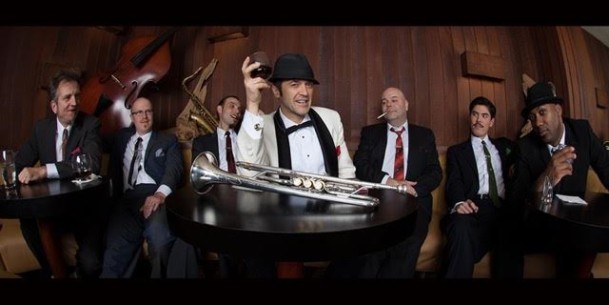 Ever since they first formed some 25 years ago, the Cherry Poppin’ Daddies made it their mission to veer from genre to genre across the musical map, choosing to follow their own muse regardless of feedback from fans and critics alike. Truth be told, individuality and defiance have always been part of the band’s DNA, and have, in turn, reinforced their rebellious reputation. Granted, though that image is well deserved, the ability to bend the boundaries has been simultaneously tempered and informed by an adherence to an older, now vanished tradition, grounded in Tin Pan Alley, Swing music and the great American songbook. According to the band’s longtime leader, singer/songwriter Steve Perry, the band’s mantra has remained the same – “the obstacle is the path”, that is, to pursue unexpected and difficult avenues that challenge both themselves as artists and modern sensibilities while at the same time adhering to standards and erstwhile traditions of American popular song.

To that point, the band’s latest opus titled Please Return the Evening: The Cherry Poppin’ Daddies Salute the Music of the Rat Pack – was designed as a challenge to their craftsmanship in the recording studio, attempting to do justice to original magnificent, orchestral arrangements and recordings, while being limited to their 8 piece band inside a small Eugene, Oregon recording studio. Please Return the Evening offers up a superb set of standards that have come to epitomize the Rat Pack’s repertoire – songs like Fly Me To The Moon, and I’m Going To Live Until I Die, that look upward with the singular optimism that energized America at the dawn of the ‘60s, a time that would prove to be the twilight of the swing era.

“We’re really fascinated by that mid century American can-do attitude,” Perry insists.  It’s in that singular spirit, a combination of attitude, affability, and desire to go all in– that’s made the Cherry Poppin’ Daddies interesting as well.

The Daddies will also be an upcoming (late 2015) album that will be called The Boop-A-Doo. This album will be the second of a planned trilogy of cover tunes designed to outline for fans some of the Daddies swing influences. The Boop-A-Doo covers a much earlier era than Please Return the Evening, songs that might have had their birth at the Cotton Club during the Prohibition era- roughly 1928-1937. Tenor banjo driven tunes like: “Lets Misbehave,” “42nd Street,” and “Top Hat” showcase the bands versatility and playing chops. Undoubtedly, the Daddies will once again set dance floors ablaze, but this time the music is destined to inspire many a manic Charleston.  www.daddies.com