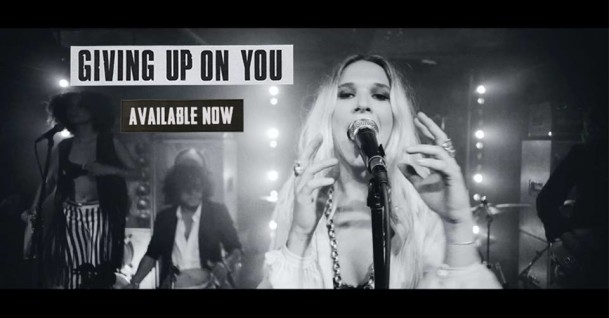 It was a Thursday afternoon and while Natalie and Elliot Bergman of Wild Belle were on their way to a sold out show at the Hi Dive in Denver, I was just coming back from the beach in Puerto Rico. They had pulled over on the side of the road so Natalie could spend a few minutes chatting with me about their new album and upcoming show at the Showbox Market on October 20.

After their debut album release Isles in 2013, the band is getting ready to share their sophomore Dreamland in January 2016. The siblings were raised by musician parents which had a large impact on them, that ultimately led to them collaborating together in a band, and then forming Wild Belle. Their lead single “Giving up on You” was released last month and the band is ready to share their new material with their fans this fall.

Natalie is very down to earth and easy to talk to and it felt as if I was speaking to a good friend on tour rather than someone I had never met before. She was thoughtful and open to my questions and I became less and less nervous to chat with her. I really enjoyed the way she spoke about her brother Elliot and I could tell that she really respects and enjoys being in the band with him. They open for Django Django this Tuesday, make sure to catch them live in Seattle.

NWMS: Where am I catching you?

Natalie: We just pulled up at the venue and I’m in the van right now

NW: How many people are in the van with you?

Natalie: Well there is Elliot, my guitar player, drummer, bassist, and tour manager

NW: It’s just the beginning of the tour right?

Nat: We’ve just started so we’re going to head all over, covering a lot of ground and we’re playing a lot of new material from our record that is going to drop in January

NW: How is it being back on the road?

Nat: Elliot and I took a year or so off to write the new record, and we’re excited to be back on the road sharing the new sound

NW: How is this one different from the first one?

Nat: There’s a lot of new sounds on the record. Elliot is really a wizard of sound so you can hear a lot of different instruments, every song has different qualities to it making it unique. He was writing a bass part in the studio in Chicago and I was writing a song, which I started to mess with the autoharp which I had 3 chords in mind. When I got to Elliot’s studio I noticed that he had the same idea of a song as I did only we created it separately. So this record has a lot of moments and stories like this of how it all came together.

NW: Tell me more about the band and your connection

Nat: I think Elliot and I draw from many similar places musically but also very different styles of music, which make the Wild Belle sound. When I was younger he gave me this 45″ by

Della Humphrey called Dream Land, I was probably around 10 years old and I fell in love with it. I became obsessed with that island sound, and that track inspired me so much that I actually names our record Dreamland from it. Elliot has studied Jazz, which is related to so many types of music and you can find those roots in different songs on the record.

NW: What a great story to share, who would have thought that a song given to you at such a young age would inspire you so that years later while in a band with the same person who gave it to you, you would choose that as a title for your record.

Nat: Elliot is such an inspiration to me, he’s always surprising me with new sounds and ideas, it’s a blessing to be able to work with him. I sound like a proud sister, but it’s true I love my brother. Do you have any siblings?

NW: I do, a younger brother Alexander that is a very talented artist but no luck in starting a band, my voice is not the best.

NW: I find it so intriguing when siblings are in bands together, because the dynamic is so intense. You’re stuck with them in a way and I’m sure that’s challenging no matter how close you are.

Nat: That’s true, you spend so much time together, writing, recording, then traveling and touring the record. We’re together all the time but ultimately we’re siblings, you can’t break that, nothing can really beat that.

NW: How does the writing process work with you?

Nat: it really depends, on this record I wrote all the lyrics, I was going through a dark time of losing somebody. We started recording the material and it was a brutal time in my life, it was winter and there was not a lot of sun in Chicago. The lyrics came from a really lonely place and the melodies came from my heart. Elliot fine tunes all of the production, he’s really the genius behind the music. I can’t wait to show you, those melodies don’t seem like music it’s more like cries of desperation that just were created as if I were a raven. I’m good now (laughs), and lately I’ve been crowd surfing which is my favorite thing to do.

NW: So you’ll be touring for a while now?

Nat: We’re playing shows then taking a little break for the holidays, and then dropping the record in January. When we put out “Giving up on You” which we recorder in LA, that is a punk rock song, people were a little bit confused by the sound at first but ultimately with my music I want to feel free when I create. I found that a lot of people will try to categorize the music because that’s how they can understand it better, but when we released that I was kind of saying you can’t put me into a box. I’m taping into a different era and a sound that I haven’t explored before and that’s how I needed to express myself.

NW: It seems the artists a lot of the time feel this restriction because people have put them in this box and once they’ve categorized you there it’s hard to move around.

Nat: Right, I think the song is growing on people and they’re enjoying the new songs. They’re getting excited for the new record and I can’t wait until January.

NW: How did you come up with the name?

Nat: Elliot came up with it actually, Belle is my middle name and it felt very appropriate to me.