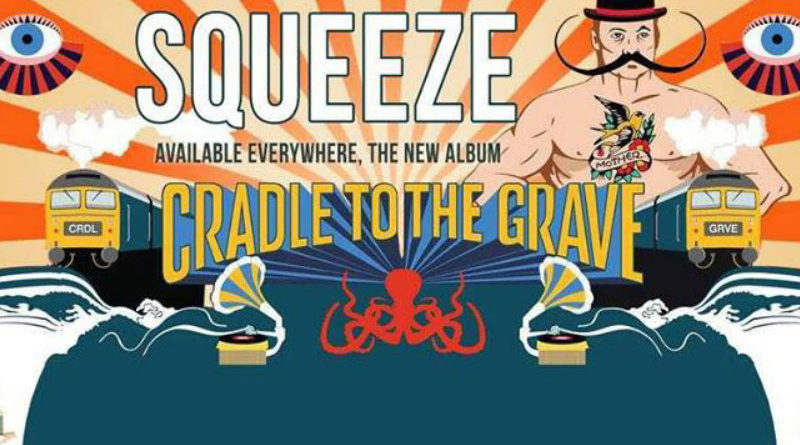 Squeeze, the seminal British pop act whose songs have tenderly and wittily chronicled life and love stretching across four decades, are launching a U.S. tour that includes 5 northwest dates, their first as a band in four years. Squeeze will be supporting their latest album Cradle to the Grave that was released October 2015 their first album of new songs in 17 years.

Following a successful, critically-acclaimed acoustic duo run in 2015 aptly titled The At Odds Couple Tour, Glenn Tilbrook and Chris Difford have now brought together the full band for a 19-date run. Tickets are on sale now with additional dates to be announced.

Squeeze have long been a captivating live act with an array of chart hits and a vast catalogue including songs such as “Black Coffee In Bed,” “Up The Junction,” “Tempted,” “Take Me I’m Yours,” “Slap And Tickle,” and “Pulling Mussels (From The Shell).”The shows will also include songs from their latest album Cradle To The Grave, their first collection of new tracks since 1998.Cradle To The Grave marked the complete and triumphant reintegration of the masterful songwriting axis of Chris Difford and Glenn Tilbrook in a beautifully observed series of fond vignettes about childhood, growing up, and the absurdities of the ride through life we’re all on.

Some of the songs, including the title track, were taking shape as the band performed their Pop-Up Shop tour in 2012 and was the basis for their first album of all-new material since Domino in 1998. Squeeze’s last studio release, Spot The Difference in 2010, saw them reworking many of their best-known hits dating back to the early days of their career, in order to give them more creative control over their catalogue.

“We split in 1998 after the release of Domino,” says Tilbrook. “Chris and I were not getting on so well, we needed a break and to follow our own paths for a bit. We slowly but surely came back together as people, and then reformed Squeeze in 2007. Originally, this was only planned as a short reunion, but things went so well, here we are eight years later. Four years ago we agreed that if we were to carry on, we really needed to work on new material.”

The group first formed in 1973, shortly after Chris and Glenn had begun their songwriting partnership, brought together by an ad in a sweetshop window. By 1977 they had made their recording debut and enjoyed a string of hits which lasted until 1982, the maturity of their songs outliving their initial burst of chart activity on the back of New Wave. Over the years there have been solo careers and occasional separations, but the Ivor Novello Award-winning songwriting duo Chris and Glenn reunited ten years ago to relaunch Squeeze and have been touring, writing and recording together since.

“We’ve grown up a lot in the last few years, musically,” continues Difford. “For the first five years back together, we were saying ‘this is where we came from’. Now, this is where we are. We still love and own our past, but as musicians we needed to grow.”

Consult the full list of dates below. For up to date tour information please visit: squeezeofficial.com.