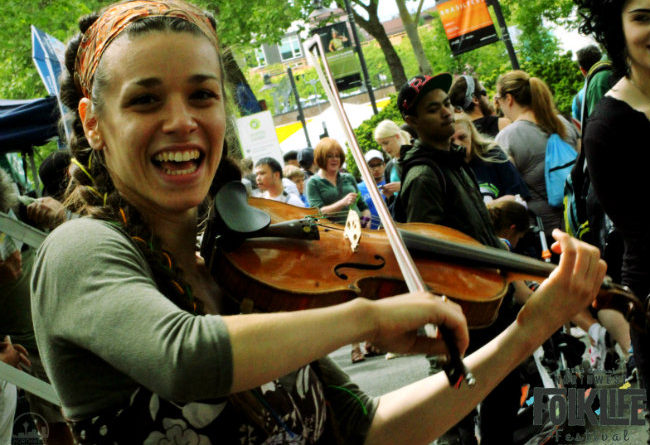 A key part of Northwest Folklife’s mission in presenting the festival is to highlight the emerging and evolving arts of the region. Sponsored by KEXP, the Indie Roots programming at the Northwest Folklife Festival is the best way to discover new artists who are pushing the boundaries of tradition and bringing in new ideas from Seattle and the Northwest’s nationally-known indie, hip-hop, and rock scenes. Here are some highlights from the 2017 Indie Roots Programming:

The Vera Project stage is the best place to explore the mix of indie rock and American roots from these great bands.

This showcase focuses on the storytelling abilities of great well-known indie songwriters.

What good is Americana if you can’t dance to it? Get up front at the Fountain Lawn Stage and shake it to these two up-and-coming roots bands from the NW.

A new tradition at Folklife, the Kindiependent Showcase brings together the best indie rock bands playing music for kids and families.

Brian Vogan and his Good Buddies

New sounds in Americana, courtesy of the Northwest music scene.

Ky Burt and the Moonlight Travelers

New this year to the Northwest Folklife Festival: The KEXP Gathering Space

In partnership with KEXP, Northwest Folklife will present two artists a day in the KEXP Gathering Space in the station’s new location at Seattle Center. Featuring:

With 5,000 performers on over 25 stages over four days, the Northwest Folklife Festival schedule is a powerfully complex creation. But here are some hand-picked highlights from the schedule to help engender new discoveries. We encourage you to go exploring to find your own new favorite band at Folklife!

These showcases are guaranteed to be a good time and will hopefully introduce you to new music and traditions from the Pacific Northwest!

Presented by Festál festival Pagdiriwang, this showcase will introduce audiences to some of the best Filipino music and dance traditions, including the martial arts of the Philippines (eskrima and kali) that have been popular in Hollywood (like the Jason Bourne films).

Working with Seattle’s jazz radio station, KNKX, and their formative show on avant-jazz, The New Cool, this showcase will feature the most innovative new jazz bands in the Northwest, each one pushing jazz forward into new dimensions. Featuring D’Vonne Lewis LIMITED EDITION, Velocity, and The New Triumph.

This innovative showcase will bring together master musicians from some of the Festál festival organizations to collaborate in cross-cultural communication. Masters from Egypt, India, Brazil, Senegal, NW Coast Native America, Ghana, Mexico, and the Balkans will participate.

The Northwest Folklife Festival is about more than just checking out new bands; it’s about participating. So take your turn on the dance floor to dance with a partner or to learn how to dance with guided lessons. Dance genres featured on Sunday at the Fisher Pavilion include the Western Swing and Alt-Country Ass-Kicker Wake Up, Sunday Afternoon Contra Dance, Cajun & Zydeco Roadhouse Dance, Sunday Sunset Contra, and Big Waltzes for the Big Room.

Curated by KBCS, this showcase brings powerhouse acoustic musicians from outside the Northwest to our region to showcase inspiration.

LeRoy Bell and His Only Friends

Despite the Northwest’s large Latin and Hispanic populations, it can be hard for those outside of the communities to find great Latin music. Folklife solves that problem by inviting three of the best Latin and Hispanic bands in the Northwest for an evening of dancing: SuperSones (Cuban Son music), Banda La Mejor (Mexican banda), and Los Tremendos De Tijuana (Mexican norteno).

Start your morning off right with a high-energy dose of Northwest gospel music. Featuring local African-American gospel legends Pastor Pat Wright and the Total Experience Gospel Choir, this showcase is a long-standing tradition at Folklife.

New to the festival this year, the Cultural Cuisine Stage is a professional stage meant for cooking demonstrations. It will be staffed by members of the Festál events this year and on Monday will host cooking demos on Italian and Iranian cooking.

Though the Northwest Folklife Festival does not have headliners and generally only accepts regional performers from the Northwest, some special guests will be arriving this year on the invite of our community partners.

This zany klezmer brass band hails from the unlikely country of Japan and are here on special invite from Honk! Fest Northwest. They’ll be part of the Honk! showcase on Saturday evening and are billed as “uniquely Japanese world music.”

Underground Legends of the Northwest

They may have gotten their start playing anarchic crust music and riding the rails, but today Port Townsend’s The Crow Quill Night Owls are one of the best ragtime and jug bands in the US. Lead guitarist Kit Stovepipe was even hand-picked by folk legend Maria Muldaur to star on a recent album. Baby Gramps is a living Northwest legend of mad folk music. Our own Peter Stampfel!

Transylvanian fiddler László Orbán used to play with the preeminent Hungarian State Folk Ensemble, and is a masterful violinist practiced in both folk and classical realms. He’s gathered a group of the best Hungarian master musicians in the Northwest for the festival.

World B-Boy Champions Massive Monkees have long held the torch high for breakdancing in the Pacific Northwest. They’ve been around since the mid-90s and are considered the pre-eminent breakdance crew in the region. They’ll be at Folklife this year as part of the Massive Monkees | Arts Corp – Massive Break Challenge.

A founding member of British anarcho-folk-pop band Chumbawamba, Nobacon has a long history of political activism in the UK. He’s been living in Eastern Washington for the past years and recently released a new album in a new political climate. He’s performing at Folklife this year as part of Ball of Wax’s Resistance Showcase.

Though not well-known outside of bluegrass circles, Northwest banjo player Harley Bray has had a powerful influence on the tradition. His family band, The Bray Brothers, was a key seminal group in the progression of bluegrass in the 1960s, and he played with Bill Monroe as well! He’s long been a key fixture of the Northwest bluegrass scene and is one of the best bluegrass banjo players around.

Fearon was a key member of the seminal early Jamaican reggae group the Gladiators. He recorded with Lee ‘Scratch’ Perry at his studio in Kingston, and bore witness to great moments in Jamaican reggae history. A longtime resident of Seattle, his closing show on Monday is the traditional way to end out a great Northwest Folklife Festival.