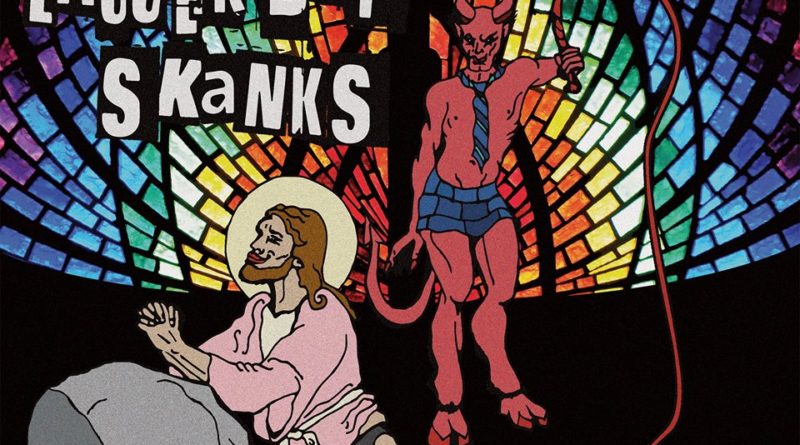 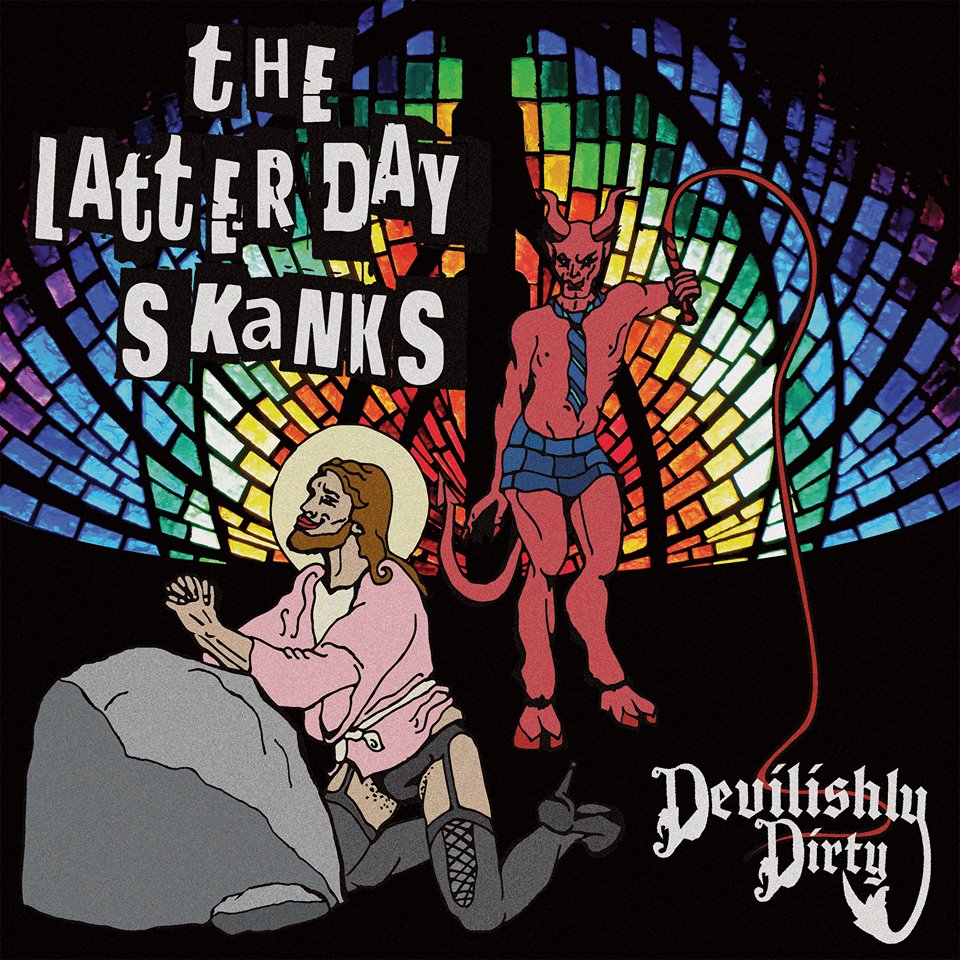 It’s not uncommon to find a band nowadays that’s trying to be the band that gives the lowest amount of fucks, not at least in today’s volatile musical climate, where artists big and small and across various genres have less pressure to conform than they ever have before, both musically and how they present themselves as personalities. However, Portland’s premier provocateurs, The Latter Day Skanks, go beyond the shallow, alienating antics other modern rock bands often use for attention, and instead use their boisterous look and loud, irreverent sound to invite anyone interested to join them for one loud, grand, glitter-throwing punk rock party you’ll walk away from with a heightened mind, ringing in your ears, and maybe a broken bone or two.

On their first release since 2015’s Neither Hymn Nor Her, the Devilishly Dirty EP, the vibrant punk trio doubles down on the heated, angry, but self-aware and endearing energy and wit that have made them one of Portland’s most enjoyable bands to follow. After Neither Hymn Nor Her, their catchiest and most direct release yet, but admittedly a record best listened to in small bursts, the Latter Day Skanks have decided to hit listeners harder than ever with a varied and concise series of tracks that are inviting in their simplicity, but aren’t for the faint of heart. All over Devilishly Dirty, there’s a very tangible urgency in the topics addressed and the emotions that fuel the EP’s six tracks, and the trio are experts at not only reaching boiling point on every song here, but keeping both their music and the listeners there for the majority of the EP’s run-time.

The speedy “Piss on Your Face” stood out to me as a personal favorite on a first listen to this EP, a track with one of the Skanks’ best choruses yet, talking about pissing directly on the faces of those who favor and help pass discriminatory bathroom laws. The band ups the song’s aggression even further with buzzing, distorted bass courtesy of bassist and singer “The Prophet Josephina Smith,” as well as flashy, impressive guitar shredding all throughout the song from guitarist and singer “Elder Bring ‘Em Hung.” This level of silly vulgarity continues on the ode to a dominatrix, “D.D.D.S.G.,” which of course stands for “Devilishly Dirty Demonic Sex Goddess.”

The band’s tendency towards living up to the name of Devilishly Dirty isn’t just in their lyrics and verve, but also in the way their music is recorded and produced. With the production on Devilishly Dirty, the Latter Day Skanks find the perfect balance between being hard-hitting and bombastically-produced while not forfeiting the raw, primal appeal of their previous work. The presence of drummer “Elder Milfred Trimley” is felt all throughout the EP, particularly on the faster, more crossover thrash-esque tracks. A slow, emotive intro to “Keep it in the Family,” which is half-sung and half-spoken word, explodes suddenly into a raging frenzy, largely upheld by the pounding drums in combination with the arena-sized guitars.

Something about “Keep it in the Family” and many other songs like it on here has a sort of to-the-point snappiness that may turn off listeners that are looking for political music a bit more nuanced, but their music is decidedly fun. Their songs aren’t exactly rocket science, but the Latter Day Skanks’ best asset is their wit and their unique taste (or lack thereof) in subtlety. Their funny and flamboyant songs, as well as their infectious adrenaline, help these songs dominate your attention while they’re around, even if they probably do sound best in the live setting, getting drunk with others, wearing fishnets with too much eyeshadow, moshing and getting the daylights stomped out of you by someone in 4-inch heels. However, while you could easily classify this EP as sweaty downtown bar music, the Latter Day Skanks do wonders in bringing the sweat, the must, and the broken noses right into the comfort of your own home.

Devilishly Dirty is the Latter Day Skanks’ most refined and ambitious release yet, but the Skanks are sounding just as raucous and vulgar as ever. The band doubles down on their message of acceptance, singular expression, and persisting no matter how terrible things get, all of which are pretty heavy topics to weigh in on, but their approach is consistently lighthearted and tongue-in-cheek, from the crushing, doom metal-worshiping intro cut “Son of Perversion (Warren Jeffs)” to the closing track, “Cat Callout,” which features the vocal contributions of five frontwomen of punk bands in the Portland area, all of whom sing and shout throughout the track about catcalling, from the standpoints of both the catcallers and those on the receiving end. All of these elements come together to create an end product that’s inviting and communal rather than needlessly complex.

Sometimes you just need a loud, stupid, stick-in-your head message with accompanying music that matches the lyrics’ no-bullshit tone, and the Latter Day Skanks have managed to manifest this formula into an EP that will please those already familiar with the Skanks’ sound, with more than enough dazzling charm to attract those that are yet to join the Church of Latter Day Skanks and become a Faithful Swallower.

(Released via Volume Bomb Records, the Devilishly Dirty EP can be purchased digitally via the Latter Day Skanks’ Bandcamp. You can sample the track “Piss on Your Face” below via Bandcamp.)