Ladies and gentlemen, and all local music enthusiasts, welcome back to the fourth annual outing of our year-end daily local music spotlight, 100 Bands in 100 Days, where every day until December 31st, we’ll be showcasing a new band or artist on the cutting edge of the Northwest, presented by Verity Credit Union. Make sure to check the #100Bands100Days hashtag at Twitter daily to stay on top of all the bands featured, and make sure to follow Verity on Twitter and NW_Music_Scene as well. Some days the featured act could be an established and locally-adored Northwest-based musician and other times they could be a band with a small following that just hasn’t had their deserved time in the sun yet. Either way, we’re fairly confident you can come away from this daily segment with plenty of new favorites. Today we’re taking our adventure to the college town of Ellensburg, WA, to look at a power pop juggernaut that leaves it all on the stage, Cobrahawk. 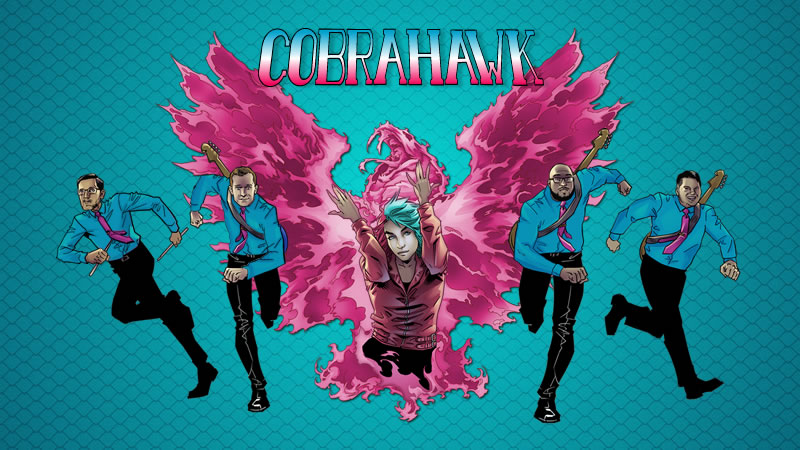 Best known for their brazen, spontaneous rock and roll, Cobrahawk is a band that would fit right in on a summer rock festival line-up circa 1994. They had humble beginnings in 2013 as ‘Walking Talking Stephen Hawking,’ a creative outlet for its members to perform a myriad of cover songs, before changing their name to the much easier Cobrahawk the following year and beginning to write original material that they could take to the stage or the studio. Listening to any one of the band’s songs, their sound instantly reveals itself to the listener: blazing alternative rock guitars ebb and flow through track after track, with lead singer Lakyn Bury’s instantly recognizable vocals taking center-stage on each track. Bury’s simultaneously melodic, acerbic, and stadium-sized vocal delivery lends a distinct charm and swagger to the band’s music that elevates their music to a new level.

Even though it wasn’t until March 2017 that Cobrahawk’s debut full-length album, Vindictive, was unleashed unto the public, they’ve made a name for themselves locally as one hell of a live outfit. Their explosive live performances take the intensity and magnitude of their studio recordings and turn it up to 11, leading to a number of impressive live appearances, including first place at the Yakima Apple Jam battle of the bands competition on the 4th of July 2017, as well as two consecutive years on the roster of Chinook Fest. Cobrahawk is still in the midst of touring Washington State in promotion of Vindictive, but for those of you that can’t make it out to a live performance, white-hot songs off the album like “Hot and Bothered” and “Wicked” pack plenty of punch for any loud rock fanatic.