Music fans of the Pacific Northwest, hello and welcome back to our third annual year-end daily countdown, 100 Bands in 100 Days, where every day until December 31st, we’re showcasing a new band or artist you have to know about, presented by Verity Credit Union. Follow the #100Bands100Days hashtag on Twitter to stay on top of all the bands featured and make sure to follow Verity on Twitter as well. Some days the featured act could be an established and locally-adored northwest-based musician that perhaps you haven’t been turned onto yet, and other times they could be a band with a small following that just hasn’t had their deserved time in the sun yet. Either way, we’re fairly confident you can come away from this daily segment with plenty of new favorites. Today’s journey takes us to one of the best country acts the Emerald City has to offer, The Darci Carlson Band. 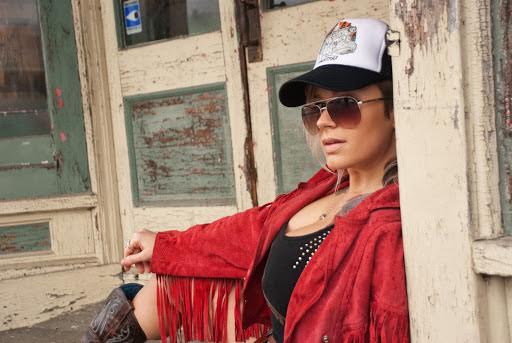 Ever wonder what someone who grew up on grunge and punk rock would sound like when they decide to make country music? Well look no further than The Darci Carlson Band. I need to be honest that it’s tough for me to write about country music sometimes these days and I prefer to just avoid interjecting too much of my opinion into what is and what isn’t country music. I view it like this: if it works for you, go for it. As a long time fan of traditional (shit-kicking) country music though, I can tell you that despite her history of the heavier side of Seattle music, she is as hardcore traditional as it gets. Carlson has a voice seemingly created just for this project. Just the right amount of twang but not in a phony over-bearing way, mix the twang with a little bit of rasp and you get perfect country vocals.

This ain’t no vanity act – And this sure as hell isn’t her first rodeo. She doesn’t care for your Top40 program – In fact, she doesn’t care much for the tastes of today’s Pop Country audience in general.
From Seattle WA, Darci Carlson delivers a lived-in voice that is both aggressive and smokey-sweet. Her well crafted songs are reminiscent of past greats Patty Loveless and Tanya Tucker – True Country music that punctuates like the aftertaste of a fine whiskey.

At the age of 12, Darci’s dad Mike bought her the guitar that would have her back through life’s ups and downs, on far away stages in distant places for many, many years to come. Her guitar teacher Michael Crouse played a pivitol role in not only the practice of guitar, but in building the confidence and determination it takes to go from a bedroom picker to a fearless front woman. However, Darci lost sight of this dream as the years passed, dropping out of the music program at Shoreline Community College, moving to Missoula MT, and leaving behind her beloved guitar to collect dust.

Thankfully Darci got her head out of her ass and moved back to Seattle WA where she started the Pop Punk band The Dolly Rottens. For years Darci was known as the lead guitar player – but it soon became common knowledge Darci wasn’t mean’t to play second fiddle to the lead – Her overpowering ‘back up vocals’ left many an audience wanting more, with the suggestive desire to hear her play solo. So, after The Dolly Rottens dissolved – solo she went.

While bartending at the world famous Slim’s Last Chance in Georgetown WA, Darci met Dan Infecto of Bob Wayne and The Outlaw Carnies – who would lead her to pursue this solo project as more of a lifestyle than a hobby. He became her musical confidant, adviser, and inspiration. Dan Infecto is known as Darci’s bass player, studio engineer, producer, and merchandiser. He pushed Darci to ‘live her music’ and dive head first into the independent music scene. Darci has since been a DIY artist, with a love for the underground self-made movement.

Through this friendship, Darci would go on to meet other artists and friends in the underground Country scene like Billy Cook of .357 String Band, Whiskey Dick, The Farmaggedon Records family, Dogbite Harris, Saint Christopher, and Bob Wayne, all of who shared the stage and platform to which Darci could pursue and develop her style of Country music further.

In 2014 Darci Carlson released her Debut EP Release Me – A year long project that was jump started by a break up that led to a 3 day day knock out of a 2 song demo, and jumping on a bill to open for Shooter Jennings. Darci was done with wasting time and was ready to take this solo project to the next level.
Since the records release, Darci Carlson has been acknowledged in both 2015 and 2016 as a nominee for Outlaw Female of The Year by Honky Tonk Hero Dale Watson’s Ameripolitan Music Awards. She was recognized for her rebellion against corporate music, DIY accomplishment, and Roots influence.

Darci has toured the country, released a music video for the title track ‘Release Me’ filmed by friend Nick Lindsay, who also filmed and directed “Temporary Girl” with her past band The Dolly Rottens.
She is proud to have shared the stage with many talented local and nationally touring artists such as Micky and The Motorcars, Dale Watson, Scott H. Biram, Weedeater, Shooter Jennings, Wayne ‘The Train’ Hancock, The Goddamn Gallows, The Calamity Cubes!, Black Eyed Vermillion, Bob Wayne and The Outlaw Carnies, Mark Pickerel of The Screaming Trees, The Maldives, The Sonics, any many more.
You may also know Darci from her work as “The Girl” with legendary ZZTOP for their 2012-2015 live show screen content. Darci was also featured on the TV show Band In Seattle with her band The Dolly Rottens.

Darci plans to record a second record in 2016 and travel the country in her RV ‘The Rockwood’ with her dog Lennon and maybe a few pet rats. Catch her around Seattle and on the road in a town near you!

(You can check out The Darci Carlson Band on Facebook, listen to the band at Bandcamp and watch the video for “Release Me” below.)