Make sure you are checking the #100Bands100Days hashtag on Twitter on a daily basis to stay on top of all the bands featured and be sure to follow Verity and NW_Music_Scene there. Some days the featured act could be an established and locally-adored northwest-based musician and other times they could be a band with a small following that just hasn’t had their deserved time in the spotlight yet. Either way, we’re fairly confident you can come away from this daily segment with plenty of new favorites. Today’s featured band is The Almost Faithful.

The Almost Faithful is a Seattle-based alt-rock trio featuring guitarist, songwriter, and lead vocalist John Feodorov, bass guitarist Hal Deranek, and drummer James Lord. The Almost Faithful’s musical persona – at once aggressive, composed, introspective, and nimble – is really an extension of the band members themselves and the wealth of experience, attitude, and musicianship that they bring to the stage.

Equal parts intellectual and edgy, The Almost Faithful skillfully weaves together thought-provoking and mordant lyrics with commanding staccato guitar riffs, intense basslines, and tight drumming to create a distinctive and complex sound that’s as raw, gritty, and exposed as it is intentional and well-crafted.

Drawing inspiration from an assortment of music artists including the Who, Pixies, Talking Heads, Tom Waits, and Brian Eno, The Almost Faithful employs unconventional time signatures and chord progressions to create complex compositions that are a natural foundation for song lyrics with substance. John Feodorov delivers those lyrics with brilliant vocal inflection that – eerie and sardonic – sounds like a cross between Nick Cave (Nick Cave & the Bad Seeds) and Ray Davies (the Kinks). The result is an alluring sound with an air of mystery to it that is uniquely The Almost Faithful.

Today’s band might be a little difficult to slap a label on as they borrow elements from several genres in creating their unique sound but it’s not hard to pick out the prog influences as you listen through their recently released debut full-length album. The songs are catchy, the musicianship is tight and if you are in the market for a northwest rock band that isn’t attempting to reinvent the post-grunge or even the grunge genre, invest some time in their new album. We are pretty sure you’ll come away a fan. Listen to it HERE. 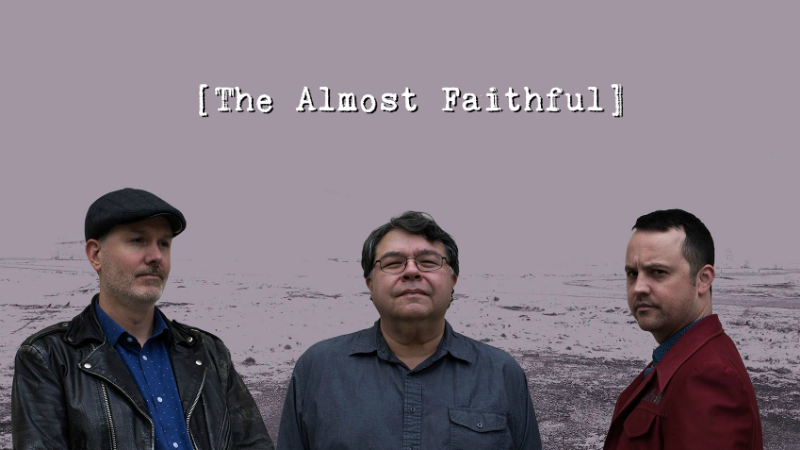 The Almost Faithful will be playing at Sunset Tavern in Ballard on December 19, 2018. Get more details and ticket info HERE.