Make sure you are checking the #100Bands100Days hashtag on Twitter on a daily basis to stay on top of all the bands featured and be sure to follow Verity and NW_Music_Scene on there. Some days the featured act could be an established and locally-adored northwest-based musician and other times they could be a band with a small following that just hasn’t had their deserved time in the spotlight yet. Either way, we’re fairly confident you can come away from this daily segment with plenty of new favorites. Today’s featured act is I Wish I Was A Punk Band.

Earlier today we premiered the catchy new song and video from I Wish I Was A Punk Band and since we liked it so much we decided to make the artist today’s featured artist in the 100 Bands showcase. Looking forward to seeing what else this talented artist has up his sleeve. 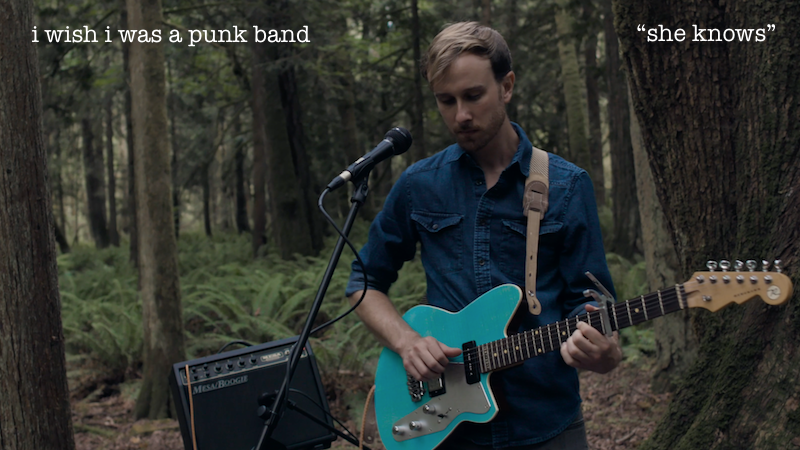 Premiering this week on Northwest Music Scene is the new video for “She Knows” from I Wish I Was A Punk Band.

I Wish I Was A Punk Band is premiering a live video performance of “She Knows” recorded on the Olympic Peninsula in anticipation of his debut album, Takeda Bleach. The video was filmed by cinematographer Garrett Parker (of Seattle band PICKWICK) amongst the ferns and firs of the PNW, providing an organic aura around an electronically driven soundscape. “She Knows” is the second release off the upcoming album with the first release, “Time Spent”, available on most streaming services starting Sept 20th.

I Wish I Was A Punk Band is the solo expression of multi-instrumentalist Phil Hamilton. Originally from North Carolina, Hamilton has been a part of the Seattle music scene mostly as a drummer with artists like DATENITE, Young Chhaylee, and Lizzie Weber. I Wish I Was A Punk Band allows a new medium for vulnerability and escapism for Hamilton and his audience. Utilizing lo-fi drum machines and stark vocal effects, he crafts intricate soundscapes under vague melodic threads to create dreamy bedroom pop. His songs pull on wisps of nostalgia as they explore the memory distortions and biases of one’s youth.

The debut album, Takeda Bleach, was recorded with Mathieu Reide of L453R L4DY Studios in Tacoma, WA, and Saman Khoujinian of Sleepy Cat Studios in Carrboro, NC, and will be released later this year. I Wish I Was A Punk Band will be touring down the west coast to support the album release with Arthur James (of Seattle band LYLE), and will kick off the tour at the Sunset Tavern on October 30th along with RX.

(Check out “She Knows” below via YouTube and get more information about I Wish I Was A Punk Band HERE.)