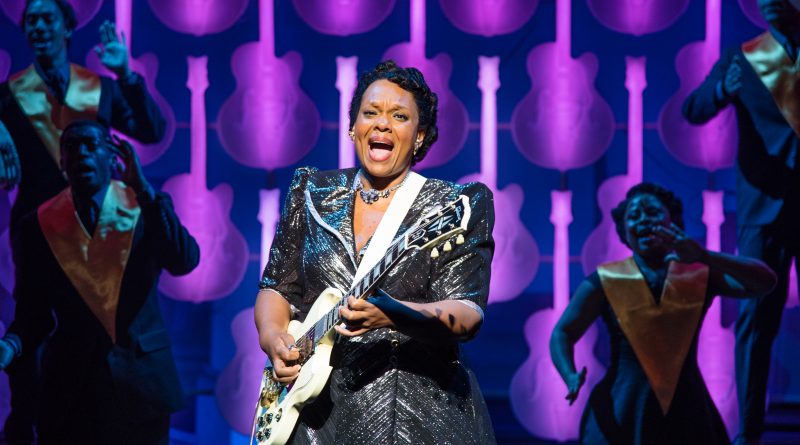 Shout Sister Shout!, now playing at the Seattle Rep, is a lively romp through the life and times of Sister Rosetta Tharpe, the legendary musician who started out as a gospel star and went on to lay the foundations of rock ‘n’ roll.

The show is staged more like a concert than a theatrical production, striking a celebratory note from the very beginning, showcasing Sister Rosetta (Carrie Compere) going strong in the mid-50s delivering a toe-tapping, hand-clapping medley of “Up Above My Head”/“Shout Sister Shout.” And with over 20 songs in the show, this is a production that really steeps you in the music.

Sister Rosetta wasn’t some obscure talent who only came to attention after her death, like Robert Johnson did. Her first records — “Rock Me, “That’s All,” “Lonesome Road” (all of which are in the show) — became big sellers on their release, and she quickly moved from performing at church gatherings to noted venues like the Cotton Club and Carnegie Hall. She was the kind of performer, popular in life, who seemed to fall by the wayside after she died in 1973; there wasn’t even enough money to buy her a tombstone for her burial. It took time for recognition to return; Gayle Wald’s definitive biography Shout, Sister, Shout! The Untold Story of Rock-and-Roll Trailblazer Sister Rosetta Sharp was published in 2007, a benefit concert raised funds for Rosetta’s tombstone in 2008, and in 2018 she was inducted into the Rock and Roll Hall of Fame as an Early Influence.

The play (which is based on Wald’s book) relates her story in broad strokes, with short, fast-paced scenes generally leading to another song. Given the number of characters that pass through Rosetta’s life (she had a very eventful 58 years), Shout Sister Shout! ends up being something of a surface look at its subject, which is frustrating; most characters are rarely developed beyond a quick sketch.

But there’s enough to give you a sense of the struggles this music pioneer faced. Rosetta’s Carnegie Hall debut was an event called “Spirituals to Swing,” and she encountered strong resistance in gospel circles for daring to make the Lord’s music swing. Not to mention that Rosetta also played a very unladylike guitar — an electric guitar to boot. And she performed nightclubs — dens of sin! One of the show’s most powerful moments comes when Rosetta returns to her church, only to be shunned by the God-fearing parishioners.

But most of the show is about the joy of raising your voice in song. Compere wowed the crowd with her powerful delivery, especially when she leaned back to hit those high notes. Carol Dennis also grabbed much of the glory as Rosetta’s indomitable mother, Katie Bell Nubin  (she also played Mahalia Jackson). And a foursome dubbed the Praise Brothers (Joseph Anthony Byrd, Chaz Rose, Timothy Ware, Christin Byrdsong) vamped, twisted, and shimmied to illustrate how gospel began inching over to secular territory. As Rosetta put it to writer Val Wilmer in 1960: “Blues is just the theatrical name for gospel. And true gospel should be slow, like we start off with “Amazing Grace.” Then you clap your hands a little and that’s ‘jubilee’ or ‘revival’ …and then you get a little happier and that’s jazz … and then you make it like rock ‘n’ roll.”

Rosetta’s skill as a guitarist is somewhat underplayed, because Compere doesn’t play guitar; she mimes while another musician plays offstage. But ipod listening stations in the lobby feature some of her work, and there’s plenty to check out on Youtube (like this clip of her in 1964, from a UK TV special shot in Manchester). And as far as generating an appreciation for her music, Shout Sister Shout! is guaranteed to bring you to your feet.