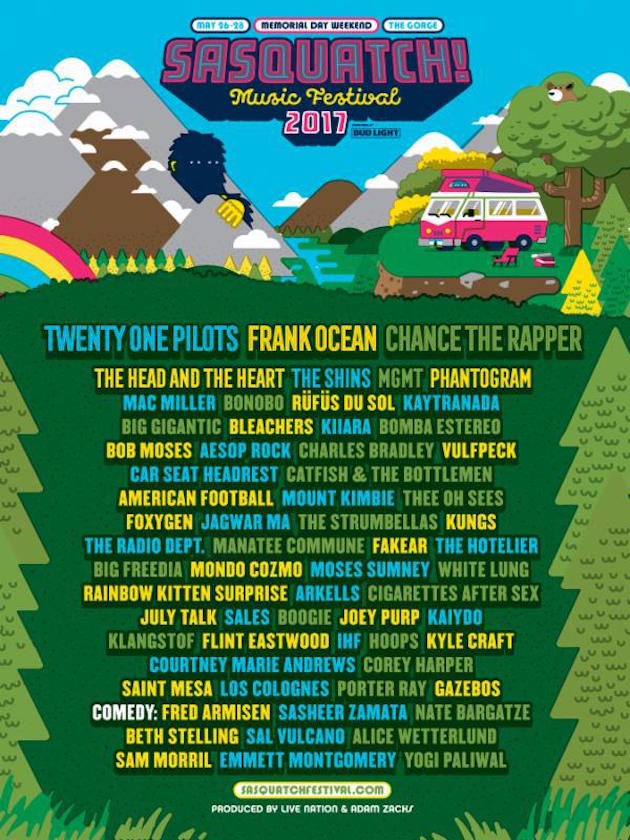 Sasquatch! Music Festival will return to The Gorge — the multi-award winning outdoor concert venue in Quincy, WA — for three days over Memorial Day Weekend (May 26-28, 2017). 3-day GA wristband prices are inclusive of fees, but do not include shipping. All camping and VIP options will be available during the early bird period, as well.

Festival creator Adam Zacks founded Sasquatch! in 2002 with the aim of building an event that caters to the eclectic tastes of voracious music enthusiasts. Personally programming the lineups for each Sasquatch! Music Festival, Zacks handpicks a diverse array of performers with a tradition of presenting critically acclaimed emerging artists alongside established headliners.

Now in its 16th year, the festival once again has a rock solid roster of performers. Contemporary art pop and alternative R&B heavyweight Frank Ocean was the first artist to be officially announced for the 2017 festival, but the first wave of artists for the festival have been announced, with Chance the Rapper and Twenty One Pilots sharing space with Frank at the top of the bill.

Read the full lineup below.

Tickets go on sale to the public HERE on January 28, 2017. Read our extensive coverage of the windy Sasquatch! 2016 here.