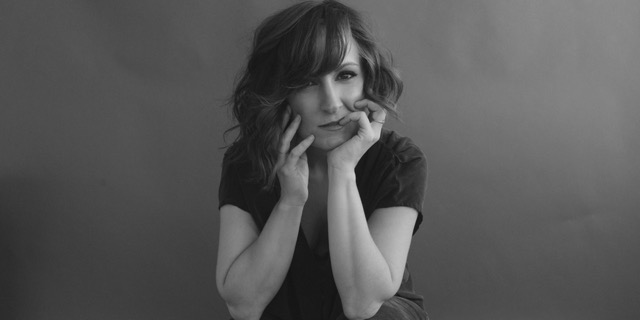 “a powerful, epic-yet-intimate collection of largely original songs and a few choice, at times surprising, covers. The overarching feeling and lyrical content reflect Gazarek’s recent romantic tumult, and her commitment to grow from the experience and reevaluate who she was as an artist and a person.” – Abe Beeson, KNKX

On vocalist/composer Sara Gazarek’s previous five, critically-acclaimed albums (Yours-2005, Live at The Jazz Bakery-2006, Return To You-2007, Blossom & Bee-2012, Dream In The Blue-2016), we hear an accomplished artist steeped in the history of jazz and blues, who effortlessly explores complex rhythmic and harmonic ideas, expressive phrasing, to-die-for range, exquisite tone, and authentic story-telling, and so much more. On her sixth recording, Thirsty Ghost (due out on August 23, 2019), we hear Gazarek’s soul. Over twelve select tunes (plus bonus tracks) we experience an un-caged Gazarek, flush with the courage, artistic volition, and musical acumen to be able to offer her audience a transformative, revelatory album that explores a more honest, messy, beautiful place – of hunger, thirst, and of wanting more. More connection, more transparency, and a more wholehearted experience that is welcomed only when one can finally address the exultation and lamentation that comes with taking a deeper look at adulthood.

Stumbling into a recording contract right out of college in 2004 not only came with big management and an even bigger booking agency — it also came with a lot of responsibility for a twenty year old artist. Gazarek quickly found herself recording, touring, and interacting with press and new fans. And, while everything seemed to be moving in the right direction, this level of visibility at such a young age actually created a certain amount of pressure to be the carefree, light-hearted girl that her mentors and managers expected. Gazarek explains, “I had been told that the ultimate goal was to craft a set of fun, light music that left people feeling happier than when they’d come in the door. And my band and I were giving it to them.”

Four years ago, Gazarek found herself standing at a fork in the road regarding her artistic direction and raison d’être. The vocalist elaborated, “I had experienced a near-death trauma in my family, there was palpable tension in my long time musical partnership, and my marriage was crumbling. I was singing mostly straight ahead songs about light hearted things, and, in a genre that prides itself in authenticity and expression, an incessant knot in my stomach told me something was about to explode. It was my dear friend and mentor Kurt Elling who, after a performance at Birdland in NYC, metaphorically took me by the shoulders and shook my soul with these very poignant words: ”I see who you are… And it’s so much bigger, so much deeper, so much more multi-dimensional than your music is right now. Don’t be afraid to walk away from what you think people want from you – and to step into all of the depth, darkness, and radiance of who you really are. That’s what we are thirsty for. The honest, messy, beautiful YOU.”

As the dust began to settle, Gazarek stood in a state of bewilderment — and, like any artist, she did all she knew how to do: she took a deep breath, and turned headlong into her art. She listened, wrote, read, improvised, traveled, sought, leapt, learned, and watched. Gazarek explained, “I finally felt ready to explore new songs and sounds, hoping to give voice to very specific experiences and, in some instances, wounds that I wanted to heal.” Gazarek worked alongside Stu Mindeman, Josh Johnson, Geoff Keezer, Larry Goldings, Erin Bentlage, and Alan Ferber, in an attempt to reconnect with her own authentic creative voice. “We began to perform these songs, and it was entirely terrifying, but necessary. And most importantly, it felt exhilarating to finally be making art that reflected what I was experiencing – music that was vulnerable and human. In the end, I internalized the idea that ‘a forest never grows, higher than the depths it knows // the warmth of sunlight comes and goes, but beauty only grows, When It Rains. (Distant Storm)”

In retrospect, Gazarek is now able to acknowledge that, while her world was falling apart, it may have felt wildly chaotic – but that now, looking back, she sees a beautifully orchestrated ballet that brought her exactly where she needed to be. “I’m finally here, living wholeheartedly in the light and the dark,” explains Gazarek. “We decided to record these songs, in the hopes that people might see their own human experiences reflected back at them, through these songs and these arrangements.”