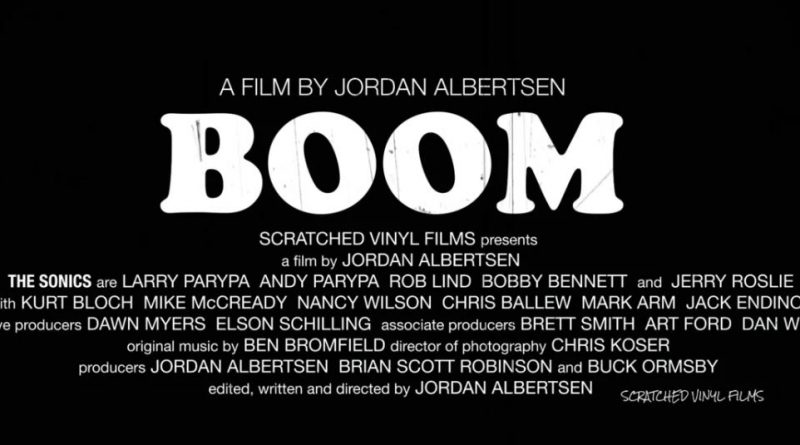 Over the course of the last three and half years I’ve been fortunate enough to catch Tacoma garage rock legends The Sonics a trio of times. One of those shows, the April 2, 2015 Moore Theatre blowout, was featured prominently in Jordan Albertsens’s highly anticipated documentary about the Grit City band that inspired a generation of rockers to get louder. While that show earned plenty of screen time in the film, there was a lot to unpack before we get to that show.

The story begins in usual rock and roll fashion. Restless teenagers needing an outlet and decide being in a rock and roll band would be a great way to release their excess energy. There is a catch to this though, the kind of music this band started to play hadn’t been played before, at least not their version of it.

Albertsen, who narrates the film, spends ample time in the beginning displaying the contrast between Seattle and Tacoma, with the band members such as founder and sax player Rob Lind, highlighting that Seattle was a bit higher brow, while Tacoma was a working class port city. The loud music that they played was fitting for the environment and the film strives to show that The Sonics were not only loud but they were on the forefront, in fact WAY out in front of the punk rock movement that would come later on.

There are some absolute gems in this documentary – from famed KJR DJ Pat O’Day telling the boys he couldn’t play “The Witch” because of the content but told them where they could get airplay, then after the song was charting regionally, finally making the decision to play it – “but only after 3 p.m.” Then there’s the tale about the The Sonics and The Shrangri-Las and how the band from Tacoma was hired to be the backing band for the famed pop girl group that was tearing up American radio at the time. The problem was, The Sonics didn’t know any of the music and the gig didn’t go so well, with The Shrangri-Las remarking to the crowd after the show that they’d like to thank their backing band, “The Curtain.”

Albertsen, who spent 10 years of his life putting together this incredible piece of work devoted a decent amount of time documenting the following that the band had unknowingly accrued in Europe, complete with interviews with record label owners, devoted fans and other purveyors of the garage rock movement. The documentary also allows early members Rob Lind, Gerry Roslie, Larry Parypa, Andy Parypa and Bob Bennett plenty of on-camera time to relive the early days of the band.

McCready states that the band “just sounded fucking dangerous,” while Wilson shares the story about how her and sister Ann would play The Sonics on their jukeboxes and have a sock hop. She continues to state that the band personifies why the Seattle sound is so diverse, explaining that even though Seattle is thought of as the birthplace of grunge, that was sort of an anomaly. Arm listed the band along with The Stooges and The Scientists as the only bands he really focused on. The underlying message behind the rockstar interviews though, was that this band was way ahead their time and cemented their place in the history of northwest rock and roll. And although they legitimately had no idea that when they stowed away their instruments in the late sixties, their name and music would live on and much to their surprise be ready for them to get back out there when the time was right.

One named we haven’t mentioned yet is the late Buck Ormsby, and without him this film likely wouldn’t have been made. Buck spends a lot of time on screen telling the story of the band and rightly so, he knew them better than anyone, and no one worked harder than he did to make the The Sonic name known worldwide. Ormsby proudly states in the film that when it comes to punk rock, the band had them all beat – and he’s not wrong. The film goes into great detail about the early low-budget recording sessions with Ormsby’s Etiquette Records, with Buck playing a huge role on how the band should sound. A few decades later, after re-releasing the material in the mid-eighties, Ormsby would head to Europe with a suitcase full of vinyl to promote the band – even though the band was on hiatus with no plans whatsoever to get back together.
Ultimately, all that work paid off because as the film goes on to prove, when these Tacoma legends did decide to come back, they had a massive fanbase in place and ready for them across the pond. After years of negotiating the band finally agreed to play Cavestomp in 2008, followed by a hometown show at Seattle’s Paramount Theater and a steady diet of touring world-wide after that.

The film does have a few somber moments though, not the least of which was the image of Ormsby standing on stage at The Moore Theatre in 2015, as the text flashed on the screen “Buck stood on stage and watched The Sonics.” followed by the next frame with the words, “One last time.” Buck passed away the following year after battle with cancer. Albertsen worked hard to show how intricate a part Buck was to this band and although he’s probably more known as the bass player with The Wailers, his behind the scenes work with The Sonics helped foster a new genre of music and a new breed of musician.

As the 84 minute masterpiece rolls the credits with “The Witch” blasting in the background, it’s clear that this film will further cement the legacy of one of the greatest rock and roll bands of all time.

10 years in the making, BOOM will get it’s much anticipated world premiere at the Raindance Film Festival in London on September 30th and then October 11 in Tacoma at Grand Cinema as the closing film. Tickets are on sale now HERE.