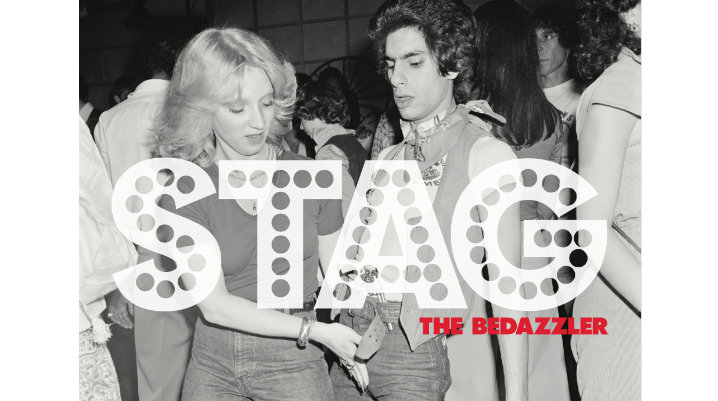 The latest recording from Seattle Power Pop purveyors Stag is a full-on chooglin’ slice of stomp-worthy boogie evoking early ’70s glam. Let’s just say Marc Bolan would be proud. A limited edition colored vinyl 45, featuring iconic cover imagery from famed NYC ’70s-era photographer Meryl Meisler, is a rager!. Recorded by Jack Endino and mixed by Martin Feveyear, the single captures the members of Stag laying down their most ambitious songwriting, and production to date. “The Bedazzler” burns hot live and will sound perfect mixed in with artists like T- Rex, Ty Segall or Eagles of Death Metal on any radio station or playlist. Hear it now in all its glory!

Stag is a band from the northwest whose making ripples in the water of Seattle rock. Formed in 2010 by a host of some of the city’s finest musicians, Steve Mack (vocals), Ben London (guitar), John Randolph (guitar), Rob Dent (drums), and Pete Everett (bass), the group is highly evolved. By mixing pop rock from the late ’60’s and early 70’s with straight ahead rock, the group has avoided the “Deathcab” stereotype and have forged their own path, “We love so many bands, it’s hard to pinpoint,” says London. Stag is another in a long line of bands that are showing the rest of the known world that there isn’t really isn’t one distinct “Seattle” sound, despite what many people that aren’t from here assume.

The song will be released on Mike McCready’s HockeyTalkter Records and will be available for purchase on January 20, 2017.

The band will also have their record release event on Febuary 17, 2017 at Darrell’s Tavern in Shoreline. Get tickets HERE and RSVP at the Facebook event page HERE.

(You can listen to ‘The Bedazzler’ below and get more info about Stag on Facebook HERE.)