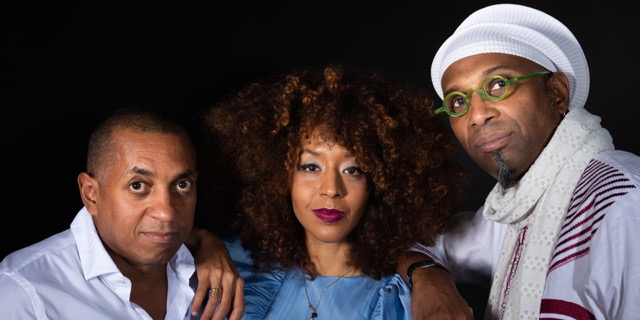 Pianist Omar Sosa and violinist-vocalist Yilian Cañizares have come together to create Aguas, a beautiful and very personal album. Featuring their compatriot, percussionist Gustavo Ovalles, Aguas reflects the perspectives of two generations of Cuban artists living outside their homeland, interpreting their roots and traditions in subtle and unique ways. Songs range from the poignant to the exuberant, and are expressive of the exceptional musical chemistry, poetic sensibilities, and originality of the artists.

The material on Aguas is an inventive and engaging mix of the artists’ Afro-Cuban roots, Western classical music, and jazz. The album is dedicated to Water, and especially to Oshun, the Goddess of Love and Mistress of Rivers in the Lucumí tradition of Yoruba ancestry known in Cuba as Santería – a spiritual practice important to both artists.

As water is synonymous with life, and energy, and strength, and space, the music of the album is inspired by the important influences of water – its hidden powers, its infinite transmutations, and its relentless creation. There is a sense, as well, for Omar and Yilian, of how water represents both separation from, and nostalgia for, the land of their birth.  The 11 tracks on Aguas were written and produced by Omar and Yilian, and recorded and mixed at Artesuono Studios in Udine, Italy by Stefano Amerio.

“Yilian is one of the most incredible talents of the new generation of Cuban musicians. She is a virtuoso, she is expressive, spontaneous and with a grace that makes her the favorite of all of us.” ~ Chucho Valdés

All those who have marveled at her fiery blend of jazz, classical and Afro-Cuban rhythms, who’ve got goosebumps from her otherworldly voice, will testify to feeling transformed. Whether onstage or on record there are few artists as impressively talented as Cañizares, a Havana-born, Swiss-based thirty-something with a respect for the past and a feel for the future – oh, and a smile to die for.  www.yiliancanizares.com

Two acclaimed albums, 2013’s self-produced Ochumare and 2015’s Invocación, helmed by Alê Siqueira (Roberto Fonseca, Omara Portuondo) have strengthened Cañizares’ reputation as a trailblazer and boundary crosser por excelencia. Not for nothing was she declared ‘revelation of the year’ by French weekly Le Novel Observateur: with her charisma, tapestry of influences and the ease with which she sings and plays violin simultaneously, Cañizares is a bona fide discovery.