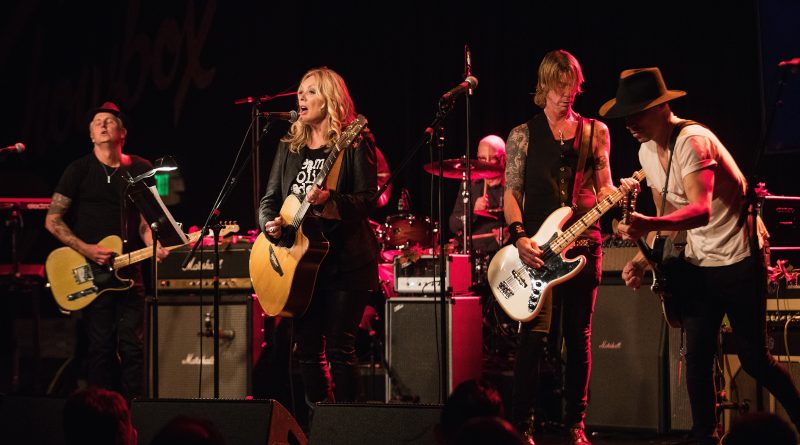 Every year Musicares, a part of the Grammy Foundation that helps people in the music industry with addiction and other medical resources, puts on a special music event and for the first time, Seattle was the chosen spot. The 2018 version was organized to not only pay homage to one of the greatest music cities on the planet but to honor one of its biggest supporters, Mike McCready. With Mike’s history with recovery, Musicares and of course Seattle, the night that was planned out couldn’t be anything but legendary.

The first to take the stage was Senior Director of Musicares Erica Krusen, explaining how important it was to do this show in Seattle. (she herself has a huge connection to Seattle via Pearl Jam) After the roll call of generous sponsors was finished up, it was time for some music and the first all-star grouping of the night of McCready, Danny Newcomb, Duff McKagan, Mark Arm and Barrett Martin started things off with a bang. Spread out across a stage packed full of gear, they fired off a blistering version of “Search and Destroy” by The Stooges. After the last note was played, Newcomb exited, leaving the four remaining rock stars to play “TV Eye” also by The Stooges, much like they did a few years ago on top of the Pike Place Market sign.

Thunderous applause greeted the end of The Stooges portion of the night, giving way to what is lovingly known in the northwest as Flight to Mars. The usual suspects came out for this one, with Mike wearing his trademark white flying Vee. As Paul Passarelli, Gary Westlake, Tim DiJulio, McCready and Mike Musburger played the first few notes of Thin Lizzy‘s “Cowboy Song” from the 1976 album, Jailbreak, the crowd had a sense they were in for something good. Although most were seated you could feel the energy somehow rising with Passarelli delivering the kind of epic vocal performances he’s known for, with the rest of the members bringing their “A” games as well. The twin-guitar attack of McCready and “Rock Tim” DiJulio completely destroyed the legendary solos in that song as they traded licks and played off of each other throughout. With zero pause, the band launched right into UFO’s “Lights Out,” once again knocking it out of the park with this lineup of friends finishing off the FTM portion of the show with one of the greatest rock songs ever written, “Love to Love” from UFO‘s 1977 album, Lights Out. If you’ve ever seen FTM, then you know how much this band puts into making these songs special, and this performance at the Showbox left most people with jaws on the floor, again. Especially those that had never previously experienced Flight to Mars.

After that epic display, a special video was shown on the screen behind the stage with all four members of Seattle darlings Thunderpussy telling Mike how much they love him and wishing they could have been there but they are on tour and the video would have to suffice. Mike clearly was moved by their message and playful display!

Next up were a few auction items, a 2014 Gibson Les Paul signed by all the members of Pearl Jam and a one of a kind Nixon watch crafted from a guitar strap from the late Chris Cornell. (still hard to type that) Those priceless items brought in a whopping $16K and $15.5K respectively and after Chris Adams had taken the last bid, he welcomed Musicares Chair Michael McDonald to the stage, who explained a bit of his personal recovery story, before asking for donations to directly help others suffering from addiction. The Seattle crowd was generous with countless people standing up with their glowsticks wanting to contribute financially. After some light-hearted banter from northwest native Joel McHale, the next set of music was ready to take over the sold-out venue.

Kim Virant, Nancy Wilson, Chad Smith, Josh Klinghoffer, Duff, Mike would play “Dead Flowers” from The Rolling Stones with Kim and Nancy sharing a mic for what turned out to be another righteous display of musicianship. As Kim sang to Mike with her arms on his shoulders, you could feel the love for this guy in the room, from the band members, to every table in the Showbox. A quick lineup change would have Barrett taking over on drums, with Nancy and Kim exiting, while Star Anna came out. The first few unmistakable notes of Mad Season‘s “River of Deceit” brought another “oh wow” moment to a night full of them. Star made it her own with a hauntingly beautiful vocal performance featuring Duff on backing vocals.

Another highlight of the evening came when Nancy Wilson wandered back out with Ben Smith and Ryan Waters, joined by Duff and Mike for a mind-blowing performance of Pink Floyd‘s  “Comfortably Numb,” which found McCready absolutely owning the universe on the guitar solos. They quickly followed that up with Heart‘s “Even It Up” with Wilson singing, providing even more northwest music epicness on that one.

Part of the reason for this gathering of stars was to present Mike with the Stevie Ray Vaughan award from Musicares. The presenter, Duff McKagan, lovingly explained how important McCready, his friend of 40 years, is to him and the world in general. After accepting the award, McCready went down a partial list of the people in the northwest we have lost and then honored Musicares themselves for the work they do to help prevent that from happening again.

@PearlJam’s #MikeMcCready accepts the Stevie Ray Vaughan Award from his friend and @gunsnroses bassist @officialduffmckagan in recognition of his significant dedication to and support of #MusiCares and his commitment to helping others in the addiction recovery process.

Following the award ceremony, Chad Smith, Rick and Chris Friel, Mike McCready and Shawn Smith threw down a monstrous version of Cheap Trick’s “Surrender” that by the end of the song had everyone singing “We’re All Alright” at the top of their lungs. A spirited rendition of “Way Of The World,” also from Cheap Trick would be next after Chad left the stage, with Chris Friel’s drumset adorned with a Shadow T-shirt, since this was now pretty much a Shadow reunion.

Next up, Social Distortion‘s Mike Ness came out with a bouquet of red roses for Mike. Explaining why he chose roses, Ness said he’d rather bring them to someone that is alive, than to bring them to one of his friends’ funerals, a poignant moment for sure. With him, Mike, Duff and Chad they played “Ball and Chain,”  followed quickly with a blazing punk rocker “Don’t Drag me Down,” another Social D song, who happens to be one of McCready’s favorite bands.

As the historic night was nearing the end, the stage was packed with most of the talented artists that had came out for the evening to honor Mike. As the band delivered a magical version Neil Young‘s “Helpless,” the crowd would be sent home satisfied with what they had just witnessed and full of much deserved love for the one and only Mike McCready.