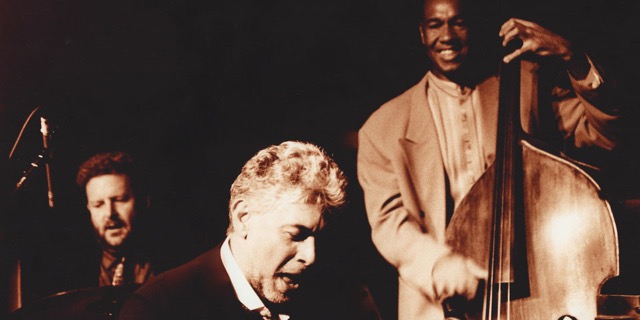 In a career spanning five decades, pianist Monty Alexander has built a reputation exploring and bridging the worlds of American jazz, popular song, and the music of his native Jamaica, finding in each a sincere spirit of musical expression. Harlem Kinston Express: Live! (2011) was singled out by both the recording industry and fans and received a Grammy award nomination in 2012. Between Uplift (2011) and Harlem-Kingston Express: Live!, Monty Alexander officially dominated the US radio charts with three number 1 spots in 2011.

Alexander has performed and recorded with artists from every corner of the musical universe and entertainment world: Frank Sinatra, Tony Bennett, Ray Brown, Dizzy Gillespie, Sonny Rollins, Clark Terry, Quincy Jones, Ernest Ranglin, Barbara Hendricks, Bill Cosby, Bobby McFerrin, Sly Dunbar, and Robbie Shakespeare, among others. Among the earliest enthusiasts for his playing were none other than Duke Ellington, Count Basie, and Miles Davis. Monty, as they say, is the real deal.

Originality is what versatile drummer Jeff Hamilton brings to the groups he performs with and is one of the reasons why he is constantly in demand, whether he is recording or performing with his trio, Oscar Peterson, Ray Brown, the Clayton Brothers or co-leading the Clayton-Hamilton Jazz Orchestra. Jeff’s recording, It’s Hamilton Time (Lake Street Records), received enormous airplay while reaching #5 on the Gavin national jazz radio chart. His trio’s second release, Live! (MONS), was nominated by critics for best jazz recording in Germany in 1997.

The trio’s second MONS release was entitled Hands On. Hamilton House / Live at Steamers (MONS) was the trio’s 2000 release. As well as recording and performing throughout the world, Jeff also teaches, arranges and composes.

John Clayton is a natural born multitasker. The multiple roles in which he excels — composer, arranger, conductor, producer, educator, and yes, extraordinary bassist — garner him a number of challenging assignments and commissions. With a Grammy on his shelf and eight additional nominations, artists such as Diana Krall, Paul McCartney, Regina Carter, Dee Dee Bridgewater, Gladys Knight, Queen Latifah, and Charles Aznavour vie for a spot on his crowded calendar.

Career highlights include arranging the ‘Star Spangled Banner” for Whitney Houston’s performance at Super Bowl 1990 (the recording went platinum), playing bass on Paul McCartney’s CD “Kisses On The Bottom,” arranging and playing bass with Yo-Yo Ma and Friends on “Songs of Joy and Peace,” and arranging playing and conducting the 2009 CD “Charles Aznavour With the Clayton-Hamilton Jazz Orchestra,” and numerous recordings with Diana Krall, the Clayton Brothers, the Clayton-Hamilton Jazz, Orchestra, Milt Jackson, Monty Alexander and many others.