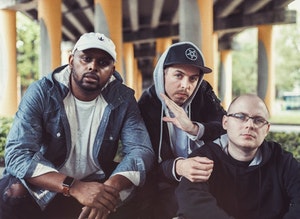 Born from three separate stars colliding with each other at the speed light, Greater Than was formed. Three minds become one as Fearce Vill (of Dyme Def), and Grynch (The King of Ballard) rap circles around a diverse landscape produced by yours truly, Grieves. This team has joined forces to slap the ever living shit out of your speakers.

Two MC’s and one DJ. Cole, Isaiah, and Beeba make up the Seattle-based hip-hop trio Brothers From Another, opening the show. These Seattle Summer Kings, known for their feel-good sound and dynamic live performances, are already a staple in the Northwest music scene and are beginning to make a name for themselves on a national scale.

After meeting in high school and opting for the recording studio over midterm study sessions, the group has gone to release over 6 EPs, has shared the stage with some of the biggest names in hip hop including Kendrick Lamar and Macklemore, and has toured the country with Seattle based artists Sol and the Blue Scholars.

Anthony Danza will also be opening the performance at the Crocodile on June 9th. Tickets can be purchased here.