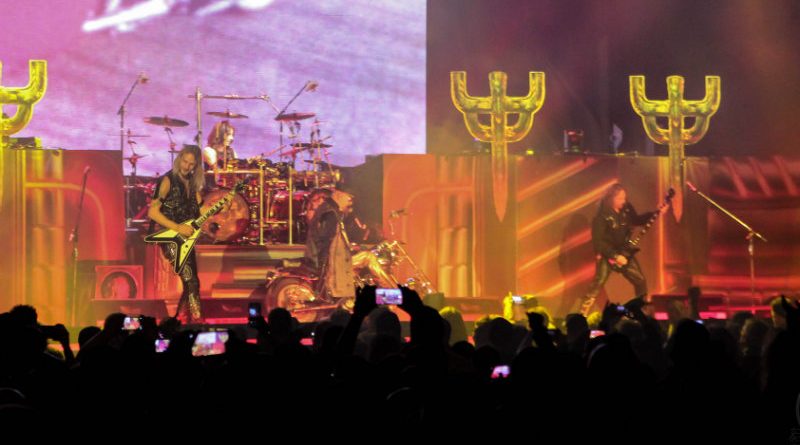 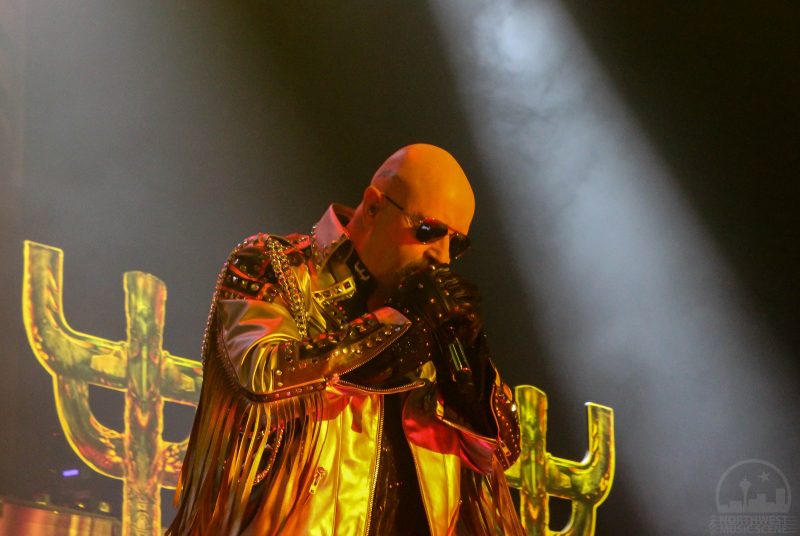 My first time witnessing Judas Priest live was a doozy. The date was June 18, 1984. The venue: Madison Square Garden in New York City. For those who may not be aware, several riots broke out during this show. Fans ripped the cushions out of their seats and threw them at the stage. Many set theirs on fire first. Others threw M-80’s and fireworks. In the midst of this mayhem, Rob Halford and the boys ripped out a fantastic show, plus an incredible encore. Following the show, the Garden tallied up $250,000 in damages and barred the band from ever performing there again. 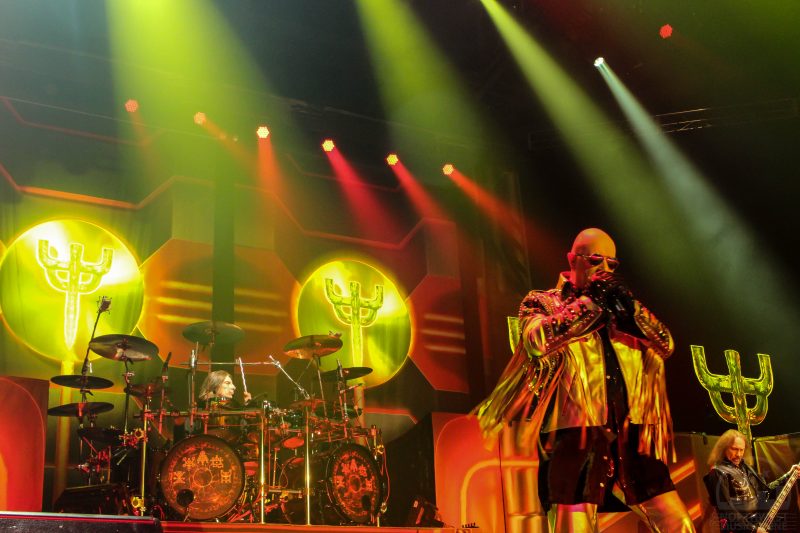 When I heard Judas Priest was touring to support their newest album, Firepower, I wasn’t sure I wanted to go. I like the album and applaud the band for returning to a more classic sound, a la Screaming for Vengeance and Defenders of the Faith, but a tour without the twin axe attack of K. K. Downing and Glenn Tipton seemed to hold an empty promise on which not even Rob’s fully-restored vocals could deliver. (K.K. retired from Judas Priest in 2011. Glenn, whose work is featured on Firepower, announced he was living with Parkinson’s Disease and would not be able to sustain a grueling world tour. Instead, he’d make surprise appearances here and there).

I needn’t have worried. The lineup (including longtime bassist Ian Hill alongside guitarists Richie Faulkner and Andy Sneap, and drummer Scott Travis) burst out of the gates with the powerful title track from Firepower, then ripped through a bunch of classics spanning their nearly half-century career. Rob took time to point out the iconic album, Stained Class, turned forty this year (really?), before belting out a chilling rendition of “Saints in Hell.” 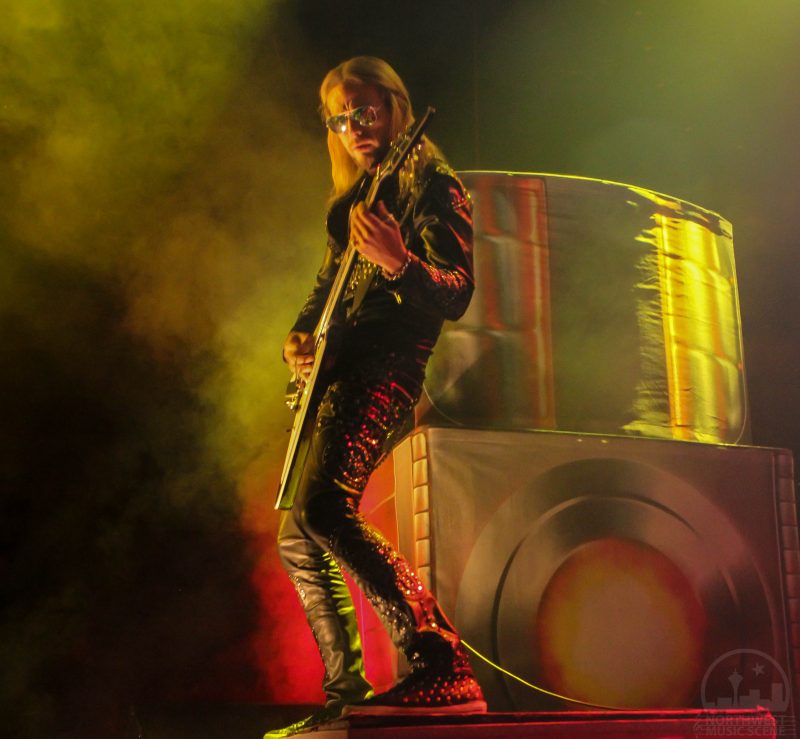 The setlist contained well-known songs from a number of albums, including “You’ve Got Another Thing Coming” and “The Hellion/Electric Eye” (Screaming for Vengeance), “The Ripper” (Sad Wings of Destiny), “Some Heads Are Gonna Roll” and “Freewheel Burning” (Defenders of the Faith), “Sinner” (Sin After Sin), to name just a few. Rob roared out onto the stage on his trademark motorcycle to kick off “Hell Bent for Leather”, then performed a blistering version “Painkiller” to close out the show.

Or so we thought.

The band left the stage and the crowd fell silent for a moment, trying to figure out what was going on. Then, a lone figure stepped onstage and started playing, slowly at first, then ripping out chords. The audience sucked in a collective breath, then screamed in joy as everyone realized that lone figure was none other than Glenn Tipton!

The rest of the band joined Glenn onstage for three hard-rocking songs from British Steel: “Metal Gods”, “Breaking the Law”, and “Living After Midnight”, which involved an extended sing along with the sold-out crowd. I don’t think I was the only one crying while singing along.

I’ve been a Judas Priest fan for nearly as long as they’ve been around. I cut my teeth on British Steel in high school. I worked at their record label for Turbo. I mourned when Rob left the band and rejoiced when he returned. And while some of their later work wasn’t to my taste, I tried to remain as faithful a fan as I could. The thought of losing Glenn on top of K.K. was nearly more than I could stand.

On Sunday evening, I entered accesso ShoWare Center with many doubts about whether this version of the band could “deliver the goods.”

Saxon has a new album, Thunderbolt, which came out this year, and singer Biff Byford’s vocals are in fine form. Like Judas Priest, Saxon mixed new songs with classics, including “Power and Glory” (from the album of the same name), and “Princess of the Night” (from Denim and Leather). A memorable song from the new album, “They Played Rock and Roll”, is written in tribute to Motorhead, which disbanded in 2015 following the death of frontman and founder Lemmy Kilmister. As Firepower does for JP, Thunderbolt harkens back to Saxon’s heyday in 70’s and 80’s. 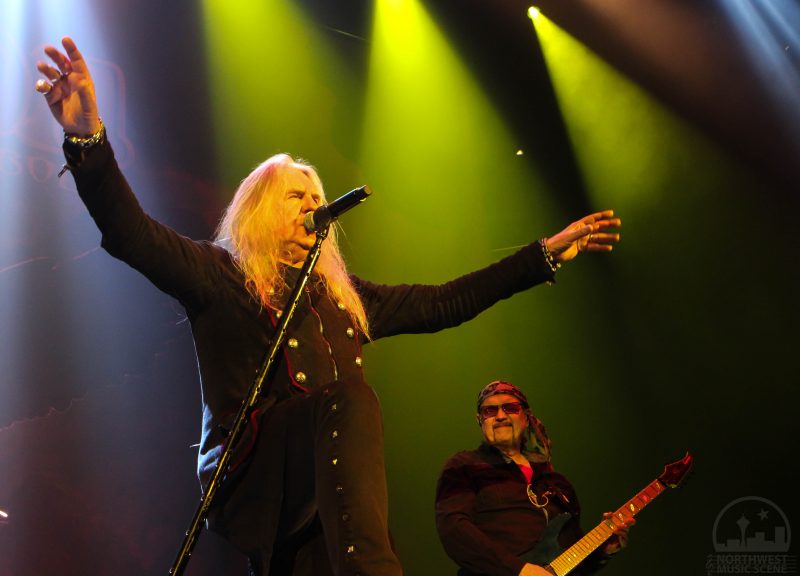 Black Star Riders played a set of mostly originals, with a few covers thrown in, including a rousing rendition of Thin Lizzy’s “Jailbreak.” The band has three albums out to date (All Hell Breaks Loose, 2013; The Killer Instinct, 2015; Heavy Fire, 2017) and their rollicking sound is reminiscent of Thin Lizzy. One can also hear vocal similarities between Ricky Warwick and the late Phil Lynott. I can’t wait to hear more from this band. 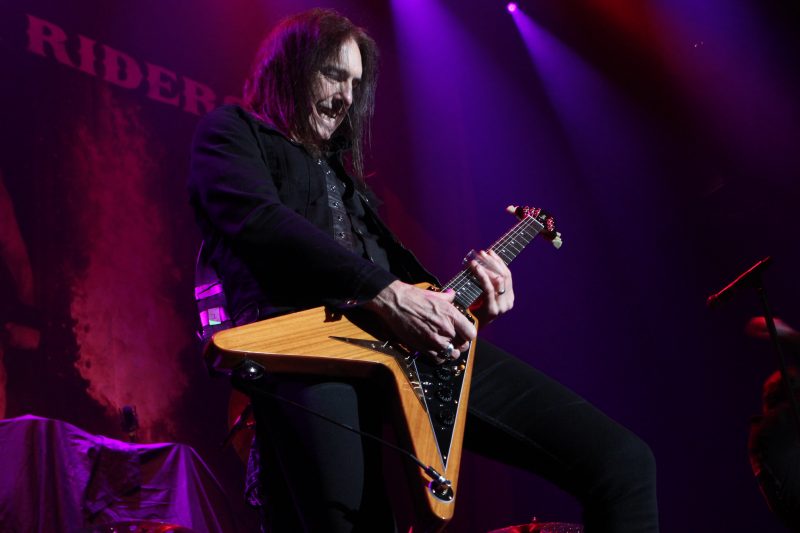