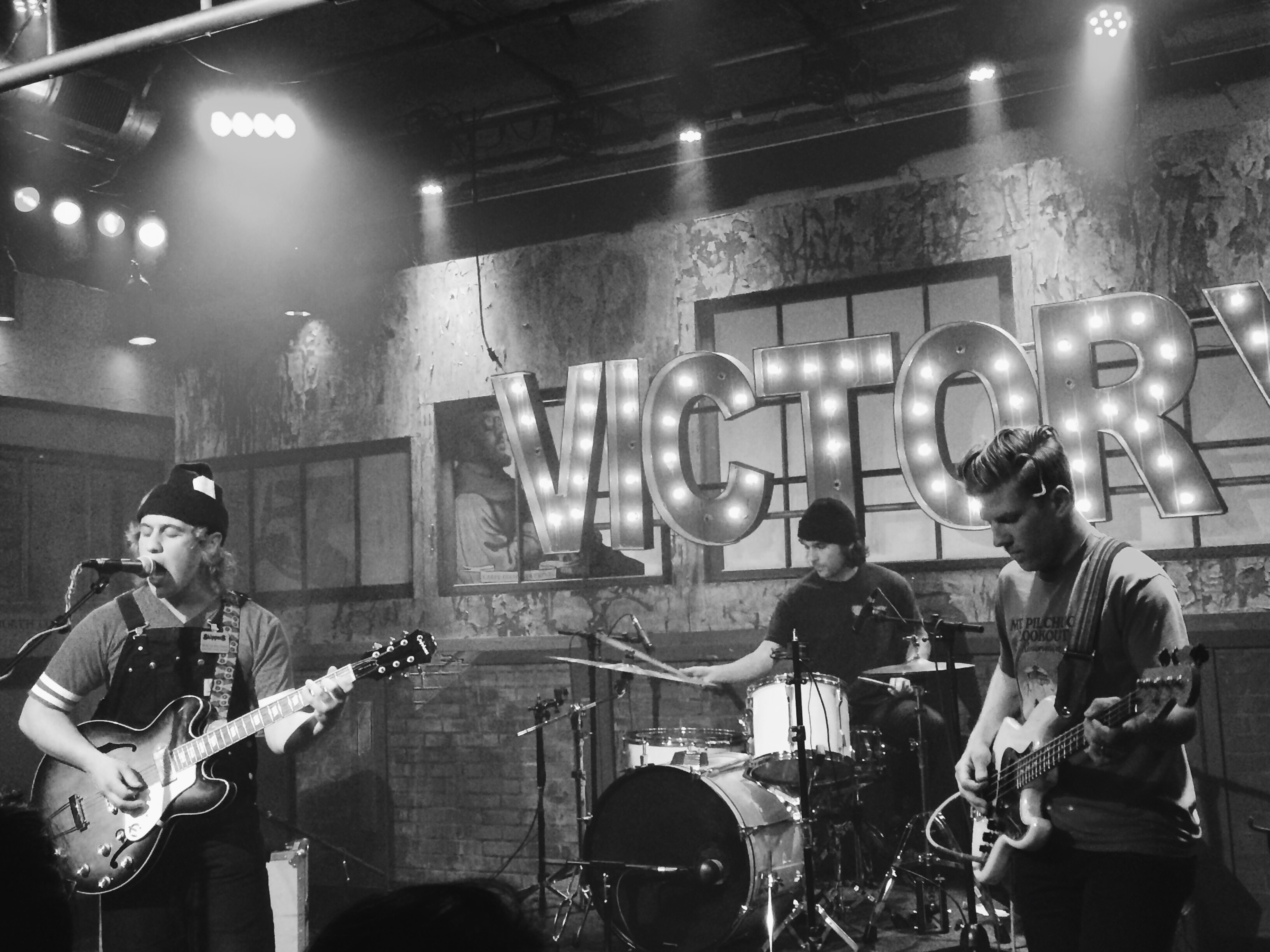 “We watched elephants walk straight out the room. What we had was nice // Mac n’ cheese two spoons,” sings Fauna Shade frontman Scotty Smith — though you’d never be able to tell given the way the music is played. Fauna Shade, an Everett-based group, shared the Band In Seattle stage with Hibou, otherwise known as Peter Michel, who hails from Seattle.

In case you’re unfamiliar with it, Band In Seattle is a TV show that features music groups from the Pacific Northwest. They film loads of people, and the public is able to buy tickets to come in and enjoy the short sets the bands perform, then watch the interview and games later as they’re being filmed.

When you walk into the building, you trade your tickets for some Band In Seattle stickers and a little questionnaire sheet titled “Band Feud.” This is a game that was played later in the night, closely resembling “Family Feud.” The sheet had about ten questions revolving around musical things like, “What instrument would you be surprised to hear in a rock band?” or “What’s something that people do in musicals that people don’t do in real life?” They take all these questions, and ask the band three or four of them based on the answers from the present and previous crowds.

At roughly 6:30, they announce that everyone is welcome to go down into the actual studio. The whole thing feels very “underground”; you walk into this large room with no windows, a stage, loads of filming equipment, crazy camera rigs, and a bar. The host Conrad Denke comes up on stage and welcomes everyone, encouraging people to take photos and share them to all their social media platforms. He explains the general layout of the show and then welcomes the first band, Fauna Shade, onto the stage.

Fauna Shade creates a huge, loud sound with only three people — Scotty Smith on lead guitar and vocals, Richie Owen on drums, and Derek Johnston on bass. They’re not the type of band that likes to spend five minutes introducing themselves, welcoming the crowd, etc., they just jump straight into their set. Fauna Shade’s sound is quite unique. Their songs are generally loud, filled with tons of reverb, and the show is based more on the instruments and melody, rather than the individual lyrics. A large portion of their set was dominated by instrumentals, and the whole thing felt like the audience was just sitting in on band practice.

Mid-set, the band played the intro to their song, “Marzipan,” when Scotty stopped playing and said “Oo, that doesn’t sound right at all,” adjusted his pedals, and picked the song back up seamlessly. The personality of the band is not lost within their performance, with Scotty constantly crossing his eyes or rolling them way back into his head, and little comments like “Happy Earth Day everybody…” between songs.

One thing that is definitely noticeable about their live performance is the bass. Derek’s playing is prominent in their sound, and it really compliments the songs. After finishing their final song, they quickly set their instruments down and left the stage. I hadn’t heard many of their songs previously, and was only really familiar with “Marzipan.” However, I really enjoyed their set, and it was easy to get into. If you’re looking for a “new old wave rock and roll” band, go check out Fauna Shade, they sound even better live than they do on their records.

Some bands have a “thing” that’s associated with them. For example, indie pop goliath Walk the Moon is known for all the face-paint that covers the band and the crowd. Hibou’s “thing” is obviously flowers. Their stage set-up was pretty standard, except for the dozens of flowers that were scattered over the amps, pedal boards, and essentially all flat surfaces on the stage. Hibou has a sound that seemed very “80’s prom music gets an electronic upgrade.” The album features a lot of bright electric guitar on top of synth sounds and an overall pop- and rock-based feel. Out of the two bands that played this night, I would say Hibou was more enjoyable to watch. With their guitars strapped high up on their chests, they were bouncing around the stage and there were probably 600 bass drops in the set. The performance was very instrumental heavy, with little lyrics, most of which drowned out by the noise of the rest of the band. The set was a lot of fun to watch, and quite easy to get into no matter how familiar you were with their music.

A short break later, the stage is rearranged to accommodate for the band interviews—this is where the personalities of the bands really came out. Fauna Shade was the first to be interviewed, and it’s impossible to miss their positive energy and bright personalities. Scotty was constantly giggling and laughing along with his band as they made jokes, not taking themselves too seriously. Conrad mentioned that Fauna Shade took  second place in the EMP’s 2014 Sound Off! Battle of the Bands, and that they’re scheduled to play at Sasquatch! 2016. After sharing, Conrad asked Scotty about the lyrics he writes. The morbid lyrics of “Jane” are read and Scotty laughs along as he explains that they’re about his cat, Jane, who is quite a violent cat. “It’s all about the eye-rolling,” says Scotty. “The lyrics are secondary.”

Next, Conrad began to ask Peter a series of questions, a majority of which he simply answers, “Yeah.” Then Peter explained how he first got into music — he started playing piano at the age of three because he wanted to be just like his older brother. “My feet would hang about two feet above the ground. Still do,” he says. When asked about the odd band name, he replies, “I was writing tunes and a little baby owl came and hung out with me. I was into that,” and mentions that the word “Hibou” means “Owl” in French. Because Hibou has such an original sound, Conrad described it as many things, such as “summer nostalgia” and “psychedelic pop,” before Peter simply stated, “It’s all just rock and roll to me.“

Finally, the night finished off with the Band Feud questions (Hibou won by two points), and some band trivia (which Fauna Shade barely won). The two bands were given large stuffed animals dressed in Band In Seattle shirts, and posed for pictures.

It was an interesting night, with two bands that had sounds that oddly similar, yet very different. If you have the chance to see either band, I definitely recommend it, especially with the shows that both have coming up in the Pacific Northwest, and as great as they sound on their records, they sound even better on stage.

(Check out a previous episode of Band In Seattle below with Seattle favorite Thunderpussy. Be on the lookout for the episode with Fauna Shade and Hibou when it airs.)