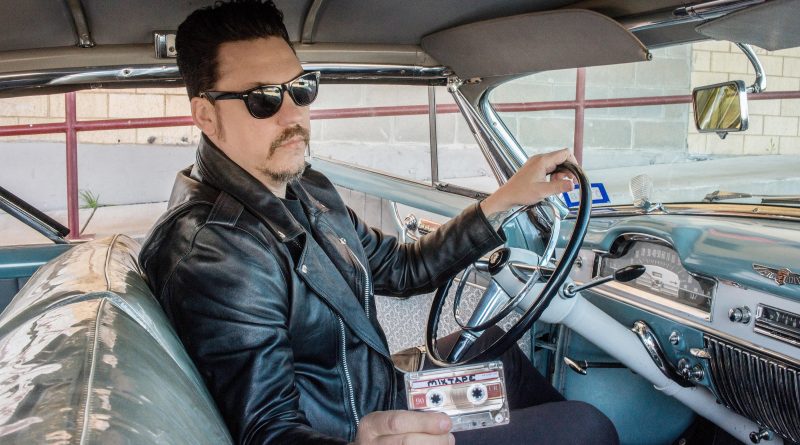 What guitarist/singer/songwriter Jesse Dayton hasn’t done in his life, would probably make a shorter list. Just see below! He’s bringing his solo act to the Tractor Tavern on Friday, August 23rd. Then he’ll travel down to Tacoma for a show at The Spanish Ballroom at Elks Temple on Saturday the 24th, and then return to Seattle on Sunday the 25th at Slim’s Last Chance Saloon. He was kind enough to take some questions.

NWMS:  What are your best, worst, and oddest stories of playing Seattle–which bands, tours, venues, other acts on the bill, etc.?

Jesse Dayton:  First time in Seattle was recording guitar for the Supersuckers record, Must’ve Been High. Their manager Danny Bland picked me up in a hearse at the airport, and by the time we got to the studio I was having an out-of-body experience on a joint of Seattle’s most potent Northern Lights. I absolutely don’t remember anything about that recording, except that it sounded great and Sub Pop was wondering why they were making a country record.

NWMS:  What are your best, worst, and oddest stories of playing all the world over?

Jesse Dayton:  One of the greatest stories of a gig was playing Bill Clinton’s second Inaugural Ball with Lucinda Williams. Lu’s father Miller was the Poet Laureate. The secret service brought us Jack Daniels. Bill walked in with a mix drink and said “Hey guys, I play sax!” Magical night.

NWMS:  You were only in your teens when you started playing live for money. Did you ever feel you were in over your head?

Jesse Dayton:  I remember playing rough biker bars in East Texas and Louisiana as a kid. I’d play guitar for whoever was paying…zydeco, country, blues, whatever. Those situations prepared me for anything. Cranked out bikers wanting ZZ Top songs, drunk cowboys wanting Texas swing, all-black clubs with hot Creole girls sitting with these huge brothers who just wanted to destroy me. Yea, I’d say I was in over my head.

Jesse Dayton:  I grew up listening to all the same stuff everyone else did in terms of classic rock, punk rock, and pop music. The only difference was, seven nights a week where I grew up we had the biggest country superstars in the world selling out right in my hometown. So I could go see Johnny Paycheck, David Allan Coe, Hank Williams Junior, all the time.

When I first got to Austin most of the guitar players sounded like Stevie Ray Vaughan, but I was into Jerry Reed. Might as well be yourself, because everyone else is taken.

NWMS:  You’ve played with Waylon Jennings, Johnny Cash, Ryan Bingham, Duff McKagan, Social Distortion, The Supersuckers and John Doe–and X.  Who’s been the kindest to you? The hardest on you? The oddest?

Jesse Dayton:  All of them have been cool to me. No weirdos or strange energy so far– knock on wood. Cash had a wicked sense of humor, but definitely had a spiritual aura surrounding him. Waylon was wild and edgy and has the best stories ever.

Bingham’s a blast to travel with and goes out of his way to make sure his musicians are happy. Seattle’s own Duff McKagan is a total sweetheart and seems very unaffected by all the “career” BS. I just signed a book deal with DaCapo, and Duff was generous enough to give me some pointers and insight on the writing process.

Playing with X was a dream come true. John Doe is like my big brother…we hang out regularly.

Jesse Dayton:  I’ve had over 50 songs in film & TV shows which has been my greatest source of income. Some of them were tiny budgets and some were big Hollywood budgets. Rob Zombie is a force of nature like no artist I’ve met, and he and his wife Sheri are as cool as anyone I’ve ever worked with. They are an amazing team the way they support each other. I learned so much watching Rob work. Those soundtrack songs were so much fun because he gave me a basic outline and then just turned me loose. I’d walk over hot coals for the guy!

NWMS:  What’s the lowdown on your own film–plot, stars, settings, music…?

Jesse Dayton:  I wrote/directed this Roger Corman-style B-movie horror film called Zombex. It stars Malcolm McDowell, John Doe, Sid Haig, Lew Temple, Emily Kaye, Tom Araya and Corey Feldman. It was the hardest thing I’ve ever done, but we sold the film and it’s done well overseas and is on Amazon Prime here. It’s a campy creature-feature for all the gore hounds & kiddos.

NWMS:  When can we look forward to your memoir?  What’s your title? Any co-authors?

Jesse Dayton:  It’s a book that’s packed with a shit load of insider stories. No bad stuff on any of the people in it but me and some of my idiotic life stuff I survived. No title yet and no co-authors, just me and my editor Ben Shaefer.

NWMS:  What are your favorite books about music, and why? How do they influence your own writing?

Jesse Dayton:  Like my favorite musicians, my favorite writers are all over the place. The subversive Americans like Hunter S. Thompson, Bukowski and Burroughs. The southern gothic weirdos like Faulkner, Capote, Flannery O’Connor, Harper Lee. Then there’s the revolutionary Russians, the romantic Irish, the surreal Latinos. I’ve always got a couple of books going. Right now I’m reading Christopher Hitchens & Timothy Snyder.

My favorite things written about music are all over the place be it books or just old articles from Creem, Rolling Stone, or wherever. I like the way Chris Morris writes about music. He’s unforgiving and gives zero fucks. The last Replacements book is genius. The great A&R man from Elektra Records Seymour Stein called me out of the blue about a year ago while I was reading about him in the Replacements book. I said “Seymour, it’s so weird, I’m reading about you this very second in a book!”. He said “well, I just heard your song “Daddy Was A Badass” in Bob Lefsetz column and wanted to talk about old country”. Weird, huh?

NWMS:  What are your plans for the future aside from all the above?

Jesse Dayton:  My plans for the future are to keep working, to keep doing what I would do for free anyway. Words cannot express how grateful I am for this crazy life of mine. I hit my knees and say thanks to the universe once, sometimes twice a day.