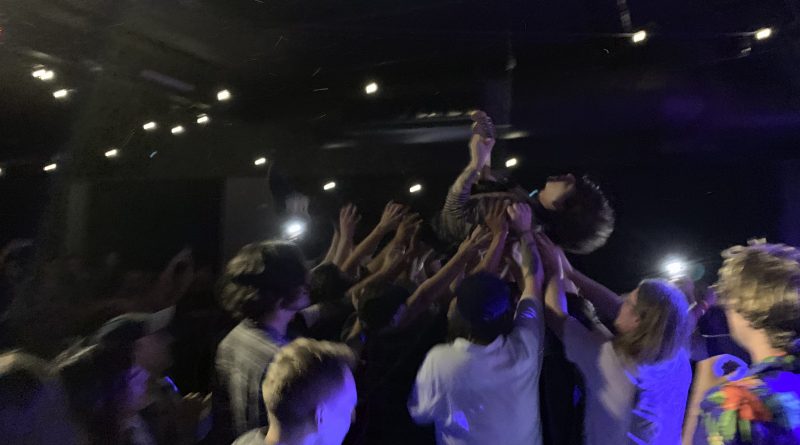 A regular Seattle Summer day with rain and overcast skies; Yet even with the weather going astray, the night lent itself to a showcase of two of the rising stars in the local scene. In a venue which felt like it was in the back of a warehouse, a local band continued its push to be the next wave of successful rock bands from Seattle – putt on a show to raise funds for their touring van.

Opening act for the festivities was Chris King without his band. Chris King has been a regular of the scene for several years, yet only recently it seems people are starting to truly appreciate this singer-songwriter. Chris King exudes an originality not only in his voice but also as a definitive representation of perseverance. Lyrically, the songs come across like a wise-sage telling stories with an intensity felt in every spoken word. With only a guitar and voice, Chris King took the audience on a joy-ride into his world and we were all left with wanting another trip. It might have seemed odd for him to open for a punk band, but the more you listened to his set, the more you realize this was the perfect complement for Monsterwatch. He ended his set with a soulful folk original with an added harmonica which he delighted the crowd with one those rare euphoric harmonica solos.

This event was for Monsterwatch, and to support their goal of touring and spreading out their musical ambitions. Monsterwatch is a ball of controlled positivity raging to be let out. They took the stage very casually, and for a second you could forget – this band is getting ready to melt your mind and to create waves of mosh pits in the crowd. Once the drummer comes in with his heavy snare and kick drum, John comes in with the punk rock angst we all absolutely need! Every song, every hit of the drum felt like it churned the entire crowd into these waves of humans moshing back and forth. There was no anger in the crowd, just smiles whenever Monsterwatch would head-bang to their songs. During one of their songs, John Spinney, the lead singer, climbs the nearby speaker cabinet and like the nightwatchman at his perch during the storm, glared out toward the crowd and started singing his song. Perched with the mic on the speaker, he lunged forward, and crowd surfed into the crowd. All the hands holding the lead-singer up and pushing him through the crowd. These acrobatic feats are only some of the things which endear this band to the locals. Monsterwatch performance is a communal gathering which allows anyone to just be you; no judging, no negativity, just pure focused energy; As their bio states, “We are here for you” and they show it with every performance.

Monsterwatch has multiple shows coming up which include performances at Pier 48, Belltown Yacht Club on Halloween and FreakoutFest in November. Chris King will be back with his band playing a show later in the month at The High Dive and in early September at the Southgate Roller Rink. Multiple opportunities to catch these bands, so go out and support the scene.

(Recommend songs: Monsterwatch – “Tuesday”, “Big Sin”…Chris King and the Gutterballs -“The River”, “Drops in the Pond”.)