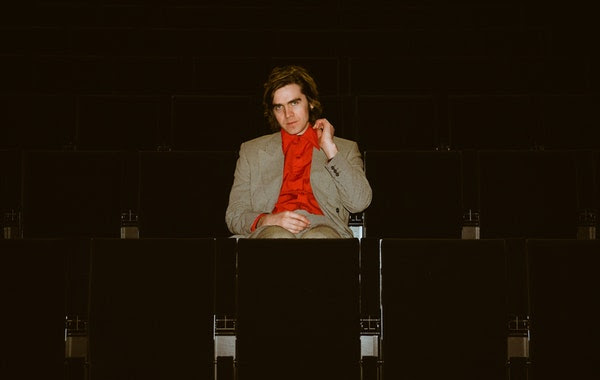 Despite a .300 batting average and a 63 mph curveball from the mound, Cut Worms’ Max Clarke was the black sheep of his baseball-centric, Midwestern family. He was drawn to the creative shadows, drawn to the basement 4-track and late nights in the art studio as much as he was the dugout. He had a born knack for conjuring warm sounds and fine images. His songs in particular crackle with the heat of a love-struck nostalgia: golden threads of storytelling, like visceral memories, woven together with a palpable Everly Brothers’ influence and 50s/60s naiveté. But the kid still has a pretty mean curve. Like one of his creative pillars David Lynch, Clarke’s songs and artwork are also curveballs with a curious underbelly.

A Cut Worms song may impress an innocent summer stroll across fields of tall grass and lavender — but there’s undoubtedly a severed ear out in there in the grass. Some unseen dark forces are always lurking at the edges of songs’ sunbursts. Bright, beautiful lap steel or a cheery harmonica accompaniment often belie an impending doom or crestfallen narrator.

Clarke didn’t necessarily seek out a life as fulltime musician. Before releasing music under the moniker of Cut Worms, Clarke went to school for illustration with the idea of a sensible career in graphic design, then took on a string of handy- man type odd jobs. Still, songwriting – that semi-secret practice Clarke had been cultivating since the age of 12 – kept gnawing at him. It was the only sort of work that didn’t feel like work. Plus, if there’s ever a time to do something as unreliable, unrealistic, and imprudent as throwing yourself wholly into music, might as well be done when you’re in your twenties.

A number of songs that make up his LP, Hollow Ground, bloomed from his time in Chicago during period of driven creativity. In particular, “Like Going Down Sideways” and “Don’t Want To Say Good-Bye” find new life on Hollow Ground, polished from their initial appearances on Cut Worms’ 2017 introductory Alien Sunset EP. Both still fizzle with a lo-fi 60s sound, but cleaned up, they gleam.

The remainder of Hollow Ground was written in Clarke’s current home in Brooklyn, where he still home-demos songs. The record was recorded partially in Los Angeles at the home studio of Foxygen’s Jonathan Rado, and partially in New York with Jason Finkel at Gary’s Electric. Clarke, who plays keyboards, bass, and lap steel in addition to his main guitar, handled most of the instrumentation across the set. He explains he’s always strove toward a specific musical aesthetic, and Hollow Ground marks the closest he’s gotten to hitting it thus far.
Hollow Ground is imbued with a sharp, self-aware lyricism; as strong as the music is here, Clarke shows an affinity for evocative storytelling, striking the balance between cerebral and simplicity. Look no further than the chiming, rollicking standout “Cash For Gold.” For a song with so much sock hop energy, it’s actually about being trapped in one’s introvert head — stuck on the couch or against the wall at the edges of the dance floor.

Sometimes, on Hollow Ground, we find characters impossibly lustful, sometimes brooding, while in other parts they fumble along, hopeful and painfully self-aware. If the music can be said to have any sort of through-line, it revolves around Clarke’s obvious delight in singing his heart out through varying degrees of agony. His songwriting both evokes and explores the raw realm of youth, its weightlessness and possibilities, but channels it through the lens of someone more restrained, who’s been through it all before. Someone who’s old enough to know better but still gets drawn back in to the romanticism of teenage feelings – and knows how to take the listener along, too.

Michael Rault is a Toronto based singer, guitarist and songwriter fronting his own eponymously named band. A gifted multi- instrumentalist and arranger, his hooky blend of pop rock refracts an evolution of guitar based music through the ages. An era-defying mischievousness defines his synthesis of jukebox R’n’B, and acid psych as refracted through the experience of an adolescence spent idolizing the clever craftsmanship of the Beatles and the wiggy New Orleans textures of Dr. John in equal measure.

After releasing a number self produced efforts on a handful of Canadian independents, Rault caught the attention of Burger Records in 2014. Still Not Sad b/w Nothing Means Nothing marked his debut cassingle on the label and earned rave reviews from publications like Spin, Stereogum & NME. Produced in collaboration with members of Fucked Up and Slim Twig (the DFA recording artist who’s band Michael also performs in), yet written and performed entirely solo – Still Not Sad / Nothing Means Nothing further rarefied Rault’s economic and modernized take on classic rock tropes.

Having found a complimentary niche in the fuzzy, garage-centric Burger Records underground, Michael is poised to finally unleash his Living Daylight LP, recorded late 2012 into early 2013.

As a recent transplant from his native Edmonton, the album is a melodically adventurous take on a classic theme – leaving home to make your way in the big city. Produced and recorded in collaboration with Renny Wilson (Mint Records), Living Daylight is a dynamic fusion of the past and future. An inclination for early Rock N’ Roll is perverted by a heady production sensibility akin to the warped contemporary psych of Tame Impala. As a document of oddball DIY songwriting Living Daylight (which will be released April 7th 2015) fits nicely in the lineage of records created by Ex-Edmontonian contemporaries like Mac Demarco or Sean Nicholas Savage. Expect a busy year in 2015 for this dynamic instrumentalist and performer.