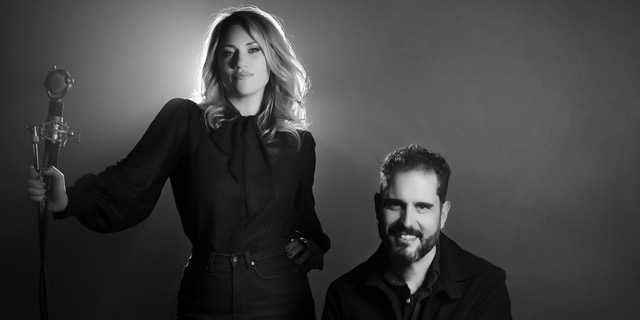 KNKX 88.5 and Dimitiriou’s Jazz Alley welcomes guitarist Charlie Hunter and vocalist Lucy Woodward in support of their new release MUSIC!MUSIC!MUSIC! for one night only. Show starts at 7:30pm, doors open at 6:00pm.

Soulful, spacious and deliciously in the pocket, Music!Music!Music! reverberates with the thrilling intensity of the duo’s live shows, and crackles with the electricity of two talented performers stretching out together from their respective comfort zones. “It was just fun, man,” says Hunter of the recording sessions. “I’ve done so many records in my lifetime, everything from jazz to working with hip-hop people, really avant-garde stuff — but this is the first record I’ve ever done that is really a partnership with a singer. I’m really happy with how it came out.”

With a career spanning 16 years and almost 20 albums, Charlie Hunter consistently ups his game as an innovative writer and bandleader. He has worked with the likes of Norah Jones , Mos Def, John Mayer, D’Angelo and countless others. He is widely considered the authority on the seven and eight – string guitar, and continues to stun audiences with his ability to simultaneously bust out tasty bass parts, melodic leads and swinging rhythms.

Charlie Hunter has previously recorded for the venerable Blue Note label, Concord, Ropeadope, GroundUP and others. His recent independent venture is steered by his motivation to release music that most inspires him. Critics have touted his genius technique, but it’s his profound artistic sensibility that propels his original music. Hunter’s signature style of writing and performing has secured his place as one of today’s great guitarists.

Born in London, Lucy Woodward spent her childhood in New York and Holland. She is the daughter of two classical musicians – her father a conductor and composer, her mother an opera singer, musicologist, teacher and bellydancer. No matter which household she was living in, she was “always music-making and creating.”

After several albums of her own, Lucy was asked to tour as a band member filling in for the lead singer of Pink Martini learning songs in Turkish, French, Croatian, Japanese and Spanish with 6 days notice. Lucy’s dates with Pink Martini varied from Montreal Jazz Fest to singing with the San Francisco Symphony for several performances.

Lucy began to work with Snarky Puppy bandleader Michael League, who played bass in her NYC band at the time. She started opening for Snarky Puppy (with them as her backing band) and was featured on Snarky Puppy’s Family Dinner, Vol. 1 album singing the hauntingly bluesy “Too Hot To Last”. The album earned them their first Grammy and the song now has over 1.2 million views.