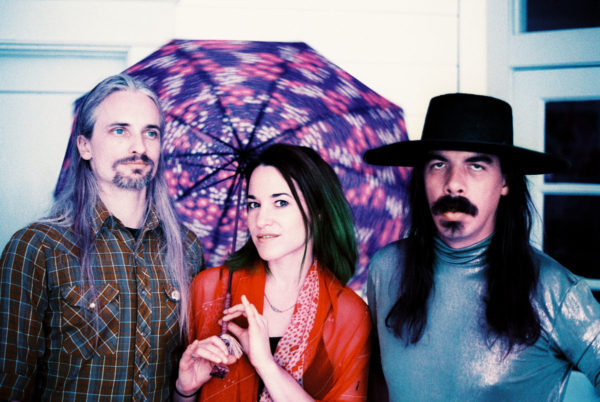 Contemporary experimental, adventurous rock outfit Megafauna is currently on tour supporting their 4th full length album Welcome Home, produced by Curtis Roush and Bright Light Social Hour, and will be available on May 27th. Formed in 2008, Megafauna is fronted by singer/guitarist Dani Neff, bassist Will Krause and drummer Zack Humphrey. If you are ever in the mood for some good hard rock that will challenge as much as it’ll please, just push play and let the music take over your ears.

We had a chance to talk to Dani and Will while they were on their way to Phoenix. They’re set to play the Crocodile on May 13th with local acts Rishloo and Ten Miles Wide.

NWMS: I know you started the band in Austin, do you still live there?

How do you find living there? How were you influenced in your music?

Dani: I’m originally from Connecticut, but I think it’s great having all these great bands around you can check out and really good musicians to play with.

How did you decide on Megafauna for the band name?

Will: It was actually a friend’s basketball team name, which means big animal, but I thought that’s what we sounded like when we first start jamming together.

What was your musical background growing up?

Dani: I started playing when I was pretty young around 10, and then I would sit in with my guitar teacher’s band, that was a blues band, then formed another band in college, then when I moved to New York started another, and then once in Austin I met Will and started this in 2008. Will’s been in a few bands himself as well.

Will, did you grow up in Austin or also move there?

Will: I grew up on the Gulf Coast of Texas and moved to Austin in 2003.  Went there for college and really liked it, so I decided I didn’t want to leave. I started playing around 12, I saw an orchestra when I was in fifth grade and thought it was the coolest thing ever, so I started playing in orchestra. Then a guy was putting together a jazz band in town, but no one played the bass, so he offered to teach me for free.

How does the writing process work for you? Do you write as a band or individually?

Dani: It depends on the song. Sometimes we write as a band and others one of us will come in with a riff and work on it.  I’ll sometimes come in with a song that is almost done and the guys will come up with their parts.

Do you find yourselves writing while on the road or is that done more when you’re back home in your space?

Dani: Tour is very exhausting and we don’t get that much time to write, we’ll have ideas but most of the writing happens at home.

Will: There isn’t much time to sit around and play as you’re constantly on the move or getting ready for a show.

Tell us a little more about your new album coming out.

Dani: We’re really excited about it, we recorded it with some friends of ours in this band Bright Light Social Hour that is based out of Austin. It has more psychedelic elements to it, we used a whole bunch of vintage gear, and engineers that have worked on previous albums.

I didn’t know you worked on the with BLSH until I read about it last week and I thought that was pretty cool, I really like them as a band. Was this the first time you’ve worked with them?

Dani: Yes, this was the first album they produced for us, but we’ve been buddies with them for some years now.

How was the collaboration born?

Dani: We were out about a year ago discussing our new material and they offered to produce us, so we did it.

You’ve just started your tour a few days ago, how is it going so far?

Dani: It’s been great so far, it’s good being on the road, people are having a good time and looks like we’re selling a lot of vinyl at the shows.  I can’t wait to make it to the northwest, it’s one of my favorite parts to tour.

What is your plan once this tour ends?

Dani: The plan is to go East in August and come back down again, and maybe head over to Europe, along with some festivals.

What do you guys think of Austin City Limits? I’m guessing you’ve been.

Dani: Actually, Will and I went there in 2008 shortly after we met and had a blast, saw a lot of great bands.

What do you miss the most when you’re on tour?

Will: Honestly, time to chill out and be by myself, which you don’t get a whole lot of on tour.

How many people do you have on tour?

Dani: It’s the 3 of us but we have a 4th coming out to play some shows with us on synth and guitar. It adds more layers since we used a lot to record our album so the sound is fuller.

What are some of your hobbies outside of music?

Dani: I like to do yoga, meditate, seeing other bands, and reading/writing.

Will: I like riding bikes a lot, and I enjoy seeing other shows quite a bit.

The band will also stop by Medford, Portland, Vancouver and Spokane as they tour the Northwest, check out full details on their site.