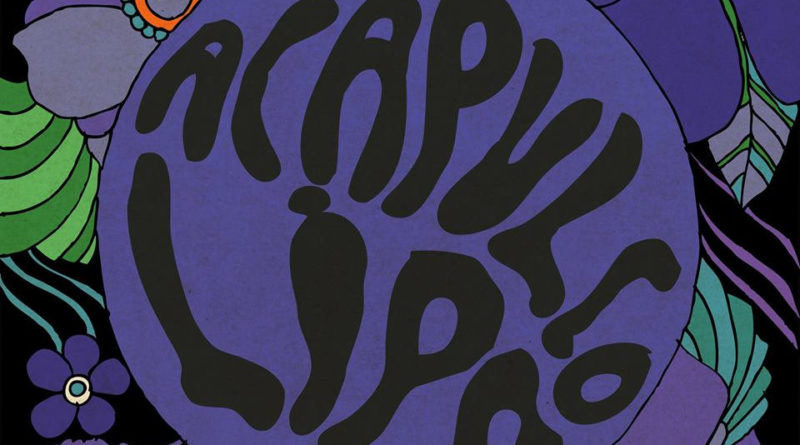 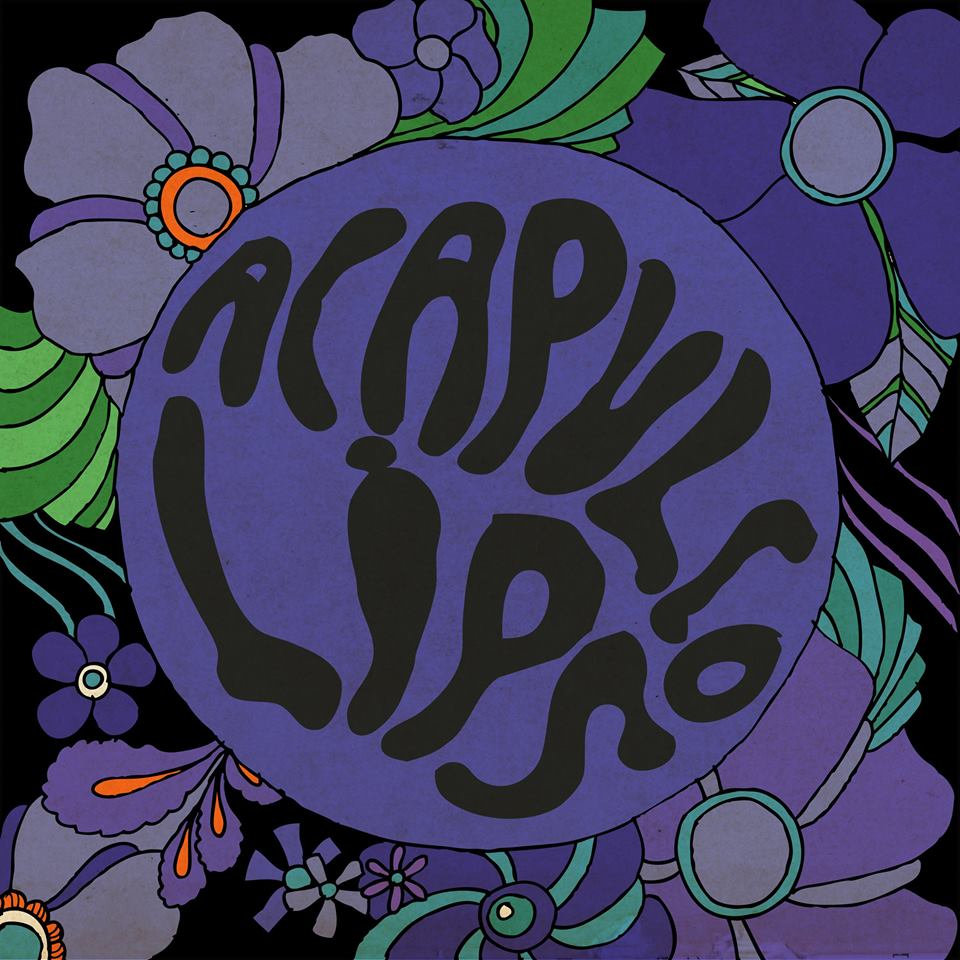 Never have I before come across a post-surf rock act of any kind in today’s day in age, until of recent. It was indeed a warm welcome, and unlike anything I’ve seen before. They go by the name of Acapulco Lips, and have recently introduced me into the exciting and infectious sounds of garage-rock and psychedelia that pays homage to the extraordinary period of what was essentially just “surf rock.”

A few months ago, I had the pleasure of seeing the band perform at Band In Seattle over in Victory Studios; I was blown away, to say the least. The tone and sound the band’s guitarist Christopher was responsible for was immense. It hits like a wall of sound, soaked in vintage reverberation. This is further complemented and accentuated by bassist and vocalist Maria pioneering as frontwoman, with drummer Davy plowing through each track. Altogether, they present a huge sound in driving surf-y punk rock songs. After their spectacular performance, I naturally had high expectations for their newest self-titled LP.

“My Time” kicks off as a strong, surf rock track that instantly establishes the band’s unique sound, along with the sounds the rest of the album encompasses. With the opening of the crashing drums and the screeching reverb, this track offers a great representation of the authenticity and raw energy that the band presents throughout the album as well. It’s easy to see that the Beach Boys have also had a significant influence on the band’s sound, as the track pays tribute to the guitar line on their song “Wipeout.” The band wastes no time introducing their hard and full-sounding album opener, as an appropriate segue for what is to come throughout the album.

“Awkward Waltz” is definitely one of the most interesting songs on the album. It is unique among the other tracks, but is still captivating. On the track, it seems as if they have opened up a new door for themselves and their sonic aspirations while taking a step towards the unknown; something different. The track seems instantly radio-friendly, while embodying and presenting a subtle tint of melancholy and mystery. It is engaging through this mystical element and reflective, as it seems to “reveal” something within the song that ironically “reveals” or surfaces some kind of thoughts or emotions within the listener just by listening to it. This is may be due to the minor key that the song is in, with an amazing incorporation of the keys that further complement and accentuate the melody and feel of the song.

The vocals in this track are also less intelligible, unlike the previous track. This seems to be a theme that further reoccurs on other tracks on the album. The way the vocals are presented bring to mind the first two Tame Impala records, where the vocals are used to highlight colorful melodies, rather than being upfront.

The next track “Wake Me” sounds like a sun-drenched twist on Katheleen Hanna’s vocals on Bikini Kill’s “Rebel Girl.” The vocals on this track are more present than the previous track, however fall back a little further in the overall mix. An anomaly, as they don’t receive too much attention like the conventional standard of vocals, but they lie in such a position so that you can only hear “what you need to hear.” The chorus has a strong melody/hook, and is complimented with backing vocals from the rest of the band.

The Beatles’ “Tomorrow Never Knows” is referenced in the opener of the next track “Gotta Know,” through the use of the droning tamboura that comprises the intro. The band shows off their strengths in being able to belt out catchy songs, while incorporating unorthodox instruments that typically don’t appear within this genre of music. The vocals are the clearest on the album so far, and mark a strong performance, which I’m sure Maria takes pride in.

“Tonight” is a venture that shows the band’s capability to write a jolly doo-wop surf tune that is sure to captivate listeners and get them thinking about, well, of course, tonight! At first it gives the impression of being a love song, but with lyrics such as “Tonight I’m not coming home//Tonight you better leave me alone//Tonight will be the night that I roam//Tonight you’ll be sleeping all alone,” it seems as if it is a mantra for separation and independence. It seems that this song follows an unpleasant event with a significant other or crush, and is interesting how they have taken that stem and nurtured it into a hearty and merry sing-a-long tune.

“Shoes On” is another strong track that sounds like it has come right from the 60’s psychedelic period. Its sound is reminiscent of the mid 60’s psychedelic group The 13th Floor Elevators. Particularly the main riff in “Shoes On” is reminiscent to what the group had established a long time ago. It’s pleasing to see once again how the band has utilized and revolutionized that style and reintroduced it in this day in age.

The group deviates slightly from their traditional surf-rock sound and exchange it for a garage-rock/punk-rock vibe on “Hangover Blues.” The track is a hard, aggressive and fuzzed out head-banger. Some of the guitar solos introduced pay homage to the great Kurt Cobain through the distortion and pedal-heavy effects that resemble some of the sounds Kurt experimented with on “Endless Nameless” and “Aneurysm.”

Maria exchanges the spotlight on vocals with guitarist/backing vocalist Christopher as he fronts the next song “Marching of the Bees.” The reverberation helps give way to the tone and aesthetic of his voice, which is somewhat lost through the intentional manipulation of pushing his vocals back into the mix. Maria comes back in to join him in the pre-chorus and the choral hook and compliments Christopher through her harmonies and reinforcement on the chorus melody. It’s great to see them singing together on a track to further display what other roles they can fill altogether as a band.

The final track of the LP, “No Longer,” appears to be a sequel in many ways to an earlier track, “Tonight.” They seem like “sibling” tracks; as they both have the same vibe and possible message/intention. “Tonight” seems to be about someone who is done with someone else, and is taking a stab at moving on through independence, whereas “No Longer” is the next chapter in the story, reinstating their drive to continue onward where they are “No Longer” a victim of pain. The song has a bit of pensiveness to it, but is mostly obstructed through the cheery melody.

“No Longer” also bears a strong resemblance to the Red Hot Chili Peppers’ cover of Dion and the Belmonts’ song “Teenager In Love,” but with the surf twist that the Acapulco Lips are known for. No matter how coincidental or uncanny they two songs may sound, they are still notably distinguishable and incredible in their own right. With that being said, the similarity between the two has also even enhanced my love for each song. To say the least, “No Longer” is a great album closer that proposes a strong and joyous melody that also brings the album to an acceptable point of closure.

It is truly an amazing experience to not only go and watch a band perform new material, but to experience the album that the songs derive from as well. The live and recording sides of an album can either be different, or the same. To experience the two unconditionally is the entire essence and primary objective for what the band is doing. For me, I have been fortunate enough to not only listen and expose myself to their newest LP, but to see them perform these songs live as well.

The album is indeed a strong and composed compilation of songs from a certain time that each tell a story independently, and collectively. If the band hadn’t already before established their ingenuity in writing raw, high-energy rock songs, then this album certainly is a defining point for them. By combining many genres that most people would think are wholly different stylistically, they have created a new sound altogether; something innovative and authentic.

(Acapulco Lips is available for purchase through acapulcolips.bandcamp.com. Watch the music video for “Awkward Waltz” below.)