Music fans of the Pacific Northwest, hello and welcome back to our third annual year-end daily countdown, 100 Bands in 100 Days, where every day until December 31st, we’re showcasing a new band or artist you have to know about, presented by Verity Credit Union. Follow the #100Bands100Days hashtag on Twitter to stay on top of all the bands featured and make sure to follow Verity on Twitter as well. Some days the featured act could be an established and locally-adored northwest-based musician that perhaps you haven’t been turned onto yet, and other times they could be a band with a small following that just hasn’t had their deserved time in the sun yet. Either way, we’re fairly confident you can come away from this daily segment with plenty of new favorites. Today’s band isn’t the sort of band you see every day. Portland is no stranger to weirdness, but the glam and pomp of today’s band is enough to make most of them look about as eccentric and vibrant as the Dave Matthews Band. Meet The Latter Day Skanks. 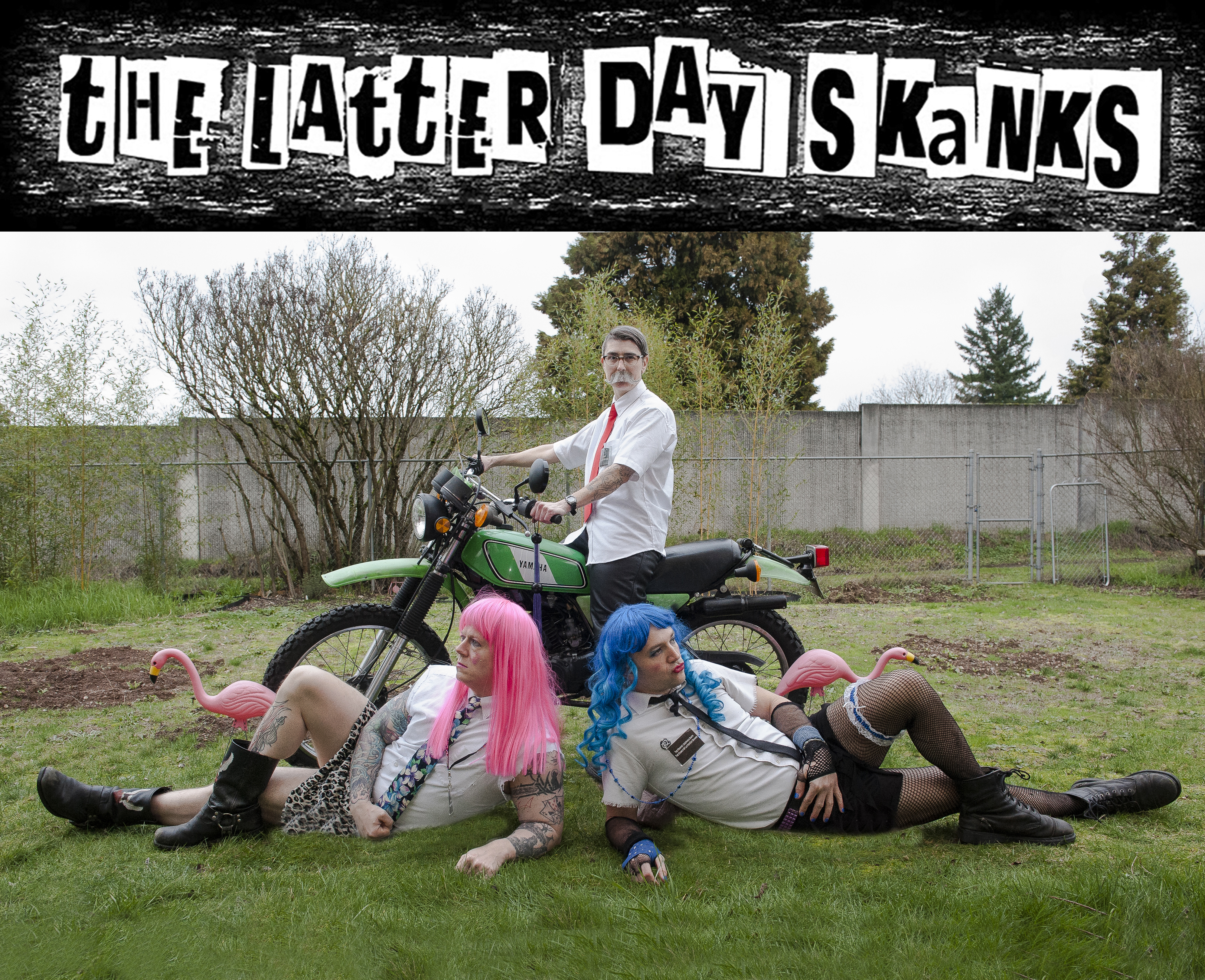 The origin of the Latter Day Skanks can be traced back to an ordinary Church of Latter Day Saints, where a group of two young Mormon boys and one Mormon girl met, the three brought together by their unified quirkiness and love of rebellion and nonconformity, which was a big no-no amidst the other LDS church members. The anguish and self-destruction that came from this pressure led to the three deciding to excommunicate themselves from the church together, and the three ex-Mormons did what all of us would’ve done if we had finally broken free of the clutches of age-old religious practices: form a kick-ass punk band that dresses in drag and preaches messages of self-acceptance and self-discovery, all the while fitting as many overtly sexual references into their songs as they possibly can. Even just skimming the track listing of one of their albums, your eye will surely be caught by song titles like “Mary of Magdalene Had a Cock” and “The Moral Thigh Ground.” Does the trio try a little too hard? Maybe a little. Do we care? Not at all.

The band’s origin story and image are all well and good, but the band’s ferocious and unrelenting music packs a punch too, and lives up to the precedent set by how the band markets themselves. As far as punk rock goes, the band’s music definitely sits on the skatepark-ready side of things. If there was ever a Tony Hawk’s Pro Skater game in which Tony was skating around, doing Japan Airs and Indy Nosebones all over a PrideFest, The Latter Day Skanks would definitely be who’s playing in the background. The band’s simplicity and instantaneous accessibility definitely makes them a pretty effective punk outfit, but they make it clear they have more chops than just your average punk band whose guitarist just picked up an electric guitar a week ago, throwing some pretty impressive solos into songs like the infectious and unforgettable “White Boys Make the Best Lovers.” The band is also known in the Portland scene for their energetic and wholly unique live shows, in which they encourage those in attendance to, “leave your morals, inhibitions and virginity at the door.”

Those looking to get down to some raw, punchy punk with lyrical themes that manage to be both funny and inspirational, sign up today for the Church of Latter Day Skanks, and join us as “Faithful Swallowers.”