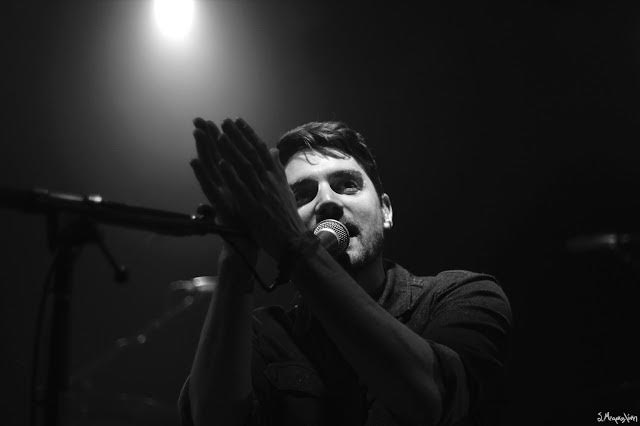 It’s always a treat when you have two great bands playing on the same stage in one night. I like Hey Rosetta! a lot and when I heard they were bringing Yukon Blonde with them as special guests I knew it was going to be even better. I made sure I arrived early enough to catch Yukon Blonde’s set at the Crocodile and have time to drink a PBR. They came on about 9:15 and started with high energy that made the crowd dance along.

The Vancouver-based band released their 5th studio album “On Blonde” earlier this year and have been touring extensively around the world since. Their sound reminds me of arriving to an 80s party that I don’t want to leave from. Their first track from their latest, “Saturday Night”, is a great catchy tune that you just want to sing and dance around to. Throughout the show, Jeff Innes and Brandon Scott were jumping around, moving back and forth across the stage, and having the time of their lives. Fun band that’s worth checking out if you haven’t already. Their tracks “Como”, “Make You Mine”, “Stairway”, “I Wanna Be Your Man”, are some of my favorites.

I saw both bands actually as part of Pemberton Music Festival in 2014 and I remember Hey Rosetta! surprising me with their set while there. I was glad they came back and that I got to see them again with the added bonus of Yukon Blonde. They took the stage a little after 10:30, with Tim Baker sitting at the piano. What really caught my attention from the first time I heard them live was the fact that they have combined violin, cello, brass, and piano to the more traditional indie setup. It gives the music such a rounded sound that stands out from what you expect to see on stage. Plus, who can really go wrong with the violin and cello?

The Canadian band started in 2005, celebrating their 10 years together now with a really cool poster that I found at the merch table. They have released 4 studio albums, last one being “Second Sight”, which the set leaned more towards. Incorporating all these different instruments always makes me feel as they are writing a movie score so carefully orchestrated.
The sound just flows so well and Tim’s voice is soothing and carries the right amount of angst. Some of my favorites include “Soft Offering”, “Red Heart”, “Dream”, “Kintsukuroi”, “Yer Spring”, “Carry Me Home”, “Dream”, “Young Glass”, “Harriet”, and “Alcatraz”. It was worth staying up on a weekday to catch these bands it was a great night for my ears. Oh, and Tim looks good on camera.

Posted by S.Barkalakis on Saturday, 7 November 2015