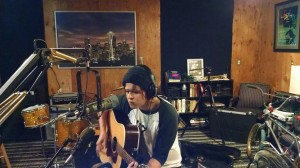 Babak Govan, aka Secret Arcade, is a Portland-transplanted fiction author and synthpop musician who’s having a bit of a come-up as of late with the release of his debut full-length album Quarter Century, which was released independently late last month. Strongly influenced by some of the darker and moodier names in classic new wave (Depeche Mode, The Cure), as well as some of the more nostalgic names in indie-electronic music (CHVRCHES, M83), Secret Arcade comes through with a strong and personable debut album, and to help support the album’s release, Govan recently released a new music video for one of the lead singles off the album, “Suspect.”

The music video for “Suspect” is a looker, with very creative uses of out-of-focus shots and bizarre lighting, giving the video a delectably hallucinatory vibe. In between shots of Govan performing on an M-Audio keyboard, the video follows a simple cat-and-mouse plot involving an older gentlemen running from a masked figure, all capping off with a surprising twist ending. The surreal tone of the music video perfectly compliments the music, which, while being ostensibly cheery, features heart-wrenching and personal lyrics from Govan.

Watch the music video for “Suspect” below, and be sure to check out the other songs from Quarter Century. You can stream and/or purchase it at http://secretarcade.bandcamp.com/album/quarter-century.