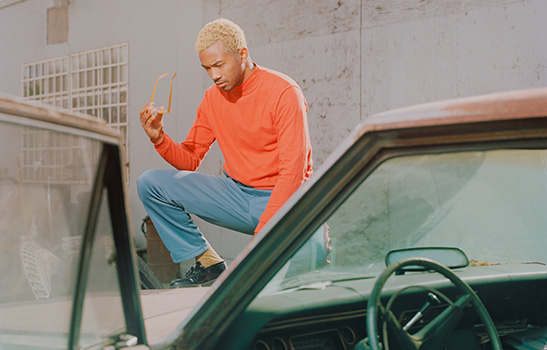 Born and raised in Columbia, South Carolina, Chaz Bear (formerly Bundick) has been actively involved in music going back to his early teenage years playing in punk and indie rock bands. Bear unveiled his Toro y Moi guise in 2001, in which he began incorporating electronics and channeling a wider swath of stylistic influences — from indie rock and ’60s baroque pop to ’80s R&B, French house, and underground hip-hop — into his own solo music. By the time he graduated from the University of South Carolina in 2009 with a BA in graphic design, Bear had refined Toro y Moi into a truly unique, captivating project, with numerous music magazines and blogs touting his hazy recordings as the sound of summer. His Carpark-released debut album, Causers of This, would follow in early 2010 and garnered high praise in many publications including NME and Pitchfork.

With each subsequent record, Bear revealed himself to be as prolific as diverse. From the space-age funk of 2011’s Underneath the Pine to the introspective, house-tinged pop and soul of 2013’s Anything in Return, to the ’70s radio gold influences percolating throughout 2015’s What For?, Bear consistently steered Toro y Moi in new directions while never sacrificing his melodic sensibility or keen ear for arrangements and texture. Although his most recent excursions — last year’s stunning concert film/album, Live from Trona (featuring an expanded line-up of Toro y Moi’s touring group performing in the California desert), and his Star Stuff collaboration with jazz duo the Mattson 2 (just released in late March on Carpark sister label Company Records, which Bear runs) — were full-band affairs, his latest Toro y Moi album is a much more personal outing.

Tickets to Toro Y Moi’s forthcoming performance at the Neptune Theatre on January 19th can be purchased here.