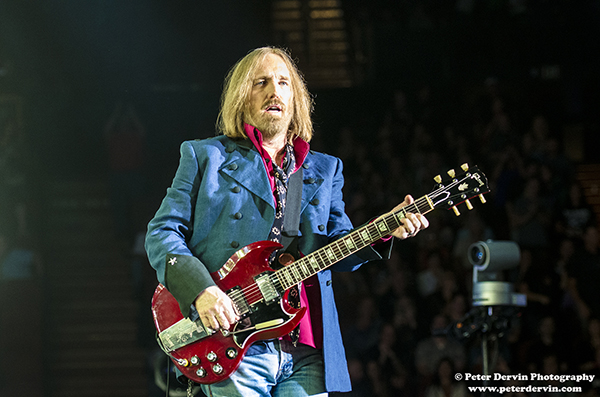 Earlier this year I was able to photograph and review Tom Petty & The Heartbreakers with Steve Winwood performing at The Gorge in George, Washington. This was at the beginning of their “Hypnotic Eye” Summer Tour across the United States and Canada. This evening’s performance was the night before the last night to wrap it up for 2014 playing to their adopted hometown in Los Angeles.

Personally, this was a homecoming for me too. The first concert I saw at The Fabulous Forum was KISS in 1976. In this old building I’ve seen Paul McCartney and Wings, Queen, Jethro Tull, Peter Gabriel, Fleetwood Mac, Prince & the Revolution, DEVO, The Police and many more. The folks at Madison Square Garden acquired the Fabulous Forum and they renovated and updated the grand concert venue. It is now dedicated to live music performances and WOW, it sure was impressive.

Steve Winwood opened the sold out show, playing “I’m A Man”, “Them Changes” and “Can’t Find My Way Back Home”. Steve Winwood in his own right is one of Rock ‘n’ Roll’s true legends. Inducted into the Rock and Roll Hall of Fame with his band Traffic, he began his career with the Spencer Davis Group and formed Blind Faith with Eric Clapton and Ginger Baker.

Tom Petty & The Heartbreakers opened their set  just as they had at The Gorge, with a rousing rockin’ version of the Byrds “So You Wanna Be A Rock ‘n’ Roll Star”. With the opening notes, the crowd jumped for joy and the magical ride began.

They played a variety of classic hits and new songs from their “Hypnotic Eye” album. Once again, hearing the crowd sing “Learning To Fly” gives you the chills as its one of those moments where everyone is united in song.

Inducted into the Rock and Roll Hall of Fame in 2002, Tom Petty & The Heartbreakers continues to be one of the best live bands anywhere. For me, being able to photograph these guys is truly special. Guitar master  Mike Campbell gave me a quick smile several times as I shot away. I gave him a mutual smile and nod of appreciation as we both rocked out. Pretty cool I must say.

My photo gallery can be found HERE