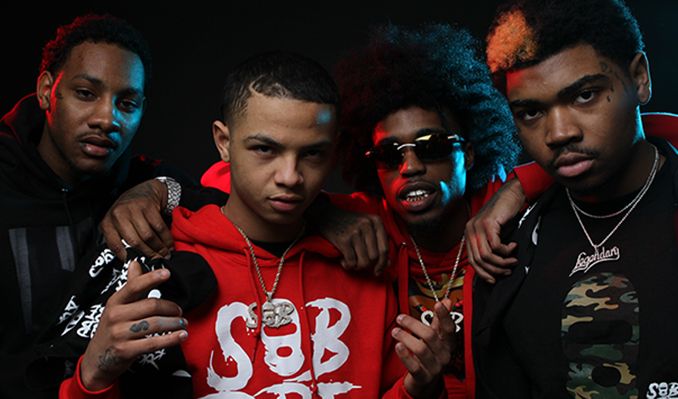 SOB X RBE is the biggest thing to come out of Vallejo since Mac Dre and, like the late Bay Area pioneer, the group makes rap songs that capture both the exuberant energy and gritty foundation of their Northern California soil. The four-man group comes from a small city with a rich rap history and, over the last two years, they’ve built on the groundwork that was laid before them, taking their homegrown sound to new heights.

As teenagers, Yhung T.O, DaBoii, Slimmy B, and Lul G bonded over their love of basketball and the fashion that surrounds it, trading shoes back and forth between them. Later in high school, when they each had aspirations of rap stardom, they formed a musical brotherhood, uniting T.O’s Real Boi Entertainment with Slimmy B, Daboii, and Lul G’s Strictly Only Brothers to establish the collective. Their 2016 tracks “Different” and “Anti,” recorded in the basement at T.O’s grandmother’s house, quickly became Bay Area anthems, catapulting the group into regional celebrity.

In the past year, SOB X RBE has reached far beyond the Bay Area’s borders. After racking up millions of views on their music videos, they brought their high-energy hits on the road, selling out shows up and down the West Coast before embarking on a nationwide tour. Last February, they landed a spot on the Black Panther soundtrack with “Paramedic!,” a scorching banger that adds a layer of polish while maintaining their rough edges, followed by the release of their debut album Gangin. On the project, the group raps about how far they’ve come, how far they still have to go, and, above all, their loyalty to each other.

Tickets to SOB X RBE’s forthcoming performance at The Showbox can be purchased here.