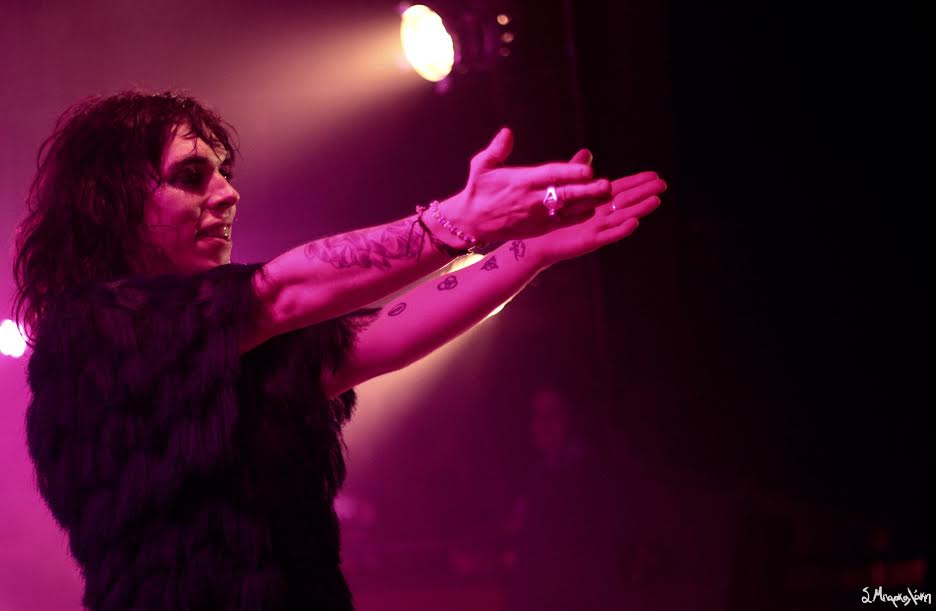 Before walking into the Crocodile tonight I didn’t know much about The Struts besides a few songs and that they were British.  I had heard that their live shows are wildly amusing and I was really curious to see for myself.  The band took the stage shortly after 9:30 and from the beginning you knew they were going to be a riot.  Each band member walked out separately with a drink shouted at the audience and lead singer Luke Spiller took the stage, running back and forth and exciting the crowd.  I don’t believe there was a moment that he lost anyone in the place during the performance, he didn’t ask for your attention, he demanded it.

You could tell that the band is very heavily influenced by classic rock bands like the Rolling Stones, Queen and Led Zeppelin.  Truth is that many bands are, the unique factor is that this one has a way of incorporating all the great things from them but still crafting their own modern sound and image.  You are getting everything you can expect to see at a good rock show, screaming, long hair, British accents, drinking, wardrobe changes, singing along, singer walking through crowd, and certainly no voice in the morning.

Even though the band formed in 2010 by Spiller and guitarist Adam Slack, it feels like they have been around much longer than that.  Their first album Everybody Wants came out in July 2014, but the band has released a couple of EPs before and since.

along the way.  Cool fact is that the band actually opened for the Rolling Stones in Paris last year, which exposed them to a larger audience and Spiller has had the honor of being dressed by Zandra Rhodes, who worked with Freddie Mercury in the past. He does take his role as the next rock and roll star pretty serious and has done his homework right.  He is constantly interacting with the crowd, joking around, demonstrating his vocal capabilities, and most of all, showing us a good unforgettable time.

During the middle of the show, he asked if the people wanted him to come down into the pit and without any delays he showed the desired path with his hands and the crowd parted in the middle. He jumped down, walked a few steps, smiling at everyone, then went on to have a sing along with each side guiding the words.  It was very entertaining to watch and some people were completely into it, the way it should always be at a live show.  He changed outfits 3 or 4 times throughout the show and he was a complete rock star performing, full of charisma, confidence, and charm, without missing a beat.

The band fits very well with each other and the guys seem to be having a blast on stage.  Drummer Gethin Davies had a chance to showcase his talent during the encore while bassist Jed Elliott and Slack followed along to close out with “Where Did She Go”.  During their performance of “Kiss This”, a bra was thrown on stage that had the title written on it, so who knows if someone came prepared or if that was part of the show.  This is going to be a band to watch closely, as I see it sticking around in the years to come.  They are magnetic and Spiller has the talent to send them to space.

Posted by S.Barkalakis on Thursday, 12 November 2015