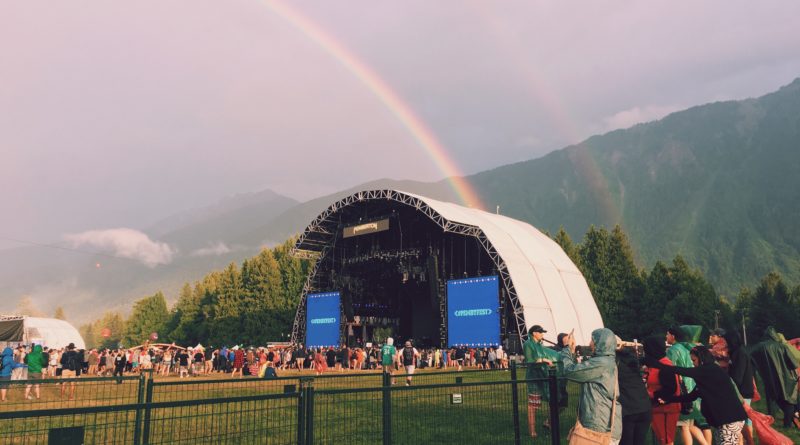 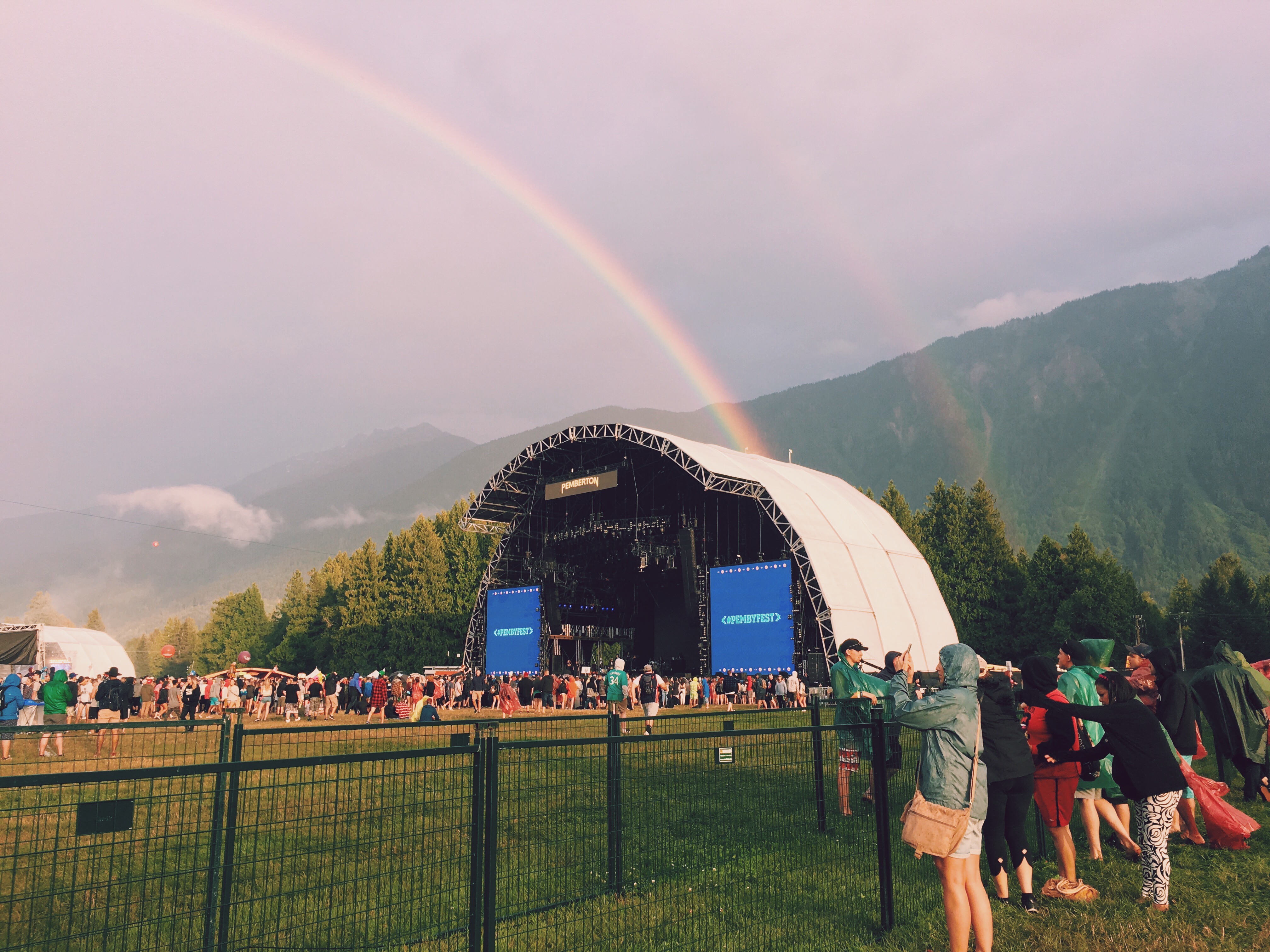 Pemberton Music Festival was one of the most beautiful venues I’ve experienced for a festival, on par with The Gorge in Washington. The drive up on the Sea to Sky highway is unreal, winding up through the mountains with the ocean below you. The venue itself is surrounded by tall white-capped mountains.

In my opinion, the festival lineup was one of the best and biggest in the region this year. However, such a good lineup draws a large amount of people. I read that the festival this year had approximately 45,000 people daily, more than ever before. This is 15,000 people more than when the Gorge is sold out. The venue itself seemed big enough to hold that many people, but all the long lines for literally everything got old very quickly. Water lines, bathroom lines, food lines, general store lines, shower lines, entry lines, exit lines. I’ve been to my share of festivals, so I’m used to lines for these kinds of things, but these were much longer and more disorganized lines. For the sake of the attendees, I think they should have stopped selling tickets long before 45,000.

Due to schedule conflicts and stopping in the Whistler Village for a few drinks, my group and I didn’t arrive to the festival until late Wednesday night/Thursday morning. For general north camping, the parking was 8 kilometers away from the camping, so the festival provided school buses to move the people from the parking at a nearby rodeo to the venue. I’m not sure where campers parked in previous years, but I was told this was a new set up. In theory, this sounds like a feasible plan, however, they needed a lot more school buses. All camping was sold out and by the time we got there around midnight, there was still a massive line for the shuttles. I think the people at the front of the line said they had been waiting for over four hours for a shuttle. I understand that farther parking and shuttle was the only solution for such a high volume of people, but I think they need more buses next year.

On Thursday, the most noteworthy shows for me were Snoop Dogg and Purity Ring (I attempted to make it in time for Keys N Krates but didn’t realize how long the security line would take). 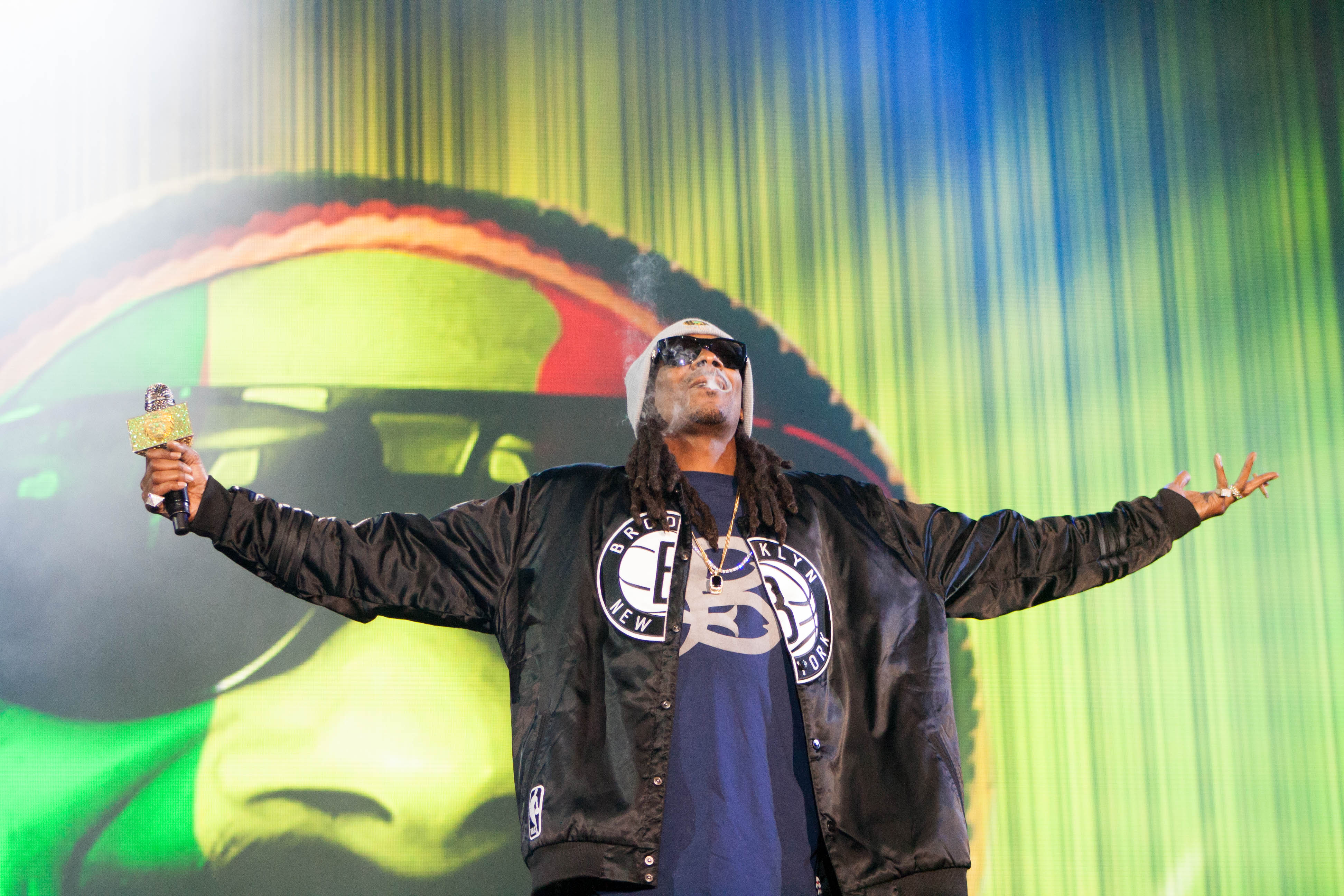 Snoop emerged from backstage with a bedazzled microphone in one hand and a blunt in the other. He kicked off the show with “The Next Episode,” which gave the crowd a crazy energy shot. Doggystyle is my favorite album of his, and luckily he played a fair amount of songs from that album. I’ve never been to a Snoop Dogg concert, but I imagine he probably had a bit more energy when he was younger. However, I still enjoyed the show. I do think he could’ve ended the show stronger, but he chose to close with his verse from Katy Perry’s “California Girls” and “Young, Wild, & Free.”

Purity Ring put on a great performance, as usual. Their show had less attendance than I would’ve expected, but we easily moved up front with lots of room. The lead singer, Megan James, always amazes me with her voice. She has such a high but soothing voice, and she sounds just like she does on the studio albums. The majority of the songs they played were from their new album, Another Eternity, but they still played their older hits like “Fineshrine” and “Obedear.”

Hudson Mohawke kicked off the day for me. (I skipped Hippie Sabotage after their What the Festival scene.) I’ve never seen HudMo before, and was not disappointed. He mostly played some of his earlier dubstep tracks, some that got him first recognized in the EDM world, along with his newer hits like “Chimes.” I had heard that he doesn’t play much of his older, harder dubstep anymore, so was glad that he was willing to for Pemberton. 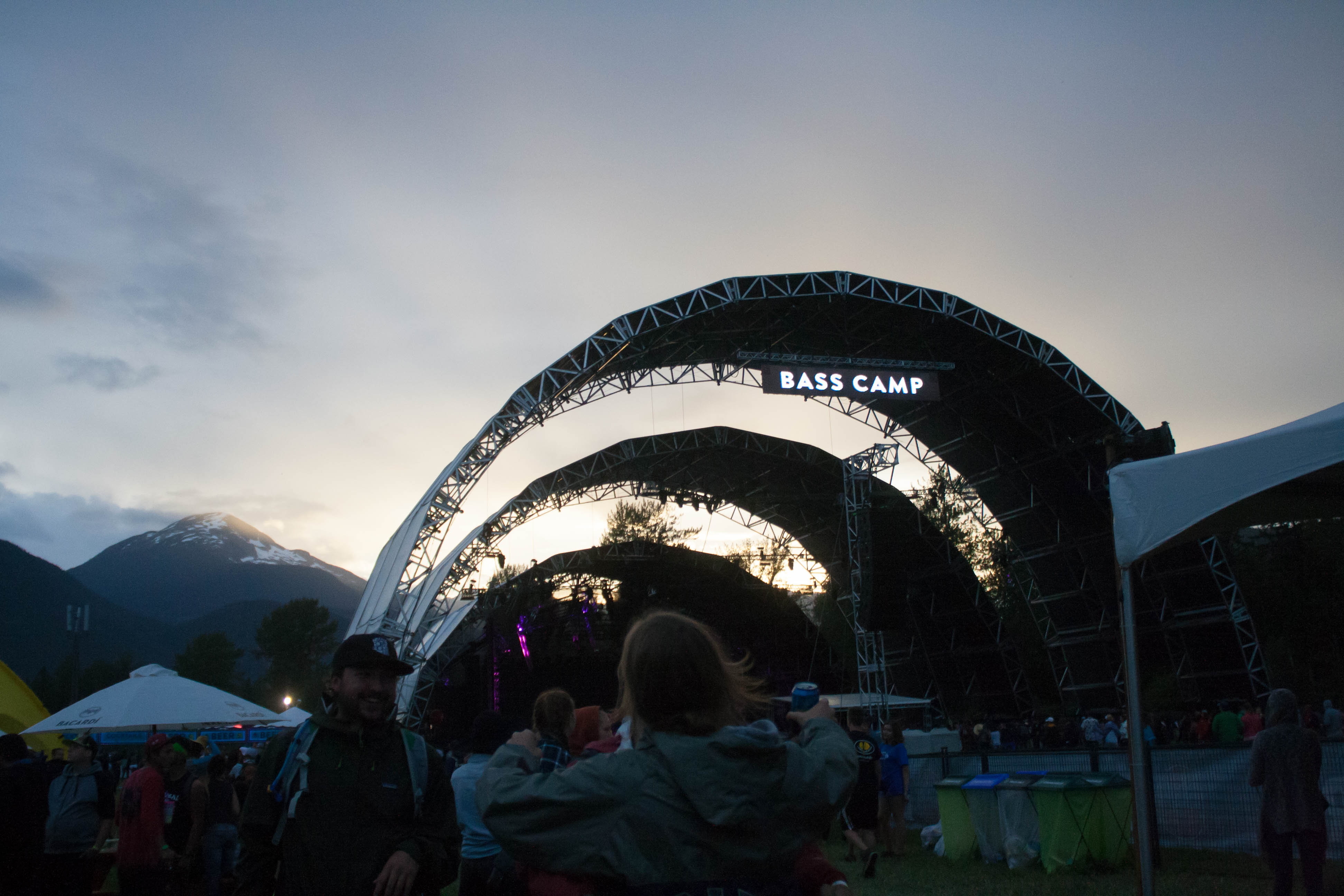 Cold War Kids was a great show to sit down and listen to. I didn’t expect to know many of the songs they were going to play, since I mostly only know their old album Robbers & Cowards from 2007. However, I was pleasantly surprised when they played several songs from that album. The crowd all sang along for their biggest songs like “First” and “Miracle Mile.” The band sounded phenomenal live, and the lead singer’s unique voice sounds just like on the records.

I haven’t listened to much of J. Cole, but have always respected the music he makes. Seeing him live was a treat. I’ve found that the more newer rap shows I go to today, the less the artists actually rap along with the music – they will mostly join in for the chorus and rap a few lines here and there when they can catch their breath. However, J. Cole did a great job of actually rapping all his lyrics and keeping the crowd moving and entertained.

Big Gigantic is always a fantastic show. I have a lot of respect for artists that put their heart and soul into their performance, and Big Gigantic is one such artist. He passionately plays the saxophone while mixing alongside his drummer. The two just jam like crazy on stage to their funky, jazzy electronic music while the crowd gets down. He (and Griz) always surprise me with their lung capacity and ability to play the sax with such energy for the duration of the set. They played some of their new hits like “Good Times Roll,” but also played some throwbacks that first gained them recognition in the beginning of their career, like their remixes of “Get ‘Em High” and “I Need a Dollar.”

Saturday’s big shows for me were Hucci, Ice Cube, The Killers, and Die Antwoord. Børns would have been a great show to see, but I had just seen him at Sasquatch!, and needed to do some regrouping back at the campsite during his show that evening. I do remember his show being very fun and lively from Sasquatch though – if you have the chance, catch his set live. 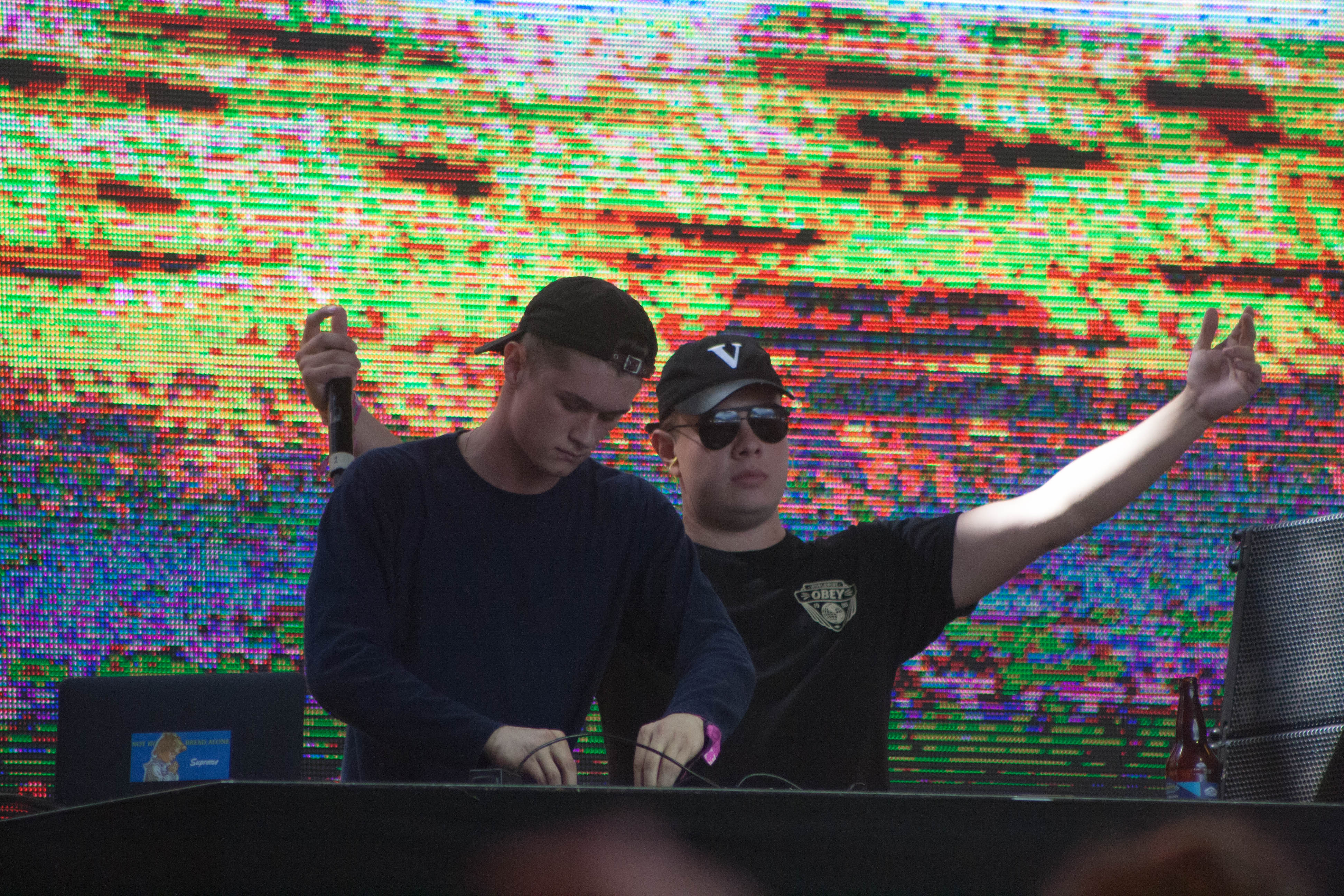 Hucci is a British trap producer who is making a big splash in the EDM scene, and who just recently performed at Paradiso. This was the first time I’d seen him, and had no idea how young he was. He had a lively set, and played some bangers with some of his own songs mixed in. We were lucky enough to catch him a second time that day at a more intimate show at the Perrier tent – a glass tent structure hosted by Perrier that served drinks and hosted different artists throughout the weekend. It was cool to see him work with a smaller crowd, as he was willing to reach out and give high fives since there was no barrier, and even asked people what they wanted to hear.

Ice Cube has not aged at all, and he has the same energy he did when he was in N.W.A (and even played “Fuck the Police,” one of N.W.A’s biggest hits). It felt unreal to be so close to such an iconic figure in rap history. For a 47-year-old, he was still able to jump around the whole show while rapping along to all of his lyrics – it was very impressive. He played all his big hits and the crowed all rapped along. Knowing that this would probably be my only chance to see Ice Cube, I’m glad I went. If the opportunity comes your way, go see him.

The Killers immediately followed Ice Cube and was hands down the best show of the weekend for me. The Killers was always a band I listened to growing up and seeing them was like a childhood dream come true. They sounded amazing and had a great energy. The festival planners made it so there were no conflicting shows at the same time, so literally everyone was at the show. Every once in a while, the screens on the side of the stage would zoom out to show to an aerial view of the crowd, and I’ve never seen so many people at one show (remember that The Gorge sold out is 30,000 people; imagine roughly 45,000 people all at the same show). Singing along to songs I grew up to with the biggest crowd I’ve ever been in was an unforgettable feeling. Without a doubt, best show of the weekend for me.

I was able to catch about twenty or thirty minutes of Die Antwoord after the encore of The Killers. Die Antwoord is definitely an acquired taste – they seem to make it a point to be as strange and vulgar as possible, but I’ve always thought their music is fun. I was able to see them perform a few years ago at Sasquatch!, and didn’t want to miss another chance to see them. They’re definitely an entertaining performance act. This time, they seemed to be mixing more electronic music into their sets, instead of just playing their original songs like the last time I had seen them. It got the crowd moving a lot more, but they seemed to be more into their originals. If you’re willing, I would recommend seeing these guys if you have a chance. It’s weird stuff, but they are definitely fun, entertaining performers. 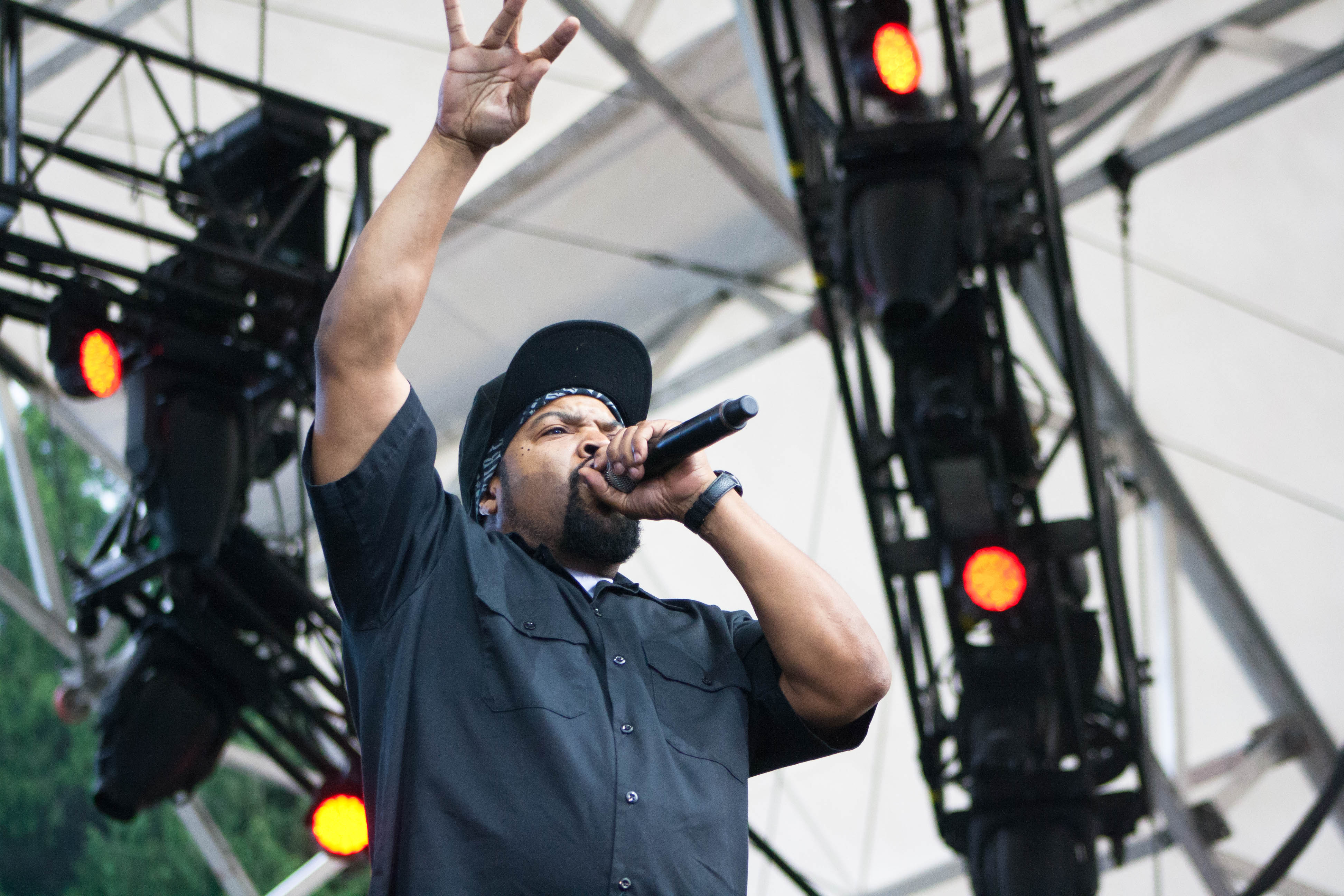 The best Sunday shows for me were Vince Staples and Baauer. I’m sure Pearl Jam was a great show, but I decided to get a head start and left the festival early after DJ Snake that night.

Vince Staples was an energetic and talented performer – it was hard to take pictures of him because he was moving and jumping around so much. He does a great job of rapping along to all of his lyrics, and his energy on stage was definitely reciprocated by the crowd. Everyone was rapping along to his big hits like “Norf Norf” and “Blue Suede.”

Baauer is always a blast. He is a trap and bass producer and DJ that has been a main artist in the EDM world since around 2012. He played a ton of bangers to get the crowd going along with some of his bigger hits like “Higher,” “Dum Dum” (which he sneakily transitioned into “Dum Dum Dum” by Keys N Krates and made the crowd go wild), and “Harlem Shake.” If you ever need to get moving, listen to some of his music.

Overall, the weekend was a blast, the music was fantastic, and the views were beautiful. I only hope next year they find a little more organization and add the necessary facilities and security/check-in for such a large number of people. Regardless, with such killer lineups, you’ll find me back at this festival next year.

Anna Kerr has always been into a wide variety of music and loves going to concerts and festivals. She is currently studying photography at WWU in Bellingham, but grew up in Spokane. She hopes to pursue a photojournalism career, covering stories on things that bring people to life, and things that she believes needs to seen.