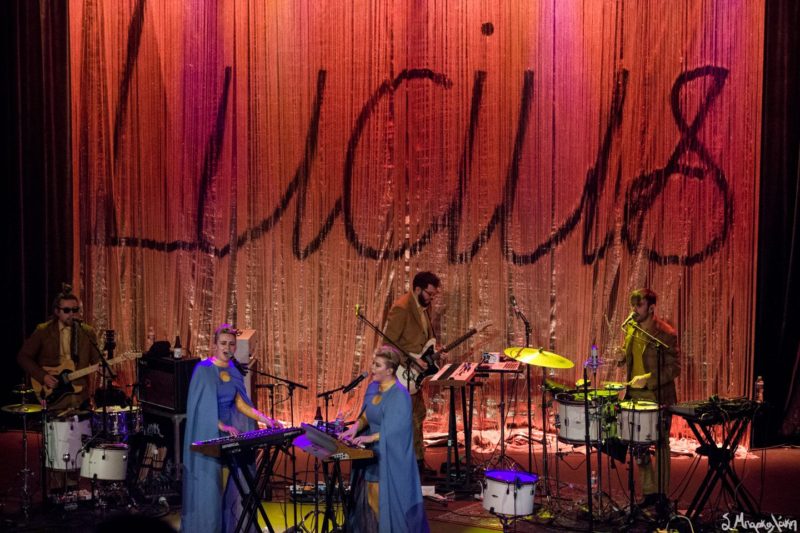 The much-anticipated sophomore album by Lucius, Good Grief, was released earlier this year, and it was finally time to see them perform live. The Neptune Theatre was filled to the max, and I couldn’t wait to experience their show for the first time. Jess Wolfe and Holly Laessig write and sing all of the songs for the five-piece band, which includes Dan Molad (drums), Peter Lalish (guitar), and Andrew Burri (guitar and drums). I have also enjoyed their contributions with other bands, including The Rentals, and my very favorite, San Fermin.

The stage was set up with a keyboard and synth for the ladies in the front-middle while in the back there were the guitars and standing drums to the right. A big Lucius curtain was hanging as the background behind the setup. The band took the stage around 9:15 starting their set with “Madness,” “Tempest,” and “Nothing Ordinary,” showcasing their perfect harmonies and vocal range. It’s as if you’re getting pulled into another space and time, completely mesmerized by the power of their voices, which demand your absolute attention.

Wolfe and Laessig are dressed the same in blue and gold outfits matching even the same hairstyle while the men are also dressed similar in brown tone suits. They thanked the excited crowd, and told us that they always feel at home in Seattle, as everyone is always so nice to them. After 5 songs, they moved to the right of the stage and sang “Dusty Trails” and “Born Again Teen” from a shared microphone. Then they moved to the left side of the stage and sang “Gone Insane” and “Turn It Around” before departing to change wardrobes while the band played on.

As the band started “Almighty Gosh,” we all looked around waiting for them to come back to the stage, but once the signing started we had to look around for them. The ladies were now singing from the middle of the floor by the 21+ area in their new gold-focused clothes. As the song progressed they walked through the middle, singing, jumping around with the audience, and made their way back to the stage. It was one of the coolest moments of the night.

Once they made their way back onstage, they sat down in front of the audience with guitarist Andrew Burri and sang an acoustic version of “Two of Us on the Run.” Another amazing moment was during “Go Home,” when the crowd was singing along so loud that the girls turned their microphones towards them for the second verse, and the whole venue filled with one voice. Their last song before the encore was “Better Look Back.”

They came back out and shared that they really like to cover the next song, which was Presley’s “Can’t Help Falling In Love,” which they completely nailed. They finished off the night with “How Loud Your Heart Gets” and “Genevieve,” leaving the people wanting more from this intriguing live band. I had no idea I was going to walk out after wondering what just happened at the sold-out Neptune. This band is probably the best thing I’ve seen the last few months, which truly makes me think they are the best thing that around most people are not aware of. Powerful vocals, amazing tunes, and the perfect balance between the two lead singers.