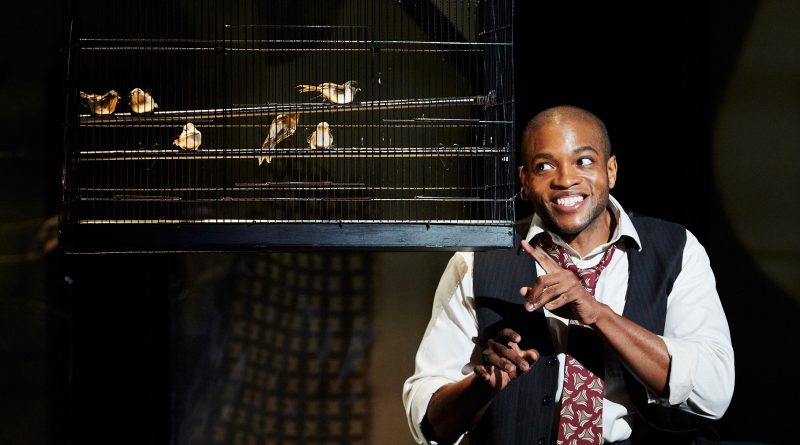 Charlie Parker’s Yardbird is an evocative look at the life of the legendary jazz musician, as seen from the perspective of those who were closest to him. His mother. His wives. Fellow musician Dizzy Gillespie. The framing device is that his life’s journey is presented as a series of flashbacks in the immediate moments after his death. It’s a dreamlike look at a life of accomplishment.

If it seems odd to set Charlie Parker’s story in a classical music setting, it’s not as far-fetched as it might seem. Parker had a keen interest in classical music, particularly the work of Igor Stravinsky, and his two Charlie Parker with Strings albums attempted to put a bit of classical polish on his music. In the program notes, the opera’s composer, Daniel Schnyder, explains that his intention in his work was to bridge the two worlds of classical and jazz, creating a classical music score that “has many jazz elements.” So it’s a piece that’s solidly rooted in the classical aesthetic, though it’s “jazz infused,” as the New York Times put it, and very modern sounding (the libretto is by Bridgette A. Wimberly).

But it’s important to note that this is a work about Parker’s life — not his music. If you’re a Parker aficionado, you’ll recognize the occasional riff drawn from his melodies (there’s a little Miles Davis in there too). But if you’re not that familiar with his work, you won’t get much sense of the man’s music, nor why he’s considered so important in jazz history. That’s something of a disappointment.

It’s still an eloquent depiction of Parker’s life and times. Joshua Stewart, as Parker, uses his strong tenor to give full voice to Parker’s passion and pain. In trying to find a balance between work and family, music always won out for Parker, and that’s reflected in the songs. Those dealing with relationships are often more fraught or downcast (such as his mother’s song, “Addie’s Blues”), while the numbers celebrating his music are upbeat. “Bebop’s Gonna Change the World,” for example, sung with Gillespie (played with charming confidence by Jorell Williams), is positively breezy. (Note that Stewart alternates the role with Frederick Ballentine).

But the show’s most powerful moments come in sequences that touch on personal and political struggles. In “Charlie’s Angel,” Parker movingly asks his wife, “If there is a God, why does the Negro suffer? Is my music lesser, smaller in God’s eye?” For all his acclaim, Parker still faced the discrimination inherent in being a black man in America. And his struggles with substance abuse (a serious accident in his youth led to his becoming addicted to heroin) led to his being committed to a hospital. In the opera, his confinement is illustrated by having Parker, tied in a straight-jacket, stand on a chair, trapped, unable to move or help himself. Adding poignancy to the sequence, a fellow inmate (Mikhail Calliste) expresses his unhappiness in a melancholy dance around Parker and the other troubled souls, trapped on their own chairs.

The voices throughout are excellent, in particular Angela Brown as Parker’s indomitable mother, Addie, and Shelly Traverse as Chan, one of Parker’s three wives. Toward the end, the women come together to have their say in an excellent ensemble number, “Farewell.” But it’s Parker who gets the last word, with “I Know Why the Caged Bird Sings.” This is a line from Paul Laurence Dunbar’s well-known poem “Sympathy” (also used as the title of one of Maya Angelou’s autobiographies). But there’s more hope in this song than in Dunbar’s poem. Despite Parker’s life coming to an end all too soon at age 34, Charlie Parker’s Yardbird is a testament to how Parker was able to overcome obstacles and escape that cage. And then this Bird began to soar.