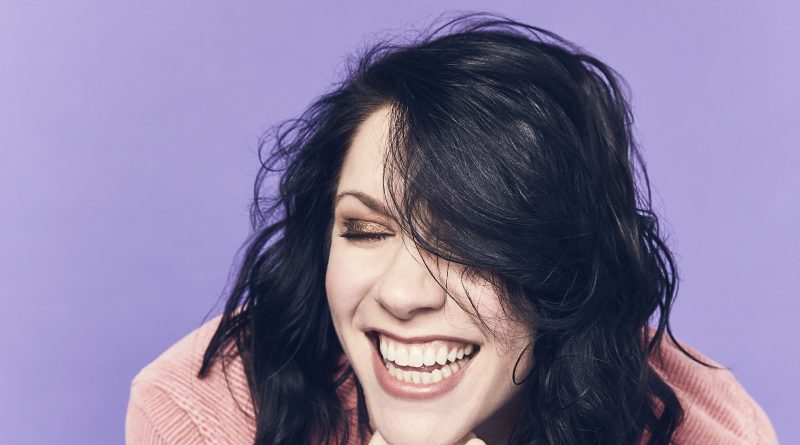 We had a chance to chat with Kristine Flaherty AKA K.Flay about her new album, Solutions, her upcoming tour, her new “microcast”, and life on the road. She takes the stage at Showbox SoDo on September 11th and we can’t wait to see her performance.

NWMS: Where am I finding you?

K.Flay: You’re finding me in a very strange corner of a large rehearsal complex in Los Angeles. I actually look like I’m in an interrogation room, that’s the energy of it but that is where I’m specifically at right now.

NWMS: So, you’re getting ready for the upcoming tour?

K.Flay: Yes, we’re in rehearsals and today is the day that things are really starting to come together, which is really exciting when all the moving parts begin to unite. This is far and away the best show I’ve put on and I’ve been working hard to make this one, stage production wise, go to the next level in progression. I’m very excited to be out there.

NWMS: How is it different from your previous tour that we saw you at last year?

K.Flay: I don’t want to spoil anything yet! In terms of the band formation we’re back to a three piece on stage. There is a lot of power in a trio and I think especially during our last tour I grew as a front person in a lot of ways. Our lighting is a bit different from the last tour which we brought more LED walls and displayed more video which was great but this is a different look, physically elevated (literally), stage setup. Again for me this was a different effort because I had some time to write the album and think visually how to express it, and the stage setup and lighting design is a reflection of that.

NWMS: Since we’re talking about the new record, was there a specific theme while writing it?

K.Flay: The theme for me was sort of the writing principal as I worked on it which was to take, normally for a lot of people, or songwriters the genesis of a song is the point of pain or sadness, you know, the negative. The task I gave myself with this record was, okay I’ll start with that feeling but with every song I’m going to try to pivot in a direction of hopefulness or searching for answers and solutions. That was really how each song came about, the feel of the record is a kind of cautious but relentless optimism and for me that was something I needed in my life as an individual human.

NWMS: That is exactly how I felt when I listened to the songs, you have such a way of communicating those emotions to your audience through your music, it’s amazing.

K.Flay: That is awesome and great to hear.

NWMS: Tell me more about this “microcast” you launched, what brought that up?

K.Flay: It’s funny because the opportunity came up unexpectedly. I’m a huge fan of produced audio and as a touring musician I spend a lot of time in cars, planes, and buses, so I consume a lot of that sort of content. People knew that about me and this opportunity came up to create an audio show designed and produced for micro speakers, (Amazon and Google Home), and I was excited to do it as I like to try things that have not been tried before. The concept for the show that’s called, What Am I Doing Here? That seems to be a question that I’ve been asking myself in my adult life and as a musician. Like “Hey I am in a porta potty in St.Petersburg Russia? What am I doing here?” What’s cool about touring and having the opportunity to travel and go to really exciting places is you get a lot of insight on how people live and how cool the world can be.

NWMS: You got a lot of buzz after the success of “Blood In The Cut,” what was the feeling after getting Grammy Nominated?

K.Flay: It’s a great feeling anytime something that you do resonates with people because there is so much content in the world that it’s hard for anything to stick or stand out. It was validating in a lot of ways especially because I was really bummed out when I wrote that song and it felt a little less lonely when other people were connecting to it thinking, “Yeah, I know what that’s like.” It’s always nice to get official recognition as well but I wouldn’t say it’s had any real effect on my personal life. It’s one lego piece in the lego world that I’m building. I’ve had the same friends and people around me for years so it doesn’t feel like much has changed, in a very beautiful way it feels like my life is sort of indifferent to the success. The good things I will happily accept with a smile and the bad things I will happily endure with the support of those same people.

NWMS: Let’s talk about the beginning, were you brought up musically or did you pick up an instrument in a random time in your life?

K.Flay: I grew up like most people in a house where music was played and present on stereo. My dad, I have two, one biological and one who adopted me from an early age, so my biological dad was a hobbyist guitar player and he taught me when I was in fifth grade. I played some guitar but I wasn’t in a band, or performed on stage, or did anything of the sort. It wasn’t until I was in college and I was in an argument with somebody about music that I wrote my first song. It was fun to do even though it started as messing around at first. From there I just started to learn how to make beats and music, how to record myself, to play shows on campus and I kind of somersaulted my way here.

NWMS: What do you like the most about touring?

K.Flay: I think there is two things that I like about touring; the first is that you get this tremendous and unparalleled adrenaline experience and cathartic experience. Being on stage and playing music is such a great feeling and it’s hard to explain to people who are not interested in doing it or get nervous on stage, but it really is though. If you can bare the anxiety of it, it’s a wonderful feeling. You’re connected to people in this unique circumstance and everything makes sense.

The other part I love about it is that I really like to travel and I like to see different places and understand the local culture as much as I can. It’s the best way to see the world because we get to do what local people get to do every day. Get coffee, get drinks, walk around, go to a show, it’s nice.

NWMS: It’s so true, you immerse yourselves in the city because you’re working there so it’s a different feeling than visiting.

K.Flay: It’s almost the opposite of being a tourist. It’s interesting when you break it down because when you visit a place you go to the sites, you have a hotel, it’s different from what you’re used to. As a touring musician you’re on a bus so you have to get off the bus, walk around and immediately you are a part of the city.

NWMS: What do you like the least about touring?

K.Flay: I think the thing that is hard about touring is missing people. It’s hard to be away from people and places that matter to you and anyone can relate to that feeling. Being away from friends, being away from family and missing things, that is a very hard thing. I’m missing many of the big things, like even this year there is a chance that I’ll miss the birth of my first nephew that I would like to be there for. On the flip side though, my schedule is so weird that end up seeing the people I love more than the average person because of how the timing works.