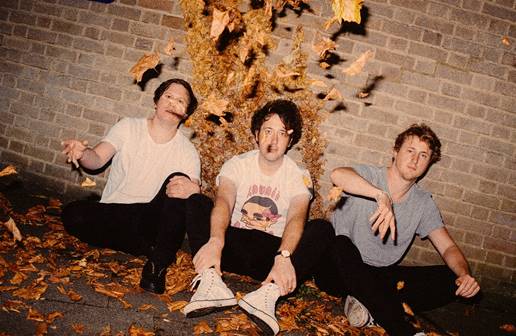 English rock band The Wombats are returning to Seattle on January 31 for a show at the Showbox. Their US tour kicked off in early January supporting their upcoming album, Beautiful People Will Ruin Your Life. The new album finds The Wombats pushing the boundaries of alt-pop innovation with a lush, ultramodern indie soundscape wrapped in Blade Runner synths, future grooves, celestial solos and space age melodies. After a few busy months headlining their own shows they will be joining the summer tour along the Pixies and Weezer. We recently had a chance to chat with bassist Tord Øverland Knudsen.

NWMS: Where am I catching you Tord?

Tord: We just arrived at the venue at Carrboro, North Carolina.

NWMS: Tell me a little about the tour you guys just started earlier this month.

Tord: We started with a few days rehearsing the new material before our first show in DC and it’s been going great so far, it’s nice to be back on the road. It takes about a week or so to get back in the swing of things and it now feels like a well-oiled machine working again.

NWMS: It looks like you have a busy year planned, is your new record still going to be released on February 9th?

Tord: The 9th is still the date and we’re really excited to have everybody hear the whole thing. We’ve released two songs at the moment and another one is coming out this week. It’s nice to get to play the new material live and see people’s reactions and everyone seems to be liking it so far. People seem to be learning the lyrics and that’s a cool feeling that is very rewarding as well.

NWMS: At the moment are you just playing the two songs released or more?

Tord: We’re also playing a couple of other songs too one called “Black Flamingo,” and another called “Cheetah Tongue.”

NWMS: It looks like you guys wrote this record in different parts of the world, how did that dynamic work?

Tord: We’re kind of spread out, I live in Oslo at the moment, where I just had a baby with my partner. Dan (Haggis) lives in London, and Murph (Matthew Murphy) lives in Los Angeles. We did some of the writing in LA, some in New York, and eventually we all just met in Oslo and that’s where we reworked some of the material and wrote some new songs. The finalizing of the writing was done in Oslo and then we recorded the whole album in London in a studio there.

NWMS: Well, congrats on the baby!

Tord: Thanks, it’s been a bit of a mental change for me.

NWMS: I was just going to ask about it since you brought it up, how has that changed your life with what you do for a living?

Tord: We are trying to fit in some time off in between dates so we’re not doing a long stretch like three months non-stop. I wanted to make sure we got a week off in between the different legs to get some time home. At the moment it all seems to be working out alright but of course it’s difficult to plan. I love doing this and at the end of the day it’s my job so it will be okay with some planning.

NWMS: Tell me a little about the beginning of the band, how did the three of you connect?

Tord: We met in Liverpool, all of us local lads, Murph and Dan knew each other from before and shortly after moving there for University I met them. We were in music college there and it was within the first week of living there that we started playing together, fourteen years ago now.

NWMS: How did you choose the name of the band?

Tord: We needed to put a band name on a poster and we didn’t have one at the moment and Dan kind of made the decision for us when the promoter asked. We thought we were going to change it but it never happened.

NWMS: Tell me about your early influences, did you come from a musical background how did you start?

Tord: I come from a family where music was very important, my dad is a music professor and he was always playing different instruments around me when I was growing up. I started playing cello when I was six years of age, and was a little more focused on classical music. When I got to eleven or twelve I got into more punk and rock music like Weezer, Greenday, and Offspring, where cello wasn’t really good for playing those songs. I thought it would be cool to play something else so I chose bass in school for a project, and that was it.

NWMS: What should fans be expecting on this new tour when you come to the Showbox?

Tord: I like to think that as a band we constantly evolve, and I believe we’ve always been a live band first, as it’s all about the energy we bring to our performances. It’s very important to get that energy level from the crowd and create a nice atmosphere. We like to bring the party through each town, and I feel like the more experience we have the better it gets.

NWMS: What is your favorite hobby outside of music?

Tord: I really like fishing and growing up in Norway it was a big part of my life. It’s a great thing to do and I still like to find the time to get out there and do it.