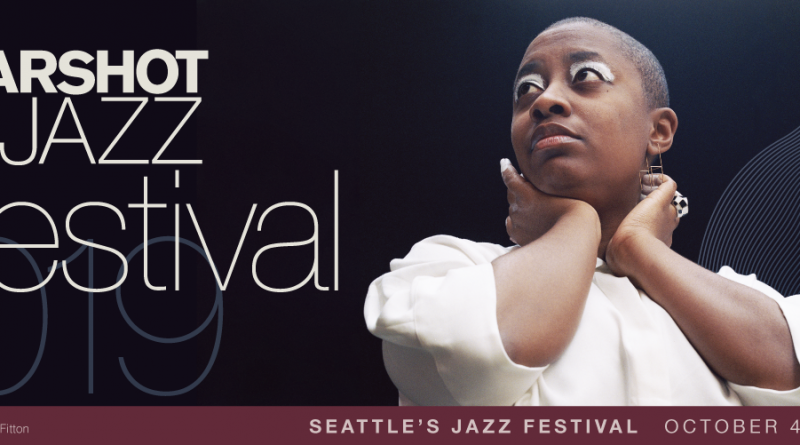 The Annual Earshot Jazz Festival is always one of the biggest, and richest, music festivals around town.  John Gilbreath, long Earshot’s Executive Director, was kind enough to walk me through this year’s feast which takes place October 4 – November 6.

NWMS:  How many years is this for Earshot?  How long have you been in charge of it, and what were your earlier duties?

John Gilbreath:  This is the 31st year of the Earshot Jazz Festival, though the organization was formed in 1984. I came around as a volunteer in 1990, the second year of the festival, and the music was so crazy and so wonderful that I fell in love. I became volunteer coordinator in 1991 and came into the organization when the Executive Director position opened up in 1992. For a few years, I was the only paid employee, working for ten dollars an hour. We’ve grown since then.

NWMS:  How did you go about assembling this year’s calendar?  Whom did you consult about which acts to include?

John Gilbreath:  Man, there are so many circumstances that come together to make one of these festivals. Each concert has a story. There are local, regional and international initiatives at work. We’re often anchoring, or participating in, tours by important established and emerging artists. Essentially, I see the music scene of this city to be on a par with New York; if not in practice then at least in potential. Especially with regard to jazz; there is no reason why Seattle can’t support the cultural traditions and artistic edge that are routine in New York City.

NWMS:  Which are the most prominent of the returning acts?  How does each of them sound?

John Gilbreath:  Jazz is an expanding universe; in all directions at all times. It is absolutely grounded in rich tradition, but it is way beyond an evolutionary point where it just has one sound. Over the years we made informal commitments to many artists, often being the first Seattle presenter to present remarkable younger artists.

That was the case with Robert Glasper, Vijay Iyer, Jason Moran, Ambrose Akinmusire and others. That is certainly the case with the young Chicago vibes player Joel Ross, who at just 23 has a major Blue Note records release. We first invited his group to the festival when he was 19. And we love to present artists who came up in Seattle and have established themselves in the New York scene, like drummer/rapper Kassa Overall, the brass quartet The Westerlies, pianist Carmen Staaf, and saxophonist Briggan Krauss; all of whom appear this year.

NWMS:  Which are the most prominent of the acts new this year?  What do they sound like?

John Gilbreath:  Vocalist Cécile McLorin Salvant is an absolutely remarkable young artist. Nate Chenin called her a “stealth subversive” in his new book Playing Changes: Jazz for the New Century, because of her clear connections to jazz tradition, and her absolute joy in free-falling, no-net creativity.

Chucho Valdés has been so closely connected to the proliferation of Cuban music in the US, that he has been the official “Cultural Ambassador” of the Cuban government. His band for this year’s concert features the traditional Batá drums that connect Cuban spiritual expression with the Yoruba culture of West Africa.

And a solo concert by the reclusive Brazilian genius, Egberto Gismonti. Sublime piano and guitar. One of only three US dates.

NWMS:  Which locals acts made it into Earshot?  What can we expect from them?

John Gilbreath:  There are many. Typically, at least 50% of the participating artists are resident artists. This year, we’re launching two Seattle Jazz Showcases within the festival, encouraging general audiences, and a specific initiative inviting programming professionals from regional music venues and performing arts centers to attend.

We’re really excited to present another series at Langston that includes the Seattle hip-hop project, Knife Knights of Ishmael Butler, Eric Blood, and OC Notes. Two other Langston concerts will focus on the jazz legacy of the Central District; the Folks Project of D’Vonne Lewis, Darrius Willrich and Evan Flory-Barnes; and a fascinating project spoken word and music project of veteran saxophonist Gary Hammon called, “In Case You Didn’t Know.”

We’re also doing a benefit concert for the storied jazz programs at Washington Middle School and Garfield High School, in support of equity and inclusion initiatives at both schools, and the long-standing jazz pipeline between them. This year will see over 200 homeless students between the two schools. Washington Middle Schools wants to make a musical instrument available to every 6th grader entering the school.

NWMS:  What are most difficult logistics of the Festival, and how do you work through them?

John Gilbreath:  We’re a small nonprofit organization, with only 5 massively dedicated employees, and many great volunteers. At festival time it’s all-hands-on-deck, with most of us working 30 consecutive 16-hour days. That, and the fact that ticket sales support less than half of the cost of the series. We have to raise fresh money every year.

John Gilbreath:  There are so many. I’m really looking forward to a couple of hits with the Haitian artist Val Jeanty, also known as Val_INC. She’ll be in a trio with drummer Terri Lyne Carrington and pianist Kris Davis on Oct 4, and back on October 12 with Ravish Momin in Afro-Electronics: Turning Jewels Into Water. It’s always a treat when drummer Allison Miller comes back, especially with violinist Jenny Scheinman and their Parlour Games quartet, appearing October 24, with long-ago Garfield grad Carmen Staaf on piano.

NWMS:  What’s in the future for Earshot, after the Festival?

John Gilbreath:  A couple of days of recovery, that’s for sure, then hitting it hard to serve this incredible Seattle jazz community, and prepare for our annual magnum-opus concert of Duke Ellington’s Sacred Music on December 28. It’s the longest running continuous production of this music in the world.