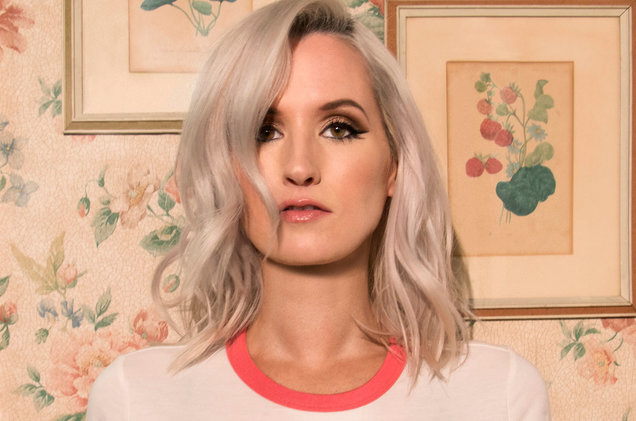 Always athirst for new inspirations, singer-songwriter Ingrid Michaelson leaned into the “Stranger Things” TV show, which inspired her new album Stranger Songs.  She drops in on The Showbox on Saturday, October 12th.  She was kind enough to take some stranger questions.

NWMS:  What are your best, worst, and most unusual stories from playing around the world?

Ingrid Michaelson:  One of the best memories I have of performing was when I was in New York City playing in a small club and people started singing one of my songs back to me. But it never happened before. I couldn’t even finish the song, I was so happy.

We played in Singapore and were told that we couldn’t chew gum. I remember being very anxious about forgetting and putting gum in my mouth! So I was afraid the audience would be really uptight. But they ended up being very sweet.

NWMS: What were your first impressions of “Stranger Things”? How did your views on the show grow and change as you watched and thought?

Ingrid Michaelson:  I’m really drawn to “Stranger Things” because of the nostalgic element. It makes me feel like a kid again. But the more I watched it, the more I realized the coming-of-age element.

NWMS:  What led you to do a concept album based on the show?

Ingrid Michaelson: I just wanted a new lens to push songs through. I needed new inspiration.

NWMS:  Did you base the songs more on specific incidents from the show, specific characters, and/or a more-amorphous feel?

Ingrid Michaelson:  All the songs of the perspectives of the characters. But also about things that have happened in my life. I was able to morph together those two elements.

NWMS: I was intrigued by “Freak Show,” which seemed to be inviting the listener into a larger social circle and into a more private, hiding from the world, at the same time.  What would you say were your major lyrical themes on this new album?

NWMS:  You’re using a lot of voice distortion on the new one.  Will this approach make the songs difficult to perform live?

Ingrid Michaelson: Now we have the technology to bring [that] on tour. And a lot of the harmony techniques that were used, we now can do live.

NWMS:  In recent years, you’ve lost your mother, your canine best friend, and your marriage.  How are these losses winding their way through your life and your work?

Ingrid Michaelson:  Life is hard. It’s a struggle. But it’s also such a gift. Everything I write has pieces of my loss in it.  That’s how I grieve.

Ingrid Michaelson:  Working on “The Notebook,” the musical adaptation for Broadway! Also writing all the original music for a movie musical.  And a new Christmas single with a very special guest we can announce yet, but I’m so excited!