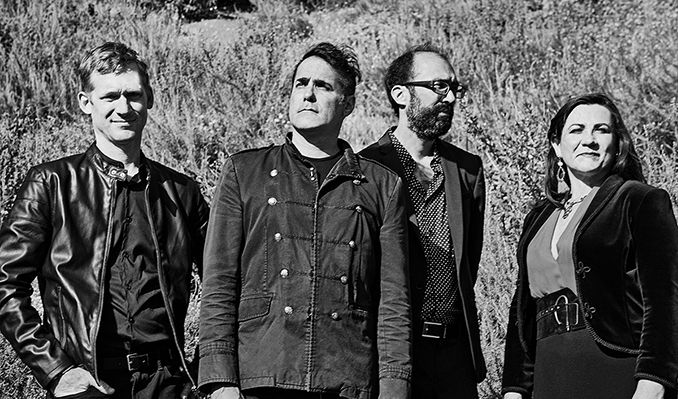 DeVotchKa to play The Showbox with Orkesta Mendoza on September 20

Every ticket for this show includes a digital download of DeVotchKa’s forthcoming album, This Night Falls Forever (available August 24). You will receive an email with instructions on how to redeem this offer approximately 7 days after your ticket purchase. US/Canadian residents only. Offer not valid on Resale tickets.

Following the band’s 2012 tour DeVotchKa frontman Nick Urata was left feeling conflicted. On one hand, his band was as popular as ever, playing their critically-acclaimed songs from over seven albums to fans at sold- out shows around the globe, and Urata was enjoying a burgeoning career as a film score composer, with a GRAMMY nomination already under his belt. But on the night of DeVotchKa’s final show of the tour, onstage in an enormous arena in Mexico, Urata belted out the first few lines only to discover his microphone powered off—a simple mistake, but one that would later cause him to reflect deeply on his stake in life.

“You try not to make a big deal out of it, but you don’t recover from that for the rest of the show,” Urata says, now smiling at the memory. “It happened more than once on that tour, I went into a bit of a tailspin after that. I wondered if the universe was trying to tell me something I didn’t want to hear. I was realizing how nearly anyone can sing, almost everybody has the ability, but if you want to perform for people, then you have to fight for it.”

Following the tour, the band—Urata (vocals, guitars, Theremin, trumpet, piano), Jeanie Schroder (acoustic bass, sousaphone), Shawn King (drums, percussion, trumpet), and Tom Hagerman (violin, viola, accordion, piano)—enjoyed a series of gigs at smaller venues. Urata spent those shows both reconnecting with his audience on a more intimate level and rediscovering his love for his craft. It was a necessary moment that inspired him to begin work on a new DeVotchKa album—a process that would take a lot longer than anyone anticipated, but that would prove essential.

“I realized the motivation is simply how much I love singing,” Urata says, “and I just want to keep this conversation going with people who have connected with our band. Those shows after the big tour were when things started to fall back into place, I could see that people were moved by the lyrics and singing them back to me. It is a rare and powerful thing to connect with people like this. It is the thing that keeps us going.”