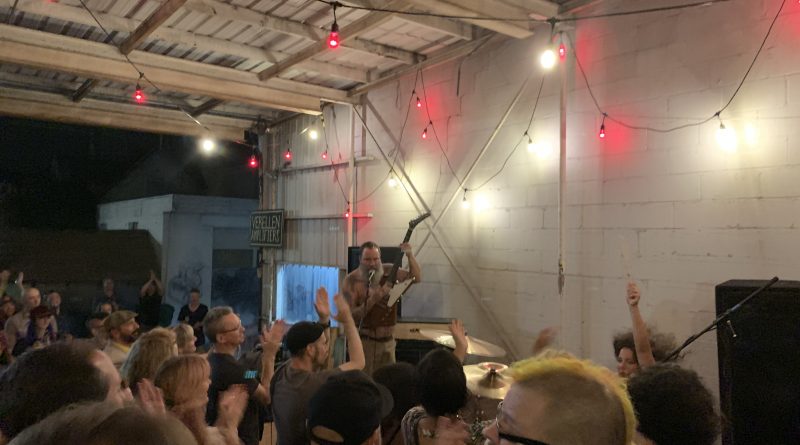 Tacos, a glorious food which can be had anytime, day or night. Tacos! The Band can also be something not only tasty but also insanely enjoyable! A bar – Literally called BAR HOUSE – turned into a metal ceremony, which had fans winding through the bar and its spaces; toward an opening to steps leading to deafening yet glorious metal. This evening was the record release of Tacos! The Band.

Tacos! Is a band which includes “Lupe Flores” and “Donovan Stewart” – two staples in the local heavy music scene. They have figured out if you combine two passions, you can create not just a sound but an experience which is both tasty and pleasing to the ears. Their – not bashful – loud sound is a great reprieve from the other forms of rock being played in the scene. Both “Lupe” and “Donovan” have a charisma on stage which is hard not to be a fan of — you cheer for them and you mosh for them. The setting for tonight’s show was an industrial style setting with assembly line equipment, faded wooden panels and a dirty parking lot which opened to the alley in the Fremont District – which felt like an event you would find in a more industrial part of the city (think more SODO District). As the show was churning along — every thunderous kick-drum, repeated syncopated banging of the snare-drums, and thrashing of heavy distorted guitar made the lights strung overhead quiver, made the wooden stairs in the back sway and made the concert goers mosh with even more furor. The mosh pit was an epic clash of bodies pushing off each other, which seemed to be non-stop during the entire set of Tacos!

The band graciously played loud and created a metal ceremony – celebrating the music, tacos and more heavy metal music! Metal may not be the first thing you think of when you think of the Seattle music scene, but it is more prevalent than you realize – it is underground, it is bubbling up to the surface of the local scene. Bands such as Tacos! Are preaching the gospel of metal and tacos – Rebel in their ferocity and celebrate with not just moshing and head banging…. But tacos and friends!!