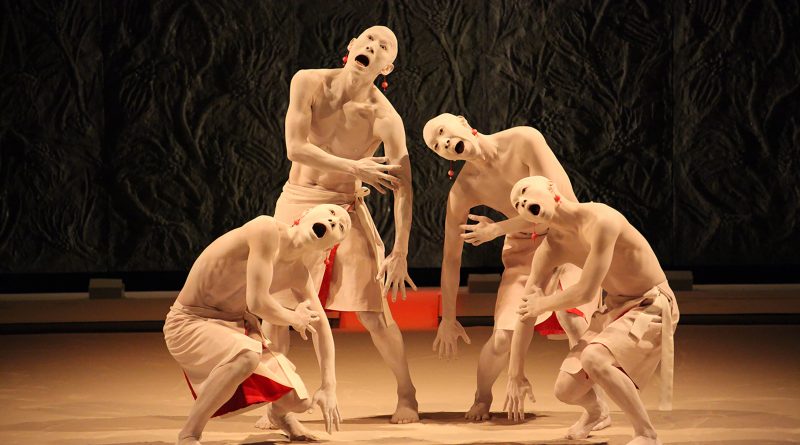 Japanese dance troupe Sankai Juku brought their 2015 piece Meguri: Teeming Sea, Tranquil Land to Seattle’s Meany Hall last weekend. The troupe’s co-founder and choreographer, Ushio Amagatsu, defines “Meguri” as referring to cyclical events, “such as the passage of time, the cycle of the four seasons and transitions the earth has been through.” And certainly this piece conveyed the feeling of moving through a world in transition, with a grace and a tension that ultimately becomes transcendent.

There’s a tragedy that forever links Sankai Juku and Seattle. The company chose Seattle for the first stop on their second U.S. tour in 1985. But during a free outside performance on September 10, which featured four members of the troupe lowered head first over the side of the Mutual Life Building in Pioneer Square, one of the ropes broke, and dancer Yoshiyuki Takada fell to his death. The tour was cancelled, and Amagatsu considered breaking up the troupe. But he eventually decided to continue, and the company’s next U.S. tour made a point of starting in the Pacific Northwest. “We cannot tell you how important it is for us to start our U.S. tour on a stage in Seattle — not anywhere else,” the company said in an open letter to the public that was released before the performance. As Amagatsu further explained to the UPI news agency, “It is important to direct one’s energy toward the future. By coming back to Seattle, it is as if time, which had been frozen, started to melt. We are happy to be here.” Thus was a bond forged that will never be broken.

Founded in 1975, the Sankai Juku is one of the world’s leading butoh dance companies. It’s no stretch to see butoh as being a kind of “punk rock” of the dance world. The style was developed in Japan specifically to challenge accepted standards of Western dance or traditional Japanese dance, a challenge implicit in its very name, which translates to “dance of darkness.”

Sankai Juku’s works have no obvious narrative, but there are strong, underlying themes, delving into the mysteries of birth and death. The stage was bare throughout Meguri, save for a large glass bowl hanging stage left; the floor was covered in sand, which made a whispering noise when the dancers moved quickly. The musical accompaniment, by Japanese composers Takashi Kako, YAS-KAZ, and Yoichiro Yoshikawa, was by turns meditative and quiet, bright and electronic, and majestically orchestral (a strong enough score that a CD was on sale in the lobby).

The dancers are neutral, everyman figures, with shaved heads, bodies dusted in rice flour, and nondescript wraps around their waists (and occasionally longer robes); this keeps your focus on the bodies and their movements. “The Call from the Distance,” the first of Meguri’s seven segments, featured a solitary dancer moving with imperceptible slowness from stage right to stage left, as if illustrating the passage of a lifetime. “Transformation on the Sea Bottom,” began with four dancers on their backs, gradually stretching out arms and legs like some type of sea anemone, before finally rising to their feet. The back wall, featuring images of crinoid (sea lily) fossils, added to the otherworldly atmosphere.

Overall, Merguri was more languid than previous works I’ve seen by the company. Many of the movements were smooth and graceful, though not without tension (think of what it’s like to walk under water; there’s a resistance). But there were less tranquil moments as well. As the dancers rose from sitting to standing positions, their faces were sometimes frozen in an open-mouthed, silent scream, capturing the pain of transition, the fear of the unknown. In one segment, aptly named “Premonition — Quietude — Tremblings,” the dancers’ calm was broken when they began violently shaking. In other sequences, they would leap into the air in unison, then fall sprawling to the ground — silently.

Sankai Juku’s extraordinary performances take you into another realm. The dancers, stripped to their bare essence, explore the agonies and the ecstasies of being human, and their striving to find a balance between the dark and the light is captivating. It’s an experience you emerge from feeling more fully alive.