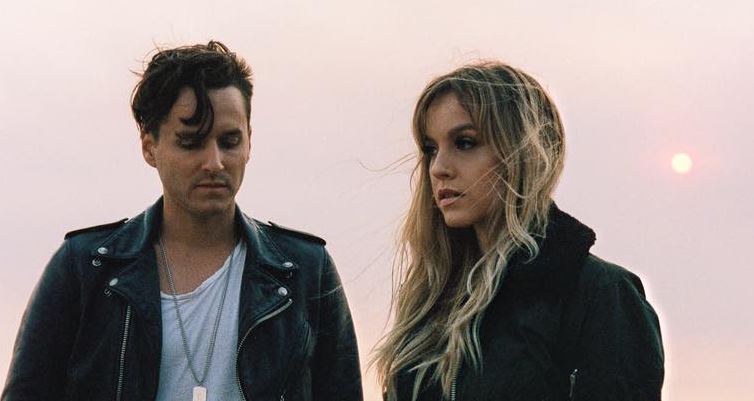 In preparation of their tour starting at the end of October with The Naked and the Famous, we had the chance to chat with rising stars XYLØ. Composed of siblings Paige and Chase Duddy, the duo discussed their beginning, musical influences, and becoming visible through the internet. Their debut track “America” was featured in an online PacSun commercial staring Kendall and Kylie Jenner and the new single “Dead End Love” is burning up the internet right now.

Chase: We’re in LA right now, we shot a video yesterday and had some writing sessions this week.
Paige: We’re just getting ready for the tour at the moment, we have a lot to get done with our live show starting soon. We are so busy with lighting , backtracks, stage production, rehearsals. We have a lot to prepare for in the next couple of weeks.

Is this your first official tour?

Chase: This will be the official US tour. We’ve done SXSW and had a few that lasted a week through the West Coast but nothing longer.

Tell me a little more about how this music duo started.

Paige: About three years ago, Chase asked me to work with him on an advert he was creating for PacSun, whom he had collaborated with in the past. He wanted me to add some vocals to a track, so we wrote a song together, which was my first time, and the chemistry was really good between us. The song came out and got a really good reaction on YouTube and other social media outlets, so we decided to do a few more adverts together. Then we decided to start a band together and continue with the project. In a way if it wasn’t for that PacSun commercial XYLØ wouldn’t exist. It’s crazy to think that a YouTube video changed our lives.

What were your musical influences growing up?

Paige: I’m ten years younger than Chase, so my musical history is a little different than Chases’. I wasn’t really involved with music until I started working with Chase three years ago. It was more of a hobby in the past but I never really took it seriously until the collaboration came up. After that I went to music school for a little bit so I could learn more about it since I became so interested.
Chase: We come from a family of musicians, our grandfather is a studio percussionist and jazz drummer. He founded a couple of music schools in L.A., one of  which Paige and I attended  and we are really close to him. I consider him my second father and I started playing drums as far back as I can remember. It stuck with me and it felt so natural to continue pursuing it. My mom’s brothers were musicians in a band called Toto [Their uncles are Joe, Mike and Steve Porcaro]. Then drumming in multiple bands developed into production and writing/composing songs with other artists for me.

Chase: In a way I’m sure I did because by the time Paige was a teenager I was already pursuing music living away from home in Hollywood.

What are you looking forward to the most on this tour?

Paige: For me I haven’t really seen many places in the US so probably seeing the country, going to Canada and playing for a whole bunch of people every night.
Chase: Meeting new fans and people, creating relationships with the other bands and going to Canada. Also visiting Nashville because we get to see our cousins that live there for Thanksgiving.

Are you working on a full length album?

Paige: Technically we are but there are no plans to release an album since we’re releasing singles but we’re aiming for something in the summer. The singles coming out sporadically is working for us at the moment, we actually have another coming out in less than a month.

The tour starts in Portland on October 26 at The Roseland, then they’ll be in Seattle the next day at The Neptune and the following day, October 28 at The Vogue in Vancouver, B.C.