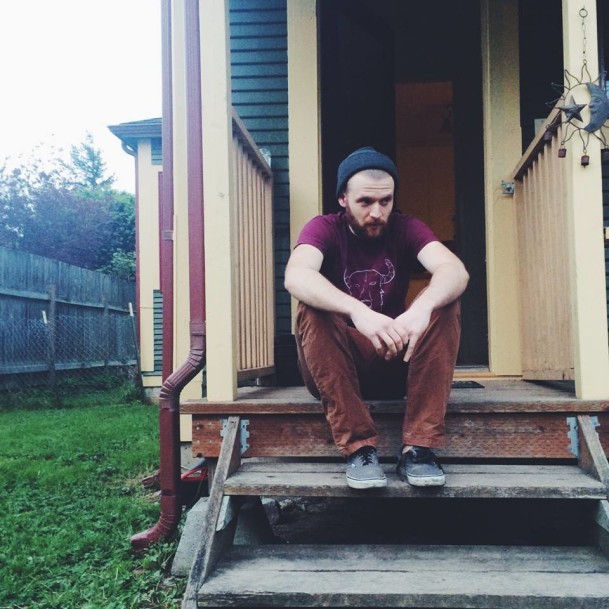 Solo bedroom singer-songwriter Hayden Eller, better known by his moniker The Co Founder, who you may remember as a featured artist in the 2015 50 Bands in 50 Days series, has been steadily gaining steam since the project’s inception in early 2012. With each warmly-received releases he puts forward, Eller gains more notoriety and acclaim in the fertile Bellingham music scene. Eller’s revealing and poetic lyricism is matched with humble, warm indie folk instrumentation. His full-length debut, Whiskey & 45’s, was a welcome standout in a somewhat saturated market, and promised a bright future for The Co Founder.

Recently, The Co Founder performed an in-studio concert on the The Drew and Mark Show on 101.9FM KVSH, the Voice of Vashon, and we’re excited to premiere to the world the full footage of this very intimate performance. This footage contains The Co Founder’s full four-song performance, as well as an interview with the hosts in medias res. The performance begins with two brand new songs never before seen on any Co Founder release.

Eller is currently in the middle of tracking his as of now untitled sophomore full-length album. The album was recorded with the assistance of Tye Hastings, a graduate of Western Washington’s Audio Engineering and recent intern at Bear Creak Studios, as well as Jake Barrow, best known for his work with The City Hall, Cassiopeia, and his electronic music project Vervex. Tye will be handling all the engineering, while Jake helped write and record all of the percussion.

The Co Founder is also heading out on a West Coast tour later this month, where he’ll be playing with myriad local favorites, among them the aforementioned City Hall, Candysound, Oso, and more. For a full list of tour dates, consult http://thecofoundermusic.com/shows.

Check out the in-studio concert video below.