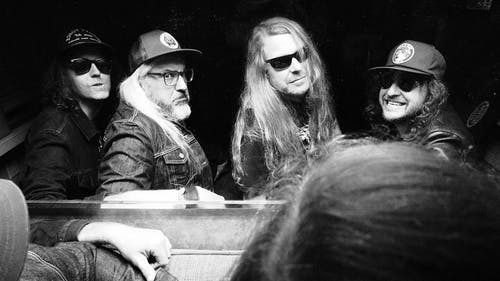 Witch coming to The Crocodile on October 21st

Witch was born from a marriage of apparently contradictory influences. J Mascis of Dinosaur Jr. renown and his long time friend Dave Sweetapple were interested in forming a hard rock band. They found willing and able conspirators in Kyle Thomas and Asa Irons, both members New England avant-folk outfit Feathers. On their eponymous debut album (released in 2006), this line-up mounts a mighty sonic tumult that harkens back to classic heavy metal sound of early 70’s outfits while still sounding modern in it’s assault. The sophomore follow up ‘Paralyzed’ was released in 2008 and saw a slight departure from the ‘Self Titled’ release, with similar themes but musically more aggressive in it’s approach. Three short years later they added Oakland shredder Graham Clise (Annihilation Time / Lecherous Gaze) on second guitar, rounding out the line up that still stands.

In Witch, Mascis returns to his first love, drums, playing with an unbridled passion that recalls his work with Deep Wound, his early 80’s hardcore band. Meanwhile, Kyle, who also records and tours as King Tuff, sings and writes the group’s supernatural-oriented lyrics, exploring the juxtapositions between age and youth, the paradox of meeting yourself, and the dilemma of falling asleep on a mountaintop and waking up a hundred years later. Graham weaves a dense texture of rhythm and lead guitar lines that ebb and flow over the basic monolithic, trundling riff-rock song structure. Dave adds additional weight to Witch’s sound with massive, crunching bass lines, not dissimilar to his work with horror metal band, Eerie and straight up rock band, Sweet Apple.