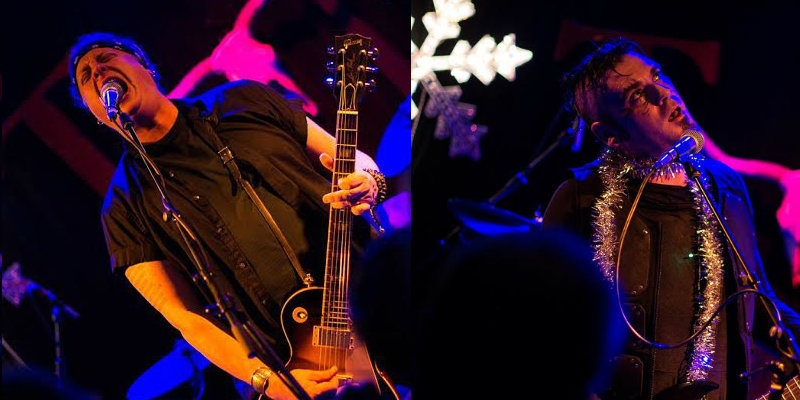 Earlier this month, KISW’s “overnight sensation”, Matt Koch, held a birthday party to end all birthday parties at The Tractor Tavern. Although not quite at the 50 years old milestone, the theme of the birthday party was still definitely black – as in black shirts, black pants, black shoes…you get the point. If this were a normal party, the nearly unanimous black attire would’ve stood out, but the bill was steeped in loud and local, heavy rock and roll so it naturally fit right in.

WOODSHED was the first to take the stage, playing many of their songs from their debut record, Hands In The Sky, released earlier this year. Although relatively new to the scene, WOODSHED is far more old school than new. The first things you notice about their sound is Nathan Reno’s growling bass and Jake Turner’s raunchy, fast drum fills. In fact, you couldn’t really see Jake at all behind his kit, comprised of as many cymbals as toms, but he used every one of them liberally during their set. Contrasted against the adrenalized, double-pedal bass drumming, Hunter Venturo held his own with steady and consistent vocals and guitar reminiscent of 70’s heavy metal. Solos were elongated, peppered with circular head banging and Nathan’s contortionist antics. This is a “must see” band who set a high bar for the night.

Year of the Cobra performed next. A two-piece stoner/doom band with mystically epic lyrics, YOTC did a good job of balancing haunting vocals with aggression-laden drums. Amy Barrysmith half sang, half chanted songs while delivering fuzzy bass chords with a rhythmic stage presence. Jon Barrysmith seemed to be in a world of his own, serving aggressive, pounding drums to a welcoming, nodding audience. When they were done, the crowd seemed winded and I wondered how they were able to make it through their set without having to retune the bass or breaking several drumsticks.

Third up was Devils Hunt Me Down who came to the event prepared. If you’ve never seen this band, think of a ferocious and wild, but smartly dressed, Nathaniel Rateliff impersonator who sings with a lot more intensity (Matthew Singleton Bentley, vocals/guitar) with a tight, unique and cohesive backline (Christopher Allen Bicknell on guitar, Callum James Michael Dickson on drums and Ian Kenneth Sides on bass). They were heavy but not too heavy, mixing in elements of psych-rock, bar rock and energetic power reverb. And, hey, you really should like any band that gets creative with a bass talkbox, 12-string electric guitars and a bugle with plunger mute.

Mother Crone is noticeably more about music than lyrics, leading off their set (and most of their songs) with extended, yet concise, intros that married Tool’s depression with Metallica’s testosterone. Self-described as doom/thrash metal, drummer Aaron O’Toole (who was subbing for full-time drummer Jeremy Shulz),  bassist/vox Joshua Hashman and guitar/vox Joseph Frothingham have found a way to blend rhythm with chaos while staying true to their heavy, thrasher roots. They were probably the hardest and loudest band of the night, which wasn’t easy to accomplish.

Ten Miles Wide preceded only the headliner and wasted no time grabbing the audience’s attention with a mix of prog/mainstream/concept rock. It’s worth noting that they were the first band of the night that the crowd sang along to, proving out a devoted fanbase. Johndus Beckman (vocals/guitar) commanded attention by wearing a Kevlar vest wrapped in Christmas tinsel and singing like a person who’s just lost their mind. Emotions seemed to range from fear to anger to confusion to denial. Will Andrews (drums) was noticeably advanced, driving each song with unpredictable and interesting beats and fills. Jake Carden (guitar) and Ryan Thornes (bass) completed the foursome, adding a bittersweet edge to their overall sound.

Headliner Windowpane really needs no review at this point in their career. They are probably the most accomplished active rock and roll band in the Pacific Northwest. Comprised of singer/guitarist Glenn Cannon, guitarist Tony Abreu, bassist Mark Harris and drummer Sean Morrison, Windowpane has seen and done it all, from independent distribution of several albums to opening last year’s White River Amphitheater’s Pain in the Grass festival to touring with the likes of Five Finger Death Punch and Queensryche. Even then, they’re probably being sold short. Likely as a personal favor to Matt Koch for his birthday, Windowpane not only played a packed bill in a small venue but delivered a full-bodied, extended set that was trashy at times and soulful at other times. Their songwriting is seasoned and honest while their music never loses the ability to turn an audience on their head. In appreciation, the worn out crowd demanded two encores, one of which featured Woodshed’s Hunter Venturo on vocals singing Black Sabbath’s War Pigs. Simply a great way to end the night.

It should be noted that Matt Koch is a rocker with an immense heart and an unconditional supporter of Seattle music. It should also be noted that he has immense stamina (holy bejesus), never leaving his front row spot except to briefly take the stage and humbly thank the audience for celebrating his birthday with him. Before it was all said and done, I asked Matt to summarize the event and his response was this: “Everything is now right with the world. 2016 sucked but that doesn’t matter. Tonight, THIS night, was LEGIT and I’m just happy to be here with my friends.” Agreed, Matt. Agreed.

Photos courtesy of Andy McHale. Check out more photos from this show and others HERE.