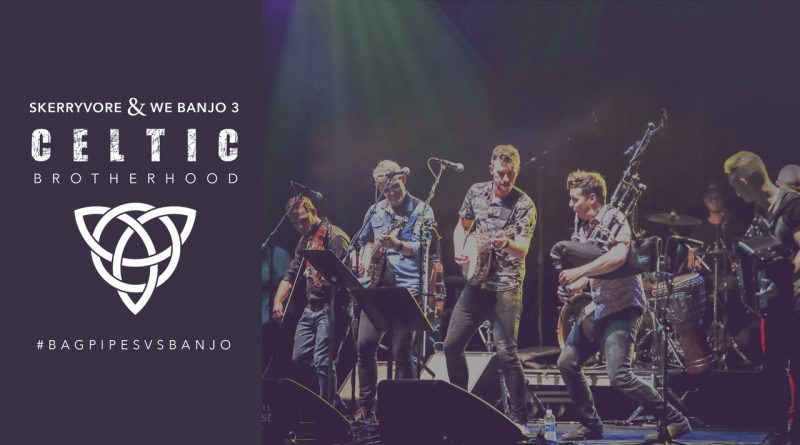 We Banjo 3 is one of the most prolific and exciting bands to emerge from Ireland in recent years. Featuring banjo, fiddle, mandolin, guitar, percussion and beautiful harmonies, We Banjo 3’s music is affectionately described as “Celtgrass.” The Galway-based quartet comprises two sets of brothers, Enda & Fergal Scahill and Martin & David Howley, who collectively hold over a dozen “All Ireland” titles.

We Banjo 3 released their fourth studio recording, Haven, on July 27, 2018, as the follow up to their highly-acclaimed 2016 release, String Theory, which went to # 1 on Billboard’s World Music Chart. We Banjo 3’s unique crossover of many genres of music is beautifully reflected on Haven; the 11 original compositions take the listener an exploratory, honest and uplifting musical journey. Haven reached # 1 on Billboard’s Bluegrass Chart the week of August 13th as well as making many other charts. The video for the single “Light In The Sky” premiered on CMT.com on August 30th and is still on their list of most trending videos.

Haven has received rave reviews including 4 STARS from Irish Times. AXS.com said, “Their blend of Celtic and bluegrass with dashes of folk-pop, and country is perfectly suited for the Americana scene. Their songs fall comfortably into The Lumineers style of earnest folk pop anthems.” Elmore Magazine said, “It’s as if Punch Brothers, Sam Bush, Jerry Douglas and The Chieftains all got together for a battle of the bands but decided to pool their resources instead. The future of world music is here.”

We Banjo 3 has developed a loyal following in the U.S., Ireland and other parts of the world, winning over audiences at major music and Irish festivals and prestigious venues with their joyous, engaging live show. In a review of this year’s ROMP festival, Semi-Bluegrass said, “Probably my favorite set of the week, and arguably the most engaging and entertaining was the get-on-your-feet CeltGrass performance of Ireland’s We Banjo 3. The band drew fans to the front of the stage like iron filings to a magnet and their energy and enthusiasm rippled through the crowd setting the stage for a great night of music. When they come around your neck of the woods, go see them…you owe it to yourself.”

Skerryvore creates a unique fusion of folk, rock and Americana that represents all the different personalities and upbringing of the eight band members from different regions of Scotland. They are two time winners of Scotland’s Traditional Music ‘Live Act of the Year’  Award (2016 & 2011).

They’ll be playing at Rialto Theater in Tacoma on October 12.

Northwest Music Scene and Broadway Center are giving you a chance to win tickets for this event.

To enter, use the hashtag #bagpipesvsbanjo in a tweet on Twitter. Three lucky winners will be randomly selected on October 10 at 12 p.m. and each will receive a pair of tickets to the show.

Of course like most things in life there are a few rules.

Must be 21+ to enter.
Tickets are non-transferable.
Contest ends at 12 p.m. on October 10, 2018. Winner will be notified via “tag” on Twitter.
Winner must respond to claim tickets by noon on October 11, 2018.
Contest is not affiliated with Twitter, Facebook, Instagram or any other social media site.
Winner will be selected at random from all eligible entries.

Get more info about the show HERE. If you’d just like to purchase tickets you can do that HERE.