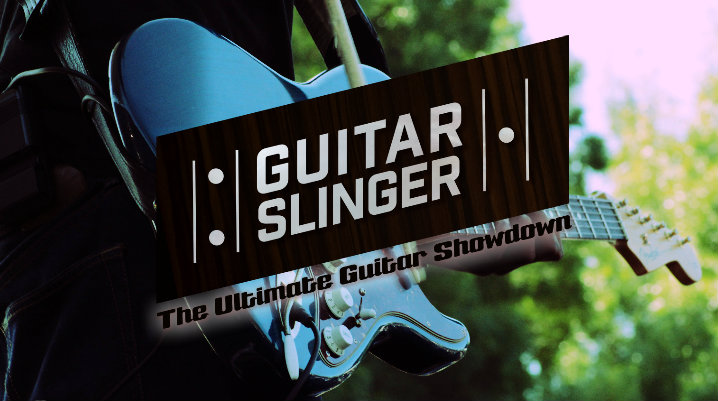 If you’ve spent much time at all on the NorthWest Music Scene over the last almost seven years, one thing that is pretty evident, is that even though we love all types of local music, we have a deep love for the guitar. Whether it is down-and-dirty blues, soul-soothing jazz licks, face-melting rock riffs or mind-blowing metal solos, there’s just something about the guitar that excites us, so when Upstream Music Fest announced the Guitar Slinger contest, we knew it was going to be good, especially since we attended their first big event, last year’s New Orleans Food & Funk Fest, and experienced firsthand the work they put into putting on a great show.

Presented by Upstream Music Fest + Summit, Guitar Slinger will give sixteen amateur guitar virtuosos ages 13 and up the chance to compete in front of a crowd and a panel of celebrity judges including Ayron Jones of Ayron Jones and The Way at MoPOP’s Sky Church. Slingers can submit to compete in four categories; acoustic, jazz, blues/slide, and rock/metal. Prizes include a slot to play on the main stage at Upstream Music Fest in May 2017, a scholarship to Crown Guitar Workshop, and $2,250 in prize money. The competition will be followed by a rocking show headlined by a surprise Northwest band.

“Guitar Slinger is part of the Upstream Presents umbrella, it’s a guitar competition and we have 4 categories that we’re looking for: acoustic, jazz, blues and slide, and rock and metal. So right now we’re taking submissions in each of those categories at our Guitar Slinger website which is guitarslingershowdown.com. People can go on there, click the link to submit, upload a video. We’ve had some great submissions rolling in and we listen to every one because it’s been really awesome to see. We’d love to have more though. We’ll have some guitar performances, like stunt type performances to go along with a whole night of entertainment so that it – I really think it’s going to be a fun event and we’re really looking forward to it.”

NWMS: Guitar Slinger is a step above the normal “Battle of the Bands”-type thing. We are huge guitar fans, so anything that has the word “guitar” in it, we’re probably going to be excited about it.

Vetting: Yeah, totally. And you know, it comes down from the top of our organization. Paul Allen is a talented guitar player and he loves anything guitar, and this is something he’s wanted to do for a long time. And now that we have the Upstream Presents kind of… umbrella that we can do these things, we think it’s going to be a really outstanding chance to showcase northwest guitar players and see them playing.

NWMS: This was Paul’s idea?

Vetting: Yeah, yeah it was. It’s something that he’s wanted to do for a little while. He’s been interested in guitar since a young age and it was one of his creative outlets throughout his life that he’s always been passionate about and he loves playing and watching great players play.

NWMS:  You have Ayron [Jones] listed as one of the judges; when will you be naming some of the other judges?

Vetting: We’ll probably announce those right around the time the submissions close, so about a week from now probably. And we’ll give you a heads up as to who those are. I think we’ve got some exciting, diverse people that are hopefully going to sign up to do it. They’re verbally committed at this point, but there are tour schedules and some things out there that could change at the last minute. So we’ve got some real good people in the hopper.

“We can do something with Guitar Slinger where we can hopefully find some of these unknown talents that are playing in basements, bars or blues and jazz clubs. Players you wouldn’t otherwise know about and give them a platform to show off what they can do, and bring in some of the local celebrity talents to amplify that message. We’re all a big Pacific Northwest industry family and we’ve got some really good things going on here. Things that everyone should know about.”

NWMS: How are the 16 contestants chosen?

Vetting: We have a group here at Upstream of passionate music programming assistants. that play guitar and love guitar, so we’ll have a round table of folks from the Upstream ecosystem that will judge the submissions and we’ll get them chosen. This is something that we want to do every year. We’d like this to turn into an annual event, so hopefully those people that are selected will be encouraged to participate next year, and make this thing even more robust and exciting.

NWMS: What is the criteria? You mention these people that are on the panel that are going to select the 16. Is it going to be all technical type things, or is showmanship or something else part of the criteria?

NWMS: When does the submission period end?

Vetting: We are closing submissions on February 1.

NWMS: Have you had a lot of submissions so far?

Vetting:  We’ve had some great submissions rolling in. When we closed the Upstream band submissions, we had close to 1200, but we got a ton right there at the end. So we’re expecting that same flurry for Guitar Slinger. And when we talked to when they call for submissions at the end it really ramps up. So we’re excited to see that last wave of submissions. I think we’re going to get some really great ones. And we’ve already had some really impressive players who’ve submitted. It’s going to be a real entertaining evening.

Whether you shred, strum, slide or pluck, it’s time to submit your skills for the chance to win cash, scholarships and guitars at Guitar Slinger: The Ultimate Guitar Showdown, presented by Upstream Music Fest + Summit. Click HERE to Submit.