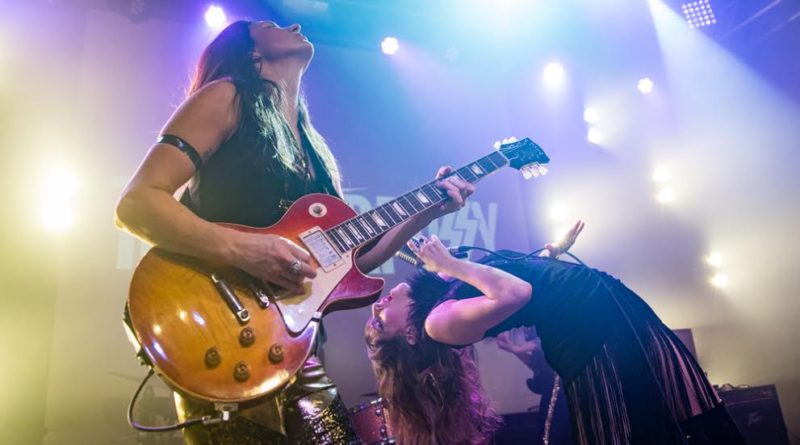 Billed as “a thunderous New Year’s Eve soiree,” Thunderpussy took over Neumos for the last two nights of the year – New Year’s Eve Eve for the all ages crowd and New Year’s Eve for the 21+ crowd. For the first show on December 30th, the lineup also included the Naked Giants and Wild Powwers. Although youngsters could attend, much of the crowd was of drinking age and could be found in the packed Moe Bar between sets, providing the venue with an overall New Year’s Eve feel.

This was the Naked Giants’ first, but long overdue, performance at Neumos. Grant Mullen (vox/guitar), Gianni Aiello (vox/bass) and Henry LaValee (drums) had a busy year recording, making a music video, performing in major concerts like Bumbershoot and KEXP’s Concerts at the Mural, touring the west coast with Car Seat Headrest and planning their February east coast tour with PWR BTTM. These guys are legit and making Seattle proud. They started off the night with a blast of energy, surprising the audience with newer material not found on their latest EP, R.I.P. that made waves in 2016.  Grant and Gianni shared vocals throughout their set while Henry smashed away on his drums, often standing and pacing between fills. Their surf/blues/punk/rock sound has gelled in the past couple of years, providing a unique brand in an otherwise crowded Seattle alt rock market. Grant’s reverb-laden, jangly, gawky guitar riffs were augmented by Gianni’s creative, dance-able bass melodies and the crowd totally got into it. At one point you could actually feel the floor bowing from all the moshing. Toss in some humorously awkward monologues by Gianni and a mini drum solo by Henry, and you got a solid start to the night.

Wild Powwers has become one of Seattle’s hottest bands in 2016. Although “just” a trio, Lara Hilgeman (vox/guitar), Lupe Flores (vox/drums) and Jordan Gomes (bass) have found a way to create a huge sound that is both encompassing and captivating. Lara’s forceful, angry vocal style is supported by Jordan’s intense, pick-driven bass lines, but what captures as much of the audience’s attention is Lupe’s heavy, intense drumming. Sporting Motley Crue, Motorhead and Bangles t-shirts, Wild Powwers delivered a “piercing and incredible show” (overheard dialogue after the show) that had listeners in the back of the venue head banging more violently than those in the front.

Headliner Thunderpussy not only provides a unique and memorable band name, they also deliver a unique and memorable show. Need proof? They’ve only existed for two and a half years and have no music for sale, yet they consistently sell out venues like Neumos and perform at huge events like the Capital Hill Block Party and Sasquatch!. When this Seattle foursome took the stage, the sold-out crowd already knew their part – start dancing and screaming from the first song to the last encore. Molly Sides (vox), Whitney Petty (guitar), Leah Julius (bass) and Ruby Dunphy (drums) were prepared to return the favor, leveraging feathery boas, body-hugging tights, leg kicks from hell, wincing back bends, audience-induced crowd surfing, dazzling videos, massive smoke plumes, stage cartwheels and synchronized backup dancers for the event. Molly’s vocals were resonant and commanding while the entire backline dispensed rock fierce enough to make (early!) Aerosmith shake in their jockstraps. You can’t help but get the impression that this is one of the hardest working bands in the Northwest. They are a practiced, perfected, choreographed, color-coordinated music machine who completely embrace their femininity while not taking any crap from the sex-shaming parts of America. Halfway through their set, they referenced what an awful year 2016 has been, displayed a dumpster fire video and asked everyone there to participate in a therapeutic group hug (which they did). Covers of Jefferson Airplane’s “Somebody to Love” and Led Zeppelin’s “Dazed and Confused” (complete with violin bow) brought loud cheers from the audience but it was their original material (self-titled “Thunderpussy”, “Welcome to the Disco”, “Fever”, etc.) that generated the largest mosh pits of the night and made me worry for the photographers up front.

Photos by Christine Mitchell. You can find more of her dramatic concert photography on Instagram.